It starts like any other “unboxing” video you see on the internet, where someone films themselves unwrapping and assembling a coveted new toy, usually something digital.

Except in this video, Simon Zoric unboxes a ventriloquist’s dummy – one that looks just like him.

The artist carefully dresses his mini-me in matching clothes and props him on a chair, then puts earbuds around its head. As David Bowie’s Sound and Vision kicks into gear, the doll gently springs to life, as if contemplating what it sees and hears as if for the very first time.

“I thought it was very rich idea: If we could talk to each other, what would I say to myself?” says Zoric.

His is one of many works showing at the annual Octopus exhibition at Gertrude Contemporary, with this year's theme Ventriloquy. As curator Joel Stern explains, that doesn’t strictly have to mean a talking dummy on a knee. 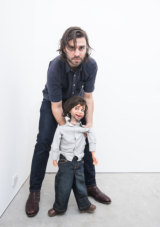 “Ventriloquy has a prehistory that goes back hundreds, if not thousands, of years,” he says, citing the Ancient Greek practice of gastromancy, which said stomach noises were messages from the dead. “Really what it’s about is the dislocation of the voice from the so-called speaking subject."

It’s there when, say, your boss toes the company line, or when someone begins to sound like their new partner. And we’re all familiar with the "mouthpiece" metaphor in politics: think Trump’s puppet to Putin’s master, or George W. Bush’s to Dick Cheney’s.

“So much of what we hear our politicians say, or other people say, doesn’t really sound like the voice of a speaking subject but rather something speaking through them [as a proxy],” says Stern.

Danielle Freakley’s work Your Second Hand is a pop-up shop with pre-loved clothes for sale; the price is that you’ll “unconsciously inherit certain thoughts and behaviours from its previous owner”.

The video installation Ego as Echo sees artist Makiko Yamamoto repeat phrases in a distorted voice, while another screen flashes words that are discombobulatingly similar, but yet not quite. It’s a play on the practical mechanics of ventriloquy: you can’t say a “B” sound without moving your lips, so the trick is to replace all “Bs” with “Fs”.

Most of the works on show are new but Zoric's has been resurrected from his VCA honours year a decade ago. He had the dummy manufactured with the intention of speaking through it but in the end he was lost for words.

"I couldn't bring myself to do the thing I was supposed to do with it," he says. So in the video work, the mini-Simon never speaks, giving it a "gentler" and "weirdly childlike” quality as Zoric instead inducts it into his way of life: reading in bed together, listening to music or watching Annie Hall.

Artist collective Liquid Architecture, where Stern is a joint artistic director, has also curated live performances to complement the exhibition – from morse-code poems to historic recordings of seances, an audition for Buffy: The Vampire Slayer and an aural ode to the end of the world.

Octopus 19: Ventriloquy is at Gertrude Contemporary, Preston until July 20 with performances at West Space, CBD on June 17.