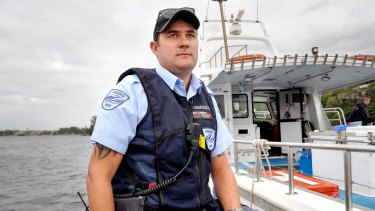 Produced for international exposure through the Discovery Network and brought back to Australian audiences, this wet and occasionally wild observational documentary has both a familiar format and a familiar setting. Ranging across those who work on Sydney Harbour – police officers, tugboat pilots, divers, and boatyard hands all feature – it skips from job to job, waiting for manageable mayhem so that authoritative narrator Hamish Michael can declare, "It will be all hands on deck". Risk is always imminent, but the edit keeps everyone calm– a police commander is clipped and professional even as he surveys a police boat forced onto rocks after the recovery of a submerged car has gone wrong. Unique moments are fleeting: the Opera House looks like an alien structure when seen from a wheelhouse during a storm.

Nigella at My Table

For a self-described domestic goddess, there's an egalitarian thread to Nigella Lawson's cooking: she truly wants the best for all her ingredients. Even as she's deploying "snaffled" and "squidgy" in successive sentences, the British broadcaster and author is explaining how you should crack an egg into a tea strainer to make for better Turkish poached eggs or extolling the many uses of sea salt. This genuine love of food's endless strands is the necessary tonic to the fantasy of her television act – the studio pretending to be her home (as if it's that's cosy), the 3am making of emergency brownies in nightwear shot at closer to 3pm, and quite possibly the satisfied actors playing the famished friends supping with smiles at her table. Nigella has taken the contradictions of television's culinary obsession further than any contemporary, and this latest series shows no sign of breaking her note-perfect spell.

Valley of the Boom

Given that Facebook is a global threat to democracy and we all know at least one adult who should never be allowed online, an irreverent and somewhat scornful take on the commercial birth of the internet is a timely proposition. Created by writer/producer Matthew Carnahan (House of Cards), Valley of the Boom launches in 1994. when approximately 15 million people worldwide had access to the internet.

It follows the fortunes of three start-ups – an approach that implicitly links digital culture to commercial outcomes – that manage to span the corporate, the committed, and the criminal. The format is the increasingly popular, and often frustrating, docudrama approach, where talking head interviews and explanatory detail are punctuated by scripted dramatic scenes. Often this makes for two shallow takes pooled together, but Carnahan is aggressively disruptive – characters such as Marc Andreessen (John Karna), who designed breakthrough web browser Netscape, break the fourth wall to explain their motivation and critique colleagues, while wild-eyed Silicon Valley newcomer Michael Fenne (Steve Zahn) has a monologue illustrated by an interpretative dance sequence.

Actors sometimes have to deliver mere slivers of dialogue, but when they're exceptional actors such as Bradley Whitford it can work. The underlying message of this six-part National Geographic series is that the internet was always a worry because of the people who commercialised it, and you can laugh your way through this amusing if slight history all the way to today's bitter reality.