THE countdown to Christmas is officially on as a number of top brands have revealed their festive adverts.

But many people will be waiting for the Coca Cola Christmas advert before they feel like holidays really are coming. 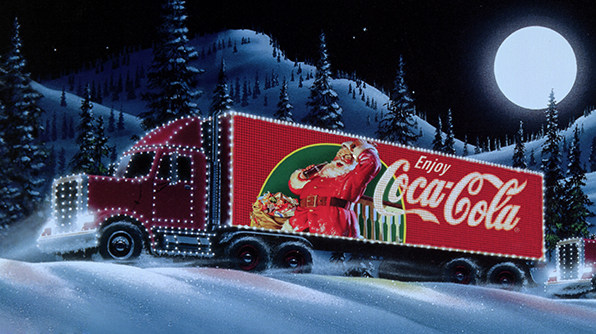 Which Christmas ads are out already?

This week has seen the launch of the much-loved John Lewis advert, featuring a young boy helping an alien experience her first Christmas.

And M&S has unveiled its advert starring none other than Percy Pig himself.

Online retailer Very was the first to unveil its 2021 advert. Themed around getting started early, it arrived in October.

But the Coca-Cola Christmas advert for 2021 is currently nowhere to be seen, and it's always a favourite of festive fans counting down to the big day.

The firm's iconic red truck first appeared on screens in 1995, with the catchy "Holidays are Coming" song soon becoming associated with the run-up to Christmas.

Last year's advert had viewers in tears and was named best festive ad of the year.

The ad depicted one dad's epic journey to deliver a Christmas letter to his daughter.

When will the Coca-Cola Christmas ad be out?

Last year's ad launched on November 11, so festive fizzy pop fans may not have much longer to wait if Coca-Cola is aiming for similar timing this year.

While there has been much excitement about the festive ads that have already hit screens, many people have taken to social media to say they're waiting for the Coca-Cola ad before the Christmas countdown can really begin.

One Twitter user said: Everyone says Christmas starts on nov 1st nope it starts when the Coca Cola ad comes on the tv them is the rules."

Another agreed: "Firm believer that it’s unacceptable to start Christmas celebrations until the Coca-Cola van ad comes on the tv and i stand by that."

Coca-Cola has not yet revealed when this year's advert will land, but hopefully fans won't have much longer to wait.

Which other Christmas ads are we still waiting for?

There are plenty of other festive adverts still yet to hit screens in 2021.

Lockdowns earlier in the year have meant that some firms weren't able to start their planning until later than usual, which could potential cause delays.

None of the major supermarkets have yet launched their Christmas adverts, including Asda, Sainsbury's and Morrisons.

Other favourites not yet on screens including the McDonald's Christmas ad and Amazon.

The likes of TK Maxx and Waitrose are among other that a widely anticipated by those counting down to Christmas.

If you can't wait to get into the festive spirit, we've rounded up the best Christmas ads ever.