Wendy Williams addresses on-air behavior after fans raise concerns: 'I try to do the best that I can'

As we celebrate Hispanic Heritage Month, it's important to recognize the strides The George Lopez Show, Jane the Virgin and Ugly Betty made for the Latinx community. 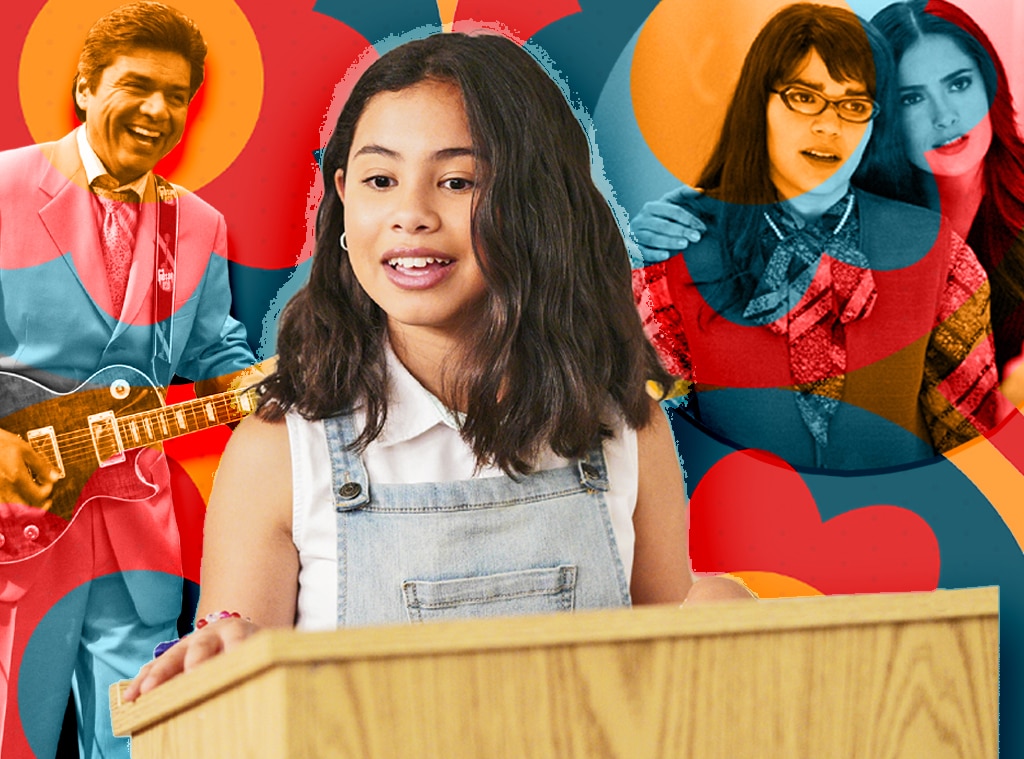 I can't hear the sound of War's "Low Rider" without imagining Belita Moreno bouncing on a trampoline, palm trees behind her.

Every summer, my sisters and I would stay up until two or three in the morning, watching TV or playing games in the family room. We'd inevitably fall asleep on the couch and one of us would wake up to find the George Lopez show playing, before turning off the TV so our parents wouldn't scold us.

But the George Lopez show was not just the background to those late nights spent with my siblings. It was the show my family came back to time and time again, because, one, it was the only show we could all agree upon and two, we could understand the humor and emotions of it.

Rarely in my life could I or anyone in my family relate to a series in the way we could relate to the George Lopez show. And this is because, for once, a Mexican-American family was depicted as normal, every day people—not gang bangers or struggling immigrants.

Not to say that the struggle wasn't real.

Like George (George Lopez) and Angie (Constance Marie), my parents experienced micro-aggressions on a frequent basis. I can't even count the amount of times someone told my dad that he looked just like their gardener, or when my mom was recruited as a translator for a neighbor's housekeeper.

And those were the issues that were confronted with humor and empathy on the George Lopez show.

Seeing that my parents weren't alone in these challenges offered a sense of comfort and validation. As cheesy as it sounds, it was like someone was telling us, "I see you and I know what you've been through."

Katharine McPhee Seemingly Confirms Her Pregnancy in a Subtle Way

Sure, we watched series like 7th Heaven or Gilmore Girls, but we certainly couldn't relate to the struggles of a middle-class white family. I really couldn't relate to Rory Gilmore and her life as a private school student, or her mother's fraught relationship with her wealthy grandparents.

And I would be lying if I said I wasn't bitter when I watched that show. I'd roll my eyes at their frivolous problems, asking myself, "Who would even watch this?"

It was when Ugly Betty premiered that I felt my temper quell. America Ferrera's quirky character was again someone I saw myself in, and her aspirations in the fashion world mirrored my teenage dreams for the future.

With Betty, I imagined a version of me in my twenties, climbing the ranks of the fashion world and living in the Big Apple. A 12-year-old me never questioned whether I could achieve that dream, because I saw it being done, albeit on TV.

Jane the Virgin was the next series to bring me contentment. It was the soapy, emotional drama series that I needed in high school, a time where sexual temptation was at the forefront of my mind.

I've said it before, but I'll say it again: I simply saw myself in Jane (Gina Rodriguez).

By this time, I had decided that I wanted to be a writer, but the confidence Ugly Betty instilled in me was waning with every college application I filled out. There was this terrible voice in my head that reminded me the odds weren't in my favor and it wouldn't work out.

But there was Jane, dealing with the same coming-of-age experience, on top of an unplanned pregnancy which wasn't even her fault. She was navigating these struggles with the determination I wished to have, reminding me that my doubts were all in my head.

More than that, Jane the Virgin was a show about family. Every week, my mom and I would watch it together, and every week, we'd end up crying or sharing a deep conversation about womanhood and what it means to doubt one's self so deeply.

I like to think that because of Jane the Virgin, I have a greater appreciation of my struggles and my family, both of which helped me to get where I am now.

As one can see, I'm a writer. I'm not living in the Big Apple like Betty, but I did live in Los Angeles, Calif. in the B.C. (before COVID) era. Currently, I reside in my parent's guest bedroom, a far cry from what I imagined 10 or 12 years ago. But if the aforementioned shows taught me anything, it's that there's always going to be some drama, otherwise things get boring.

There are benefits of living with my parents. I get a complete breakfast most mornings, there's AC and, my favorite of all, I get to see my 3-year-old niece almost every day.

She's a tiny little thing that loves to dance, sing and go through my belongings. But recently, she's been very into playing doctor, courtesy of Disney's Doc McStuffins.

It's through my own experiences and her obsession with that cartoon that I've seen representation matters.

Right now, she imitates everything she sees and doesn't question whether she's capable of achieving her dreams, a quality I envy. But I know that in a few years, she's going to recognize that she's a woman and she might start to doubt her current goal of becoming a doctor.

It's for this reason that I'm grateful more Latinx actors are being shown onscreen. There's still progress to be made, but my hope is that my niece seeing girls like Tess Romero on Disney's Diary of a Future President will give her the same drive that Ugly Betty, George Lopez and Jane the Virgin instilled in me.

Celebrities
This is Paris director Alexandra Dean is speaking out about what it was like to interview Kim Kardashian for Paris...
Lifestyle
Every Brit loves a roast dinner and one of the best bits is a tasty, fluffy Yorkshire pudding.However, while you...
TV & Movies
EastEnders has aired the final scenes of fearsome Ellie Nixon as Mica Paris’ guest role in the soap has come...
World News
Tonya Williams, perhaps best-known as fan-favourite Olivia Barber Winters on soap opera The Young and the Restless, has also been...
Beauty
Facials are magic when it comes to transforming meh-feeling skin into glowing, blissful radiance in less than an hour. Even...
Fashion
1995 was a vastly different time, both in the worlds of sports and sneakers. The high-flying Shawn Kemp and his...
Recent Posts
We and our partners use cookies on this site to improve our service, perform analytics, personalize advertising, measure advertising performance, and remember website preferences.Ok