Will you swap pigs in blankets for stags in quilts? TOM RAWSTORNE tests the unlikely new versions of our festive favourite

What could be better than pigs in blankets with your Christmas dinner? Well, what about a stag in a quilt, a chick in a blanket, or even a steaming dish of pig-in-blanket-flavoured macaroni cheese?

This year, everyone’s favourite trimming — mini pork sausage wrapped in bacon — has been given a radical makeover.

It’s no surprise that retailers are keen to capitalise on our liking for a PIB, which topped one poll of our favourite Christmas foods this month, and narrowly lost out to spuds and turkey in another. One in four of us claimed they prefer PIBs to everything else served up on Christmas Day. 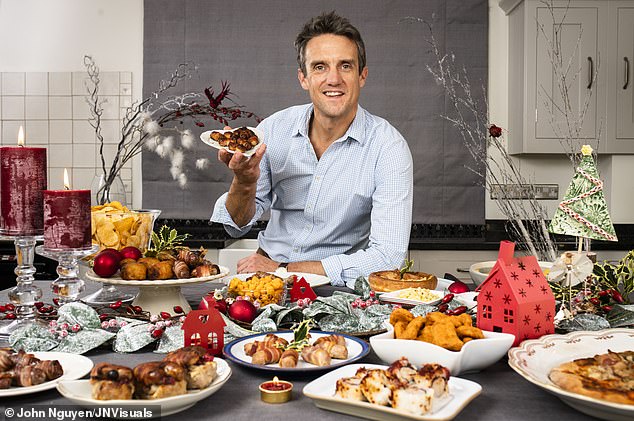 Thought to have originated in Czechoslovakia or Germany, the earliest written record of pigs in blankets is in U.S. chef Betty Crocker’s Cooking For Kids, which was published in 1957. They have long since become a staple of the Christmas dinner table, but now you can indulge in pork pimped with a fruit glaze or versions which use chorizo, venison or chicken.

And it’s not just the festive feast where they take centre stage — Britain’s supermarkets now top pizzas with them, wrap them in sushi rice as well as add them to macaroni cheese. And you can pick up packs of ‘special edition’ crisps and nuts infused with the flavour, too.

Here TOM RAWSTORNE goes the whole hog for an exhaustive test of the best shop-bought pigs in blankets — and the unlikely versions they have inspired . . . 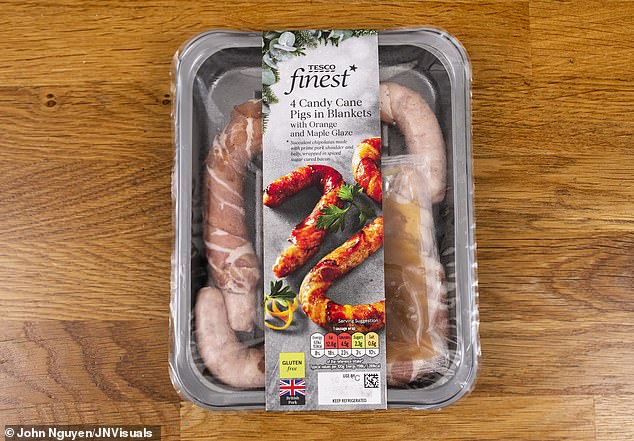 Tom said Tesco 8 Candy Cane Pigs in Blanket with Orange and Maple Glaze (pictured) has a pleasant, sticky sweetness with every bite

Top marks for inventiveness for whoever dreamed up this festive twist. In reality, it’s nothing more than a normal pig in blanket with a kink in the neck! But the addition of maple and orange glaze guarantees a pleasant, sticky sweetness with every bite. 3/5

Ordered online from the foodies’ favourite butcher, these PIBs are the most expensive of the lot, costing an eye-watering 90p each. But the quality of the meat is noticeably better than the rest, with more texture and less mush, while the apricot adds a subtle hint of sweetness without being overwhelming. 5/5

M&S Our Best Ever Pigs in Blankets, £5, ocado.com 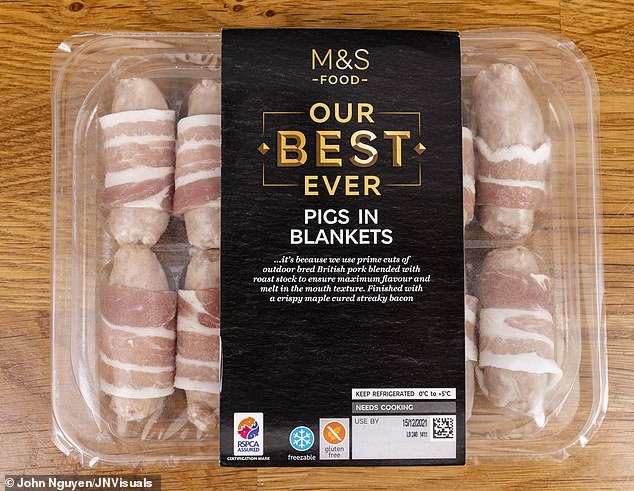 These plump little piggies retain their moisture nicely during cooking — possibly due to the pork stock that is mixed in with the prime cuts of pork that make up the sausage. The maple-cured streaky bacon crisps up well, delivering a traditional-tasting mouthful. 4/5

PIGS WITH A TWIST

These smoky, Spanish pancetta-wrapped chorizo sausages come with a pack of sticky honey glaze that you baste on towards the end of the cooking process. Meaty and flavoursome, they taste great but are so salty you won’t manage more than a couple at a time. 3/5 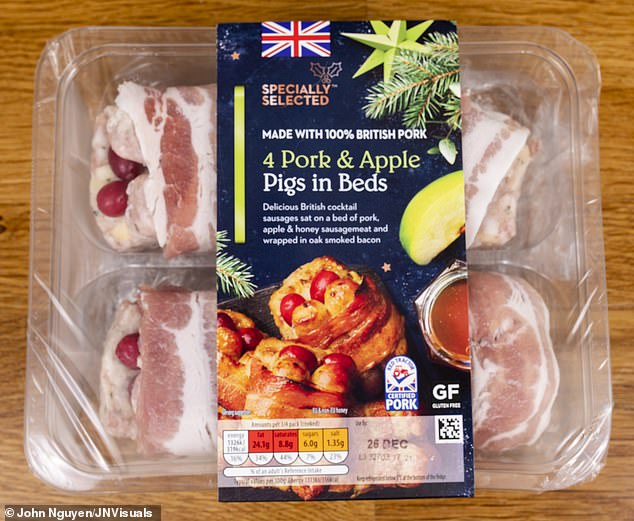 New for 2021 and ‘Best Pigs in Blankets’ at the Quality Food Awards, these chunky chaps feature bite-sized pork piglets in an apple and honey meat ‘bed’, nestled on cranberry ‘pillows’ and tucked up under a ‘blanket’ of smoked bacon. They are fun, interestingly flavoured and substantial — one per person would be more than enough. 4/5

Unsurprisingly, the overpowering waft of truffle assails the nostrils upon opening these little pigs. But once cooked, that doesn’t really translate into a particularly distinctive taste. A good Christmas table talking point if nothing else. 2/5

Made with a mix of British wild venison and pork, you can instantly taste the difference when you bite into these. The meat is sweeter, more dense and requires a bit more of a chew. So, gamey —but not a game-changer. 2/5 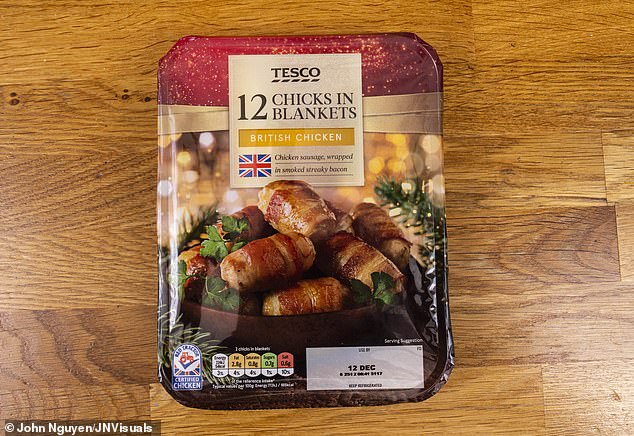 Tom said Tesco Chicks in Blankets (pictured) look the part, but are dry and tasteless

Chicken may be our most-consumed meat, but it simply doesn’t deserve a place in festive bangers. While they come out of the oven looking the part, they are dry and tasteless — and would bring precious little cheer to your meal. 1/5

If you’ve ever found yourself yearning for a battered saveloy on Christmas Day, then here’s your answer. While you can’t really taste the bacon wrapped around the pink, batter-encased sausage meat, the end result has a fish and chip shop flourish. And none the worse for it! 3/5 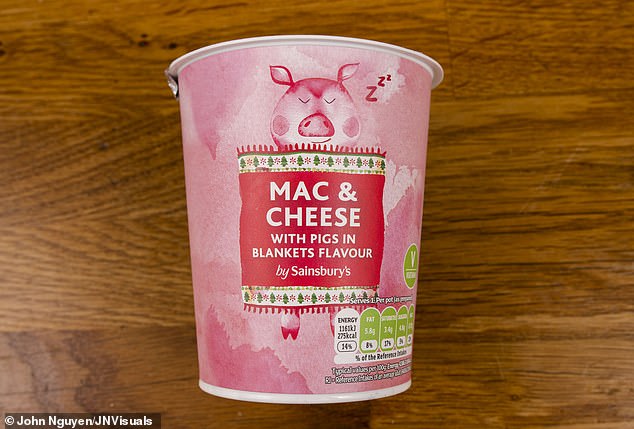 A pot of dried pasta in a cheese sauce with a pigs in blanket flavour — just add boiling water and leave to stand for five minutes. Then put straight in the bin! Smells strongly and unpleasantly of cheese and even after the allotted time there were crunchy bits amid the goo. 0/5

These ‘limited edition’ battered chicken nuggets emerge from the packet looking as orange as Donald Trump. They crisp up well in the oven but the PIB flavouring just makes them taste like a chicken-filled Frazzle crisp. 1/5 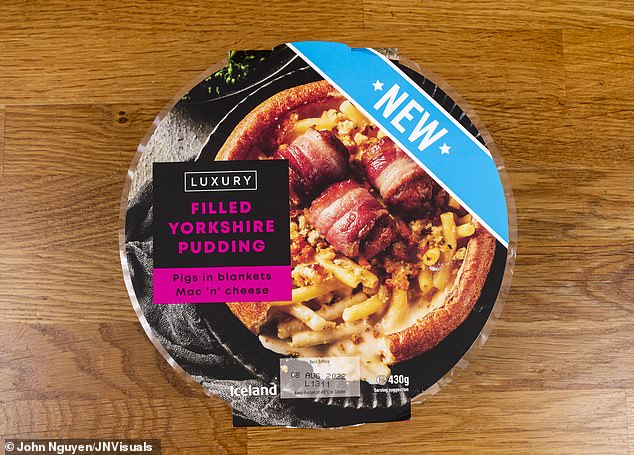 Not for the faint-hearted, the pigs in blankets are delicious but the stodge levels of the macaroni, cheese and yorkshire pud are utterly overwhelming. Expect to need a lie-down afterwards. 3/5

Finished with pigs in blankets, turkey, garlic and herb crumb, creamy mozzarella and a scattering of juicy cranberry sauce, this is an impressive-looking pizza. The salty pork works well, but one of the round PIBs rolls off during the cooking process. 4/5 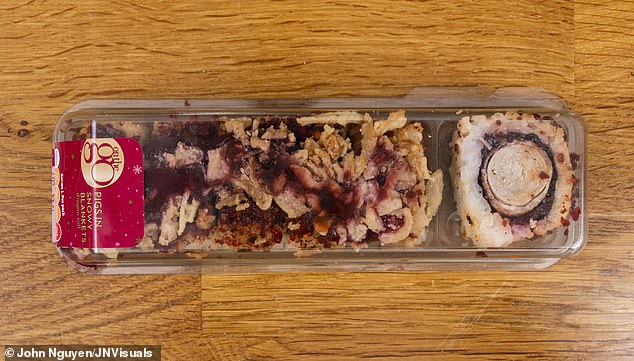 For those who can’t get past lunchtime without yearning for their PIB hit, these snacks may be the answer. Little rolls of sausage and bacon with cranberry sauce are rolled in rice with a topping of sweet chilli sauce, crispy onions and paprika flakes. The cranberry flavour comes through nicely but the rice is dry and chewy. 3/5

Forget toad in the hole — it’s Christmas, so this mini Yorkshire pudding is filled with a bacon-wrapped piggy. They are very well presented, if a touch dry once cooked, but would work well served as a canape. 4/5 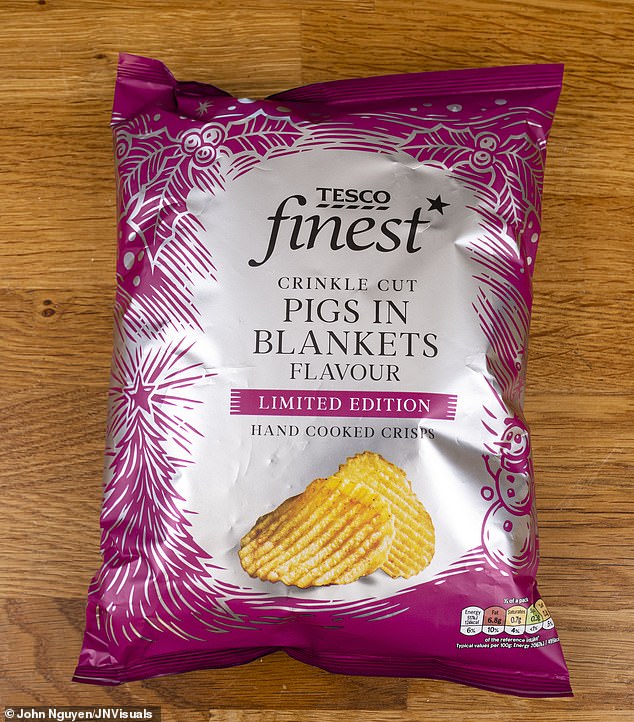 A substantial, crinkly crisp, but in a blind tasting there’s little to suggest the flavour is pigs in blankets. Just a general smoky meatiness. 2/5

Each nut is encased in a crispy coating. Again, the flavour is hard to pin down, as is the point of this product. If life’s too short to stuff a mushroom, a similar sentiment must surely apply to peanuts. 1/5

While these crisps are certainly full of flavour, I struggled to pick up anything more than the merest hint of bacon. 2/5