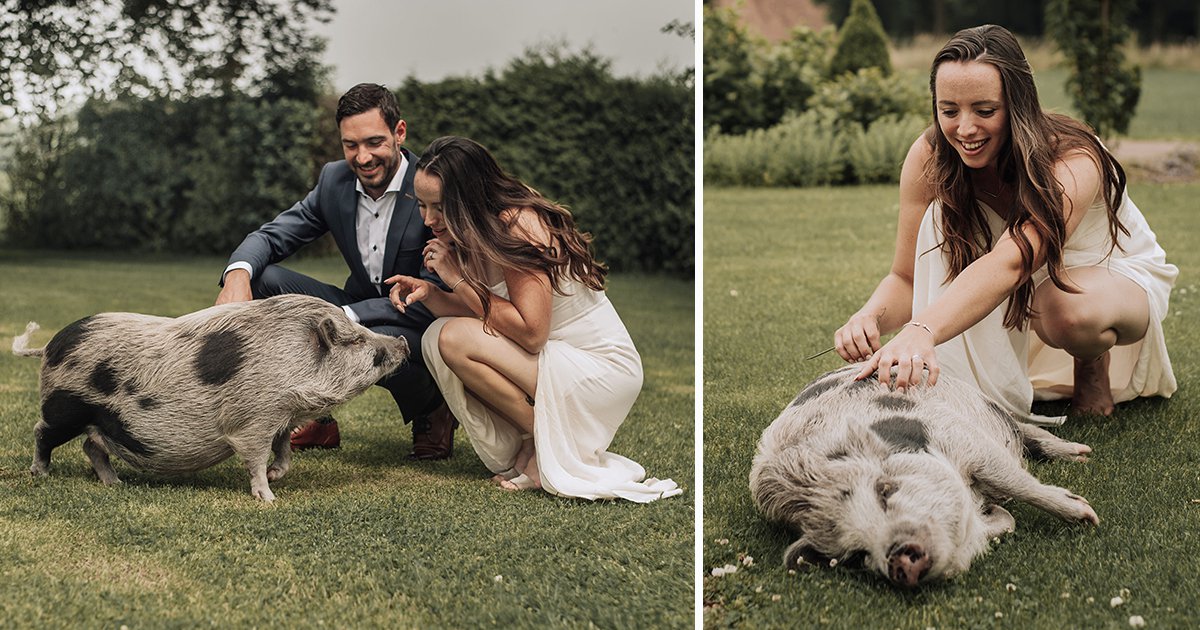 Usually you don’t want the bridesmaid to upstage the bride, but in this case, we’ll make an exception.

When plumber Hannah Devine, 25, and her carpenter husband Glenn Devine, 28, tied the knot in Holland in June this year, they knew they wanted their pet – a 20-month-old pig called Babe – involved.

When the couple discovered that some of their guests couldn’t fly out from England to make the wedding location, they found the perfect role for her, bringing the pig in as a bridesmaid.

It worked out well for the pair, who said Babe was well behaved during the ceremony.

Hannah said: ‘We knew she would be centre of attention on the day.

‘With coronavirus making everything much more difficult, we decided that we wanted our wedding to be just about us, as our family and friends from England couldn’t make the travel with the regulations at the time.

‘Of course, we celebrated with our family and friends in Holland and Babe’s role for the day meant that she could fill the spaces of everyone that couldn’t be there.’

The pig was a huge hit, and did a great job posing for photos with the newlyweds.

Hannah continued: ‘To say she did a good job is an understatement – she was so calm during the photos and listened to us perfectly.

‘We expected something may go wrong and prepared some raspberry treats for her just in case, but fortunately the big day wasn’t one of those where she pretends she’s starving and eats like a pig – excuse the pun.

‘We know for sure she enjoyed the day; she had all sorts of treats from us and many others and took herself off to bed a little earlier than normal.’

The couple, who met in the Caribbean three years ago, now live in the Netherlands.

They decided to buy their pig as they were looking for a pet that would fit into their hectic schedules, so traditional pets such as dogs were out of the question.

Hannah said: ‘Glenn and I spoke lots about getting a dog, however with both our busy work schedules we decided it just wasn’t possible.

‘On our first trip to the farm we put a deposit down for a piglet that would be arriving six weeks later.

‘However, we received a call earlier than expected, as she had a little piglet left over from a previous litter that needed a home.

‘We straight away agreed to take her home, and like that she was part of our little family.’

‘She is now a like a spoilt, single child,’ said Hannah.

‘For the most part, we would describe her best as sweet, dramatic and a little bit a mamma’s girl.

‘I once read someone describing owning a mini pig as like having a three-year-old child with a personality of a cat, but with sledgehammers as feet, which I would say is very accurate.

‘She never fails to keep us on our toes and to keep the smiles on our faces.

‘We couldn’t have imagined our wedding day without her.’