PARIS — Naomi Osaka, the No. 1 women’s seed at the French Open, was beaten in the third round Saturday by Katerina Siniakova, an unseeded Czech player better known for her doubles prowess.

Siniakova’s 6-4, 6-2 upset underscored the wide-open nature of women’s tennis. Of the 32 seeds, 22 have been eliminated or have withdrawn before the fourth round. Ten of the top 16 seeds are also out, although last year’s finalists — the champion Simona Halep and the runner-up Sloane Stephens — remain in contention.

Osaka, the 21-year-old Japanese star, is not yet a clay-court maven. She has not won a title on the surface is still figuring out the footwork. She took a few moments to practice her sliding between points Saturday.

But her defeat on a hot, sun-drenched day on the Suzanne Lenglen Court qualifies as a significant upset.

She defeated Siniakova, 6-4, 6-0, in their only previous meeting, which came in the first round in Doha last year. But that was on a hardcourt, which remains Osaka’s happiest hunting ground.

This was on red clay, and though there was no doubt who had the edge in firepower, Siniakova played a remarkable match by varying her tactics and spins and by extending rallies with her fine defense.

Above all, she defended her serve effectively, saving all seven break points she faced while breaking Osaka’s more forceful serve on three occasions. 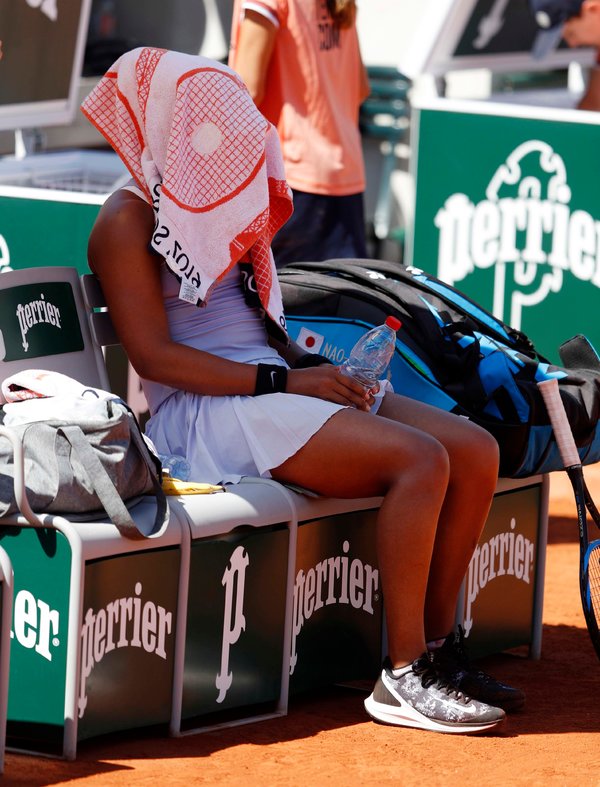 Osaka made errors by the bunch from the baseline: 38 unforced errors in all, compared with Siniakova’s 13. Osaka repeatedly struck the net cord with her huge groundstrokes and service returns. By the end, she was missing by much larger margins, as Siniakova reeled off the last five games to close out the match and put herself in the fourth round of a Grand Slam singles tournament for the first time.

The curly-haired Siniakova, daughter of a Russian father and Czech mother, has an unorthodox serve: She keeps her right arm extended instead of bending it at the elbow in the middle of the motion. But she clearly fits right in at Roland Garros, where she won the doubles title here last year with her compatriot Barbora Krejcikova.

“For sure it brings out my best tennis,” said Siniakova, who followed that win with the doubles title at Wimbledon. “I hope it will continue.”

For Osaka, who will remain No. 1 in the rankings after this tournament, the next stop will be on grass. But she finds herself in a vulnerable position.

Her victory over Serena Williams in last year’s U.S. Open final made her a global star, increasing her sponsorship contracts and earnings exponentially and making her a particular focus of Japanese news coverage. She followed up by winning the Australian Open, showing a rare ability to summon her best tennis on the biggest points.

But she has been unable so far to extend that dominance since splitting with her coach Sascha Bajin unexpectedly after her victory in Melbourne. She retained her fitness coach Abdul Sillah, whose work was also fundamental in her rise to No. 1 and hired Jermaine Jenkins as her new coach. Jenkins previously worked as Venus Williams’s hitting partner and is a former collegiate player at Clemson University.

But Osaka has yet to reach another tour final since the Australian Open and has yet to play another semifinal. She retired before her semifinal at the Stuttgart Open in April with an abdominal strain.

The duel with Azarenka was among most compelling matches of the women’s tournament, and Osaka started much more convincingly against Siniakova. She put Siniakova under consistent pressure from the beginning and projected calm confidence while Siniakova looked anxiously at her own team in the players box.

But as the match developed, Siniakova kept saving break points and Osaka kept making mistakes, and by the end, the better clay-court player won.