The quarterfinals of the Australian Open begin Monday night, with a mix of Grand Slam event champions and unexpected first-timers in the final eight for each draw. With the number of matches reduced, fans no longer need to divide their attention.

Here are some matches to keep an eye on.

The times for individual matchups are estimates and may fluctuate based on when earlier play is completed. All times are Eastern. 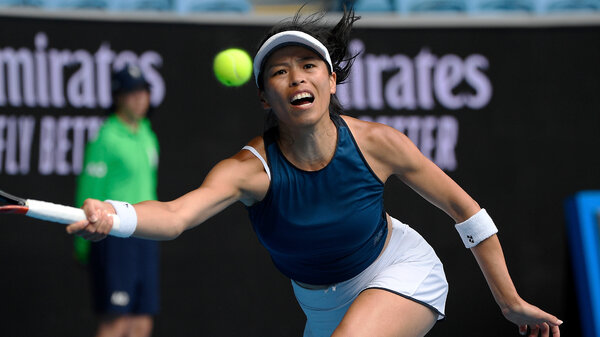 When Hsieh Su-wei was asked in 2019 why her matches with Naomi Osaka frequently ended in three sets, she brightly replied, “We love each other too much.” It may have been a joke, but it underlines what makes both players a joy to watch. There is a love for the game that bubbles up in distinct ways for each of them.

Hsieh’s inventiveness has a special place in the modern game. She plays with two hands on both sides, mixing unorthodox shots with consistently flat rally points that she can place deep in the court. It can be a struggle for any player to adjust to Hsieh’s play, especially because she can shift to a different style if the first one is no longer working. This has led her to eight victories over top-10 players in the last four years, and now Hsieh has become the oldest major quarterfinal debutante at 35.

Osaka is one of the archetypical aggressive players on tour, with a mental resolve that can produce stunning statistics. She was two match points down against Garbiñe Muguruza in the round of 16, and then did not commit an unforced error in the next 22 points while hitting seven winners to secure the match for herself.

Aslan Karatsev of Russia has become the first first-time qualifier in over 25 years to reach the quarterfinals of a major tournament. Early in his round of 16 match against Felix Auger-Aliassime, he struggled with hitting through the ball, and was overwhelmed by the Canadian’s shotmaking. Starting in the third set, however, Karatsev raised his level of play. As he had with his other three opponents, he began dominating Auger-Aliassime with powerful baseline shots and impressive returns.

Grigor Dimitrov of Bulgaria, the 18th seed, has had an easy trip to the quarterfinals. He has not dropped a set and did not need to complete his third-round match against Pablo Carreño Busta, who withdrew with an injury. Dimitrov, the winner of the 2017 ATP finals, has never been past the semifinals at a Grand Slam event (but he has been to the semifinals in three of the four). His one-handed backhand has been sharp, and because he is relatively well rested, he may have an advantage against the slightly worn-out Karatsev.

Simona Halep defeated Iga Swiatek, the reigning French Open champion, in the round of 16, avenging her loss in Paris in a match in which she won only three games. Afterward, Swiatek praised Halep’s ability to adjust to the game, saying, “That’s the difference between the champions and less-experienced players, because I didn’t feel like I had many options.” Halep’s adaptability helped her reach the final of the Australian Open in 2018. Having won two major titles since then, she is confident she can overcome any opponent who gives her even a small opening to exploit.

In her round of 16 match against Aryna Sabalenka, Serena Williams persevered over a young, powerful challenger by digging in on defense and forcing Sabalenka to be overly aggressive, which led to unforced errors. For Williams, a convincing win over a top-10 player is no longer a guarantee. But it is a statement that the greatest player of the modern era will continue to fight for a record-tying 24th title in a Grand Slam event.

Novak Djokovic of Serbia, the world No. 1 and reigning Australian Open men’s singles champion, has struggled with an abdominal injury in this year’s event. He admitted to having taken “the maximum amount of painkiller allowed” in his third-round match against Taylor Fritz. After his victory over Milos Raonic in the round of 16, he disclosed that he had made the decision to play the match only hours before it.

Alexander Zverev of Germany, the sixth seed, reached his first Grand Slam event final in the United States Open, losing to Dominic Thiem in five sets. Zverev has lost his last four matches against Djokovic, though he did push him to three sets in the ATP Cup this month. With Djokovic struggling, Zverev can capitalize, but he will need to avoid the temptation to elongate points in the hope that Djokovic will be worn down. Aggressive, positive play will be required to unseat the defending champion.