Sir Ben Ainslie says INEOS TEAM UK will have to sail “the series of our lives” as the winner-takes-all PRADA Cup Final continues on Sunday, live on Sky Sports.

The team are preparing for a significant day of racing against Luna Rossa Prada Pirelli in the first-to-seven-wins series that decides which challenger will take on Emirates Team New Zealand in the 36th America’s Cup match.

Going into the first day of action, INEOS TEAM UK had spent the 20 days between the end of the PRADA Cup Round Robins, balancing the trade-off between developing race boat BRITANNIA in the shed, and getting out on the water training.

For Luna Rossa Prada Pirelli, they first had to beat New York Yacht Club American Magic in the PRADA Cup semi-finals, before they were able to make modifications and developments to their boat.

Throughout the competition, all of the America’s Cup competitors are impacted by the wind conditions on race days and Saturday saw lighter airs in Auckland, as opposed to more blustery conditions experienced during the PRADA Cup Round Robins.

During the warm-up races before Christmas, INEOS TEAM UK struggled in the lighter airs and with the amount of intelligence and information they have about their own performances, Ainslie knew that Saturday was going to be a difficult day at the office.

“It’s still the same story [with lighter air challenges]. We kind of expected that, to be honest, but it’s not what you want to see, or the performance that we were hoping for,” Ainslie said to wife Georgie in an exclusive interview for Sky Sports News.

“The second race was a much closer affair. The breeze had come up quite a bit, we had a good start and managed to force the Italians away, but they just had a click of pace on us.

“They sailed a good race to be fair, they didn’t make any mistakes and there weren’t any passing lanes, so no complaints from us.” 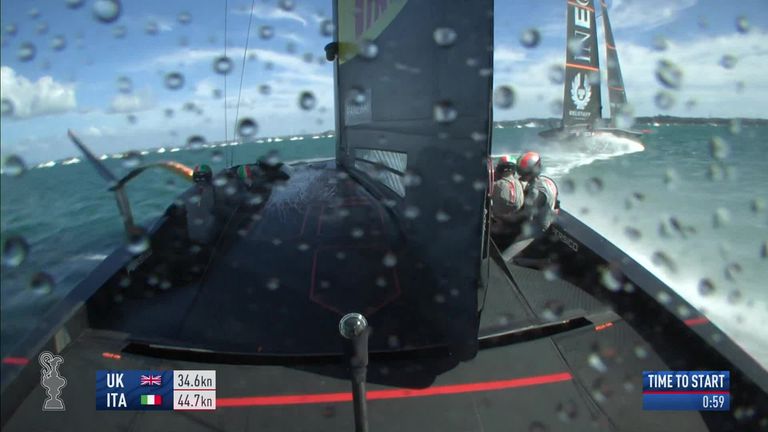 When it comes to finding the answers to INEOS TEAM UK’s performances in the lighter airs, the fact that they’re now within a racing series makes it slightly more challenging, as the team principal and skipper explained.

“We are where we are, we’re trying to get better every day. Every day we sail these boats we get better and we work something out, but with the light air performances, we’re reaching the limit of what we can do – certainly in the middle of a race series as we are now,” Ainslie said.

“It’s clear that if we’re going to beat Luna Rossa, which we knew anyway, we’re going to have to sail the series of our lives to beat those guys in that boat.”

With racing occuring on consecutive days for the first two days of the PRADA Cup final, both outfits have very fast turnarounds and limited time to dwell on prior outings. Instead, the focus for the British team will have immediately switched to picking off victories on Sunday in order to draw the first to seven wins series, back level.

“They certainly had some good pace. We’ve just got to sail better, push harder and we’re probably going to have to take more risks if we’re going to beat them,” Ainslie concluded.

“The forecast for tomorrow [Sunday] is quite good, it’s pretty similar to the second race so 13-15 knots, at least it was the last time that I looked, so fingers crossed that it’s stayed the same or maybe even gone up a bit.