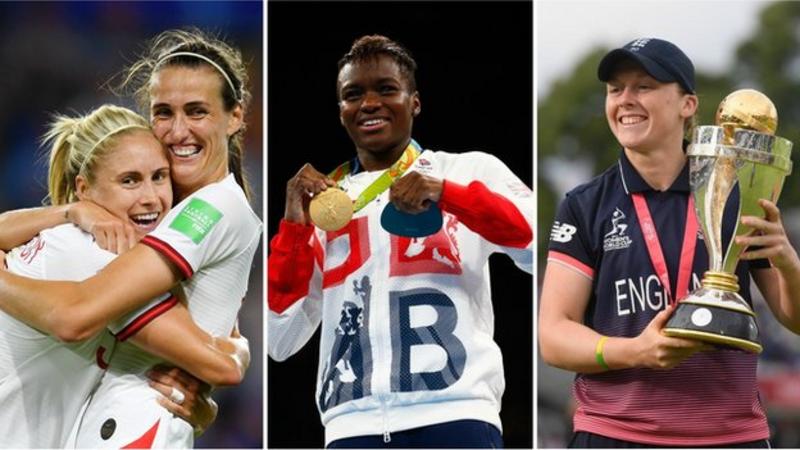 I must admit, I never thought I’d see the day when tennis legend Billie Jean King was tweeting about darts.

But there it was, a congratulatory tweet to England’s Fallon Sherrock after she became the first woman to beat a man at the PDC World Championship.

King knows all about beating a man – after all, she disposed of Bobby Riggs in straight sets in the Battle of the Sexes in 1973, and has been a fierce advocate for gender equality since campaigning for equal prize money at the US Open in the early 1970s.

But what was most pleasing about Sherrock’s win at Alexandra Palace in December was the crowd roaring her on to an historic victory over Ted Evetts, who was gracious in defeat. It was pure sporting drama. 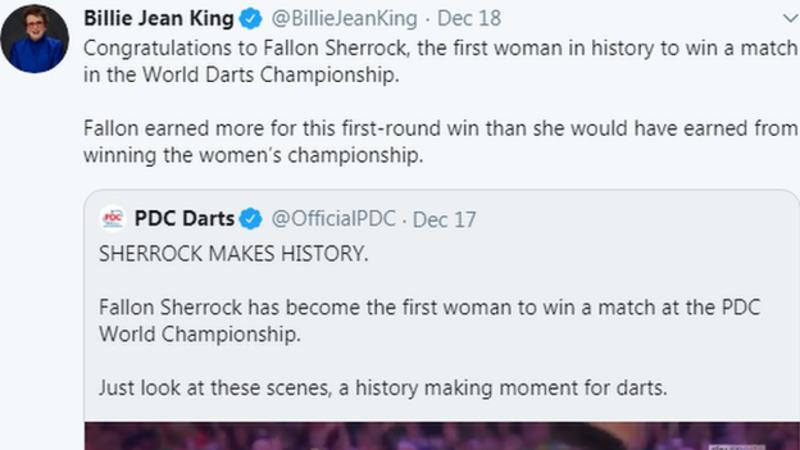 And as 2020 dawns, it got me thinking what a game-changing decade the 2010s have truly been for women’s sport. You no longer feel you have to apologise for being a fan.

It is only in the last decade female England players have been awarded professional contracts in football, rugby union and cricket, allowing them to concentrate on their sports full time. For those pioneers who have gone before, paying for their own kits and travel to elite competitions, there are now genuine career pathways for many sports women.

While England women’s footballers are still looking for that elusive World Cup win, they did win a bronze medal in Canada in 2015 after beating Germany for the first time, which is the best World Cup finish by a male or female team since 1966.

And the fan-base and viewership has grown with them.

Who would have believed a decade ago that 11.7 million people would tune in to the BBC to watch a Women’s World Cup match when England took on the United States in the semi-final of this year’s tournament in France? Or that almost 80,000 would pack Wembley for a friendly against Germany in November?

But the signs were there at the start of the decade that there was an audience for women’s football.

Back in 2011, England had reached the quarter-finals of the World Cup, with their matches shown live on the BBC Red Button.

However, fans were not happy the matches were not on a terrestrial channel and women’s sport charities and MPs put pressure on the BBC to change its mind, which it did – eventually – and the match was broadcast live on BBC Two.

The public profile of the players grew even further when as Team GB, they beat Brazil in front of 70,000 at Wembley, at the London 2012 Olympics.

That summer also saw the likes of Jessica Ennis-Hill, Victoria Pendleton, Katherine Grainger, Nicola Adams, Hannah Cockroft and Ellie Simmonds become household names as they were were rightly lauded for their gold-medal exploits in a home Olympics and Paralympics.

Two years later, snowboarder Jenny Jones made history by becoming the first Briton to win a Winter Olympic medal on snow when she took bronze in slopestyle in Sochi, Russia. A month later, visually impaired skier Kelly Gallagher and her guide Charlotte Evans won a first GB gold medal on snow in the Winter Paralympics.

The decade also saw two World Cups won by women’s teams. England defeated Canada to claim the Rugby World Cup in 2014 and in 2017 Heather Knight led England to victory in the Cricket World Cup at a sold-out Lord’s with a stunning fightback as Anya Shrubsole’s 6-46 saw India bowled out for 219 after being 191-3. A global audience of 180 million watched the tournament.

And sandwiched in between in 2016 was the Rio Olympics. Who could forget the drama and tension as Team GB claimed hockey gold in a nailbiting shootout, with goalkeeper Maddie Hinch the stand-out star?

And so to 2019 where we saw jockey Bryony Frost become the first woman to ride a Grade One winner over jumps at the Cheltenham Festival when she guided Frodon to victory, and the aforementioned Sherrock making darts history.

This all tied in nicely with the BBC’s #ChangetheGame campaign which was launched in 2019 to showcase female athletes.

With live rights to the football and netball World Cups, World Athletics and World Gymnastics Championships, we turned the volume up on women’s sport and altered perceptions – and it worked with more than 45 million people consuming our women’s sport content across television, radio and online this summer.

But before we all pat ourselves on the back for a job well done, there is still a lot of work to be done to maintain the momentum and opportunities into the 2020s.

It goes to show that if sports and governing bodies invest in women, the results are there for all to see. But visibility in the media is key, while levels of sponsorship, pay and prize money need to increase as well. And there needs to be more female coaches, officials and representation on boards.

There have been so many amazing sporting moments over the past 10 years but what I have admired greatly is the amount of sportswomen prepared to use the power of their profiles and platforms to call out injustices and inequality.

Whether that’s Serena Williams on the sexism and racism she has endured, Simone Biles talking openly about the sexual abuse she suffered at the hands of USA Gymnastics team doctor Larry Nassar, Megan Rapinoe and her World Cup-winning colleagues taking on their own federation and demanding equal pay or Allyson Felix highlighting the maternity policy hypocrisy of Nike, they have all been prepared to put their heads above the parapet to improve the future for others.

So I’ll leave the last word to Fifa Women’s Player of the Year Rapinoe on her thoughts about the next decade for women’s sport, after 1.2 billion people tuned in around the globe to watch this summer’s Women’s World Cup.

“We changed the game,” she said. “But is it enough?