The N.F.L. playoffs are one of the biggest sporting obsessions in the United States, typically among the most-watched television programming of the year.

And this year the postseason will get an extra boost because the N.F.L. has added two playoff games, for a total of six games over Saturday and Sunday in what the league is calling “Super Wild Card Weekend.”

Yet the monthlong postseason party — which will include perennial contenders like the New Orleans Saints and the Seattle Seahawks as well as rarer participants like the Buffalo Bills and the Cleveland Browns — will be drained of some of the color, sound and pomp as the league navigates the coronavirus pandemic.

Most games will be played with no or very few fans in the seats, sapping some of the drama — not to mention live crowd noise — from the football festivities. There will be only a few hundred, not thousands of, Terrible Towels waved in Pittsburgh. There won’t be any “12s,” as Seahawks supporters are known, shaking the rafters in Seattle, because spectators will be barred. Just 3,000 Saints fans will be yelling “Who dat?” in the cavernous Superdome.

The Bills, who will kick off the bonanza of games on Saturday afternoon at home against the Indianapolis Colts, needed intervention from Gov. Andrew M. Cuomo of New York and an elaborate testing program to be able to host a few thousand fans for the first time this season.

Viewers at home have become accustomed to seeing stadiums filled with cardboard cutouts and to hearing recorded cheers. But those make a poor substitute during the playoffs, when sold-out stadiums help add excitement for a television audience expanded by a surge in casual viewers.

“Football this time of year is part of Americana, our town squares on Sundays and Saturdays and now even Wednesday,” said Andy Dolich, who ran business operations for four professional teams, including the San Francisco 49ers. “You have all sorts of digital devices and sound being pumped in, but there’s nothing like seeing fans sitting shoulder to shoulder with beer and brats being dumped in their laps.”

The empty seats will hit Browns fans the hardest, Dolich said. After they ended the N.F.L.’s longest playoff drought last Sunday, their fans will not be able to attend the game in Pittsburgh. The Steelers expect to have fewer than 1,000 fans on hand on Sunday, limiting attendance to friends and relatives of players and staff members. 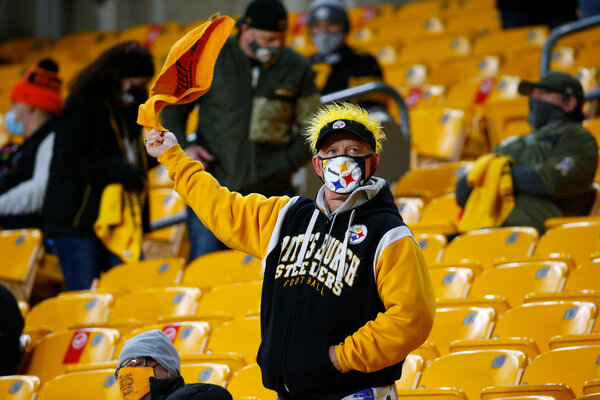 “It’s like Edmund Hillary getting to the top of Everest and not being able to tell anybody,” he said.

The buzz-less stadiums have become one of the defining features of the league’s 2020 campaign, along with hundreds of positive coronavirus tests among players, coaches and staff members that forced games to be rescheduled, including one that was ultimately played on a Wednesday afternoon. Thirteen teams had no fans in attendance this season, and several other teams had fans at just a few games before health authorities banned large gatherings as the number of virus cases spiked this winter.

The league drew a combined 1.2 million fans this year, less than 10 percent of last season’s number. The league’s 32 teams this season lost roughly $4 billion in sales of tickets, luxury boxes, food, parking and sponsorships. Even television viewership, the lifeblood of the league, fell 7 percent during the regular season, the first decline since 2017, when a substantial number of players knelt during the playing of the national anthem to protest racial and social injustice.

The Super Bowl will be muted, too. To limit potential exposure to the virus, the teams will arrive only a day or two before the game. Many of the league’s biggest sponsors, who often host hundreds of their most important clients at the Super Bowl, will not travel to Tampa, Fla., for festivities before the game. The N.F.L. might fill just 20 percent of the seats at Raymond James Stadium, including vaccinated emergency medical workers invited by the league.

Still, some fans will get a chance to see their teams play in person for the first time this season. The Bills will have about 6,000 fans this weekend, and the Packers said they would host about the same number of fans at their first home game, in the divisional round next weekend. The Tennessee Titans will have about 14,500 fans, or 21 percent of their capacity, at their home game; that number is in line with the attendance at many of their regular season games.

In the future, though, when fans look back at pictures of this year’s playoff games, the empty seats are sure to stand out as much as, if not more than, the plays.

“Intellectually, people will say it was remarkable that there were games, but that they were lacking the passion, which is a key element of live sports,” said Phil de Picciotto, the president of Octagon Sports, a talent agency and event management company. “It will feel lacking. But the alternative was to do nothing.”