Kristina Mladenovic was so close to a dominant victory. After it fell apart, she said that the restrictions she faced because of another player’s positive virus test had taken a toll. 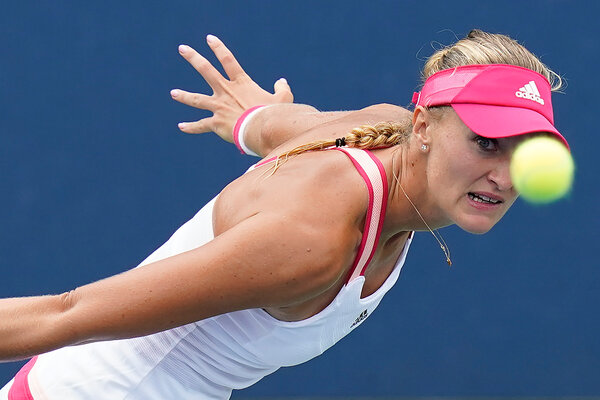 Restricted to her hotel room at the United States Open except for practices and matches, French tennis star Kristina Mladenovic could find no refuge on the court on Wednesday.

She was seemingly in total command of her second-round match against Varvara Gracheva, a 20-year-old from Russia playing in her first Grand Slam singles tournament.

Mladenovic, the No. 30 seed, was tantalizingly close to a dominant victory. She led 6-1, 5-1 and 15-0 on her own serve before Gracheva came back to win the game. In the next, Gracheva fell behind 0-40 but saved four match points to hold serve.

The comeback was underway — although it looked much more like a collapse — as Gracheva went on to win 1-6, 7-6 (2), 6-0 with Mladenovic struggling to keep her composure and her shots in play during the final set.

After winning 11 of the first 13 games in the match, she ended up losing 12 of the last 13, one of the most dramatic turnabouts in U.S. Open history.

“It’s a nightmare what we are experiencing here,” Mladenovic said in French, fighting back tears. “I have only one desire, and that’s to get my freedom back and even that we don’t have yet.”

Mladenovic is one of a group of players who have faced tighter restrictions and more frequent coronavirus testing after tournament health officials determined that they had close contact with Benoit Paire, a French men’s player who tested positive for the coronavirus on Saturday.

Mladenovic, who has repeatedly tested negative for the virus, said she had one practice session with Paire in New York, but what caught the attention of contact tracers was a game of cards she played with Paire and others in the lobby of the main hotel where players are staying on Long Island.

Mladenovic has said the game lasted less than an hour and that she was wearing a mask.

Paire, who was withdrawn from the tournament and restricted to his hotel room, said on social media on Wednesday that he has since tested negative for the virus.