ATLANTA — Players of Asian descent have won eight of the past 10 Women’s P.G.A. Championships, but there is nothing cookie cutter about the winners. They include Shanshan Feng of China, who has worn tailored cow pants to reflect her fun-loving personality, and Sung Hyun Park of South Korea, who had a Korean word on her bag that translated to “I am different.”

More than five dozen Asian Americans and Pacific Islanders are L.P.G.A. members, more than any league or tour in North American professional sports. Several other members have Asian roots, and their convergence on the Atlanta Athletic Club this week for the third major of the season throws into stark relief both their ascendancy and ancestry.

The golf course is roughly 15 minutes from two of the three massage businesses where eight people, six of them Asian women, were fatally shot in March in a crime that encapsulates the escalating violence against Asians in America during the pandemic.

The rise of anti-Asian hatred and bias has jolted the players out of their silence. For years, these women have endured microaggressions about their names, their appearance, even their success. At a time when Asians have been scapegoated in American communities for the spread of the coronavirus, players of Asian descent who show no fear on the golf course have grown uneasy, and outraged, enough that they are speaking out about what it means, and how it feels, to be Asian in the United States right now. 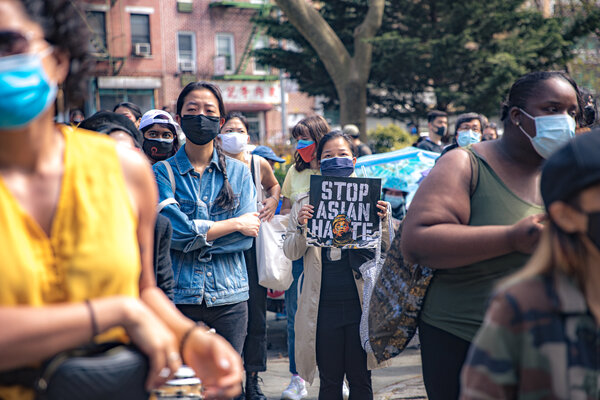 “I’m scared every time I see the news that it could happen to me,” said Yani Tseng, a two-time Women’s P.G.A. champion and the first player from Taiwan to become the world No. 1.

Tseng, 32, was named one of Time’s 100 most influential people in the world in 2012, but in 2021 she feels helpless. Tseng, who said she fell in love with America during her first visit in 2007 because everyone “was so nice,” was incredulous when a friend who lives in Irvine, Calif., relayed a terrifying experience she had while seated in her car in a grocery store parking lot. A group of strangers approached her automobile and attempted to open its locked doors, pounding on the car with so much force the vehicle oscillated. After hearing that, Tseng, who has a residence in San Diego, about a 90-minute drive south of Irvine, said, “I was really worried about myself.”

At home in Taiwan, her family also frets. “Every time they see the news they say, ‘Are you OK there?’” she said.

The nine-time L.P.G.A. tour winner Na Yeon Choi, one of 25 L.P.G.A. members from South Korea, has traveled to events in America in the past accompanied by her mother. But she advised her not to bother coming to the United States for her tournaments this year, even if, or as, travel restrictions are loosened.

“I was thinking it’s not safe for her to be alone when I’m focusing on practice,” Choi said. “She can’t speak English, so she’d be stuck in the hotel because I wouldn’t want her going out.”

According to a national report released by Stop AAPI Hate, 6,603 incidents of anti-Asian violence, harassment and discrimination were reported to the organization in the previous 12 months ending March 31. Verbal harassment (65.2 percent), shunning (18.1 percent) and physical assault (12.6 percent) led the recorded incidents.

After a white male gunman allegedly opened fire at the three Atlanta-area spas, the L.P.G.A. released a statement in support of the A.A.P.I. community and Choi received an internal email, which she said was sent to all the players, advising them to be careful when venturing outside the tour bubble at all tournaments.

In March, Mike Whan, the departing L.P.G.A. commissioner, said there had been isolated incidents involving Asian players away from tournament venues over the years, including some in which the tour’s security detail had to get involved.

The Covid-19 protocols in place during the past year have provided a protective membrane. Players have been prohibited from dining or socializing outside the tournament grounds or their accommodations. And tournaments have had few, if any, spectators. But their environments aren’t airtight, and pandemic protocols are easing, increasing interaction between the players and the public.

The players find themselves distracted by worries about the safety of their loved ones — and of themselves.

Mina Harigae, 31, a four-time California Women’s Amateur champion from Monterey whose parents are Japanese, said: “I’ll be honest. I got so scared I went online and bought a self-defense stick.”

At the year’s first women’s major, which was held outside Palm Springs, Calif., Michelle Wie West said she ran an errand at a strip mall near the course, one of thousands of such pit stops she has made for one forgotten item or another during her nearly two decades of competing in L.P.G.A. events. This time, though, was different.

“It was the first time I was truly afraid,” she said, adding, “We’re a target now, unfortunately.”

Lydia Ko, 24, a Korean-born New Zealander with 16 L.P.G.A. victories, including two majors, acknowledged at the Los Angeles tour stop in April that she worried about her mother traveling on her own in the United States.

Tiffany Joh, a first-generation American, grew up in a nice neighborhood in San Diego. Her South Korean-born parents still live nearby. “It was kind of a sad day when my mom was like, ‘Should we start carrying around pepper spray?’” Joh said.

Joh, 34, is easy to place on the golf course. Just follow the laughter. With one-liners as crisp as her iron shots, she spent two years grinding on what is now the Symetra circuit, where she often stayed with families to save money before she joined the L.P.G.A. Tour in 2011.

At one stop, Joh recalled, her hosts remarked on her height, which is 5 feet 6 inches, and asked: “Are both your parents Oriental? Because you’re quite tall and built for an Oriental.”

“I said, ‘No, I’m not a rug and I’m not a chicken salad, so no, I’m not Oriental,’” Joh said. “And then I was joking around because for me, when I have a sense of discomfort, my defense mechanism is humor. So I said, ‘You know, no one has ever told me my parents are my real parents. Maybe I need to talk to the milkman.’ And they said: ‘Oh, no, sweetie. That would be the soy milk man.’ They were trying to be cute.”

Joh added, “It was kind of an example of how you can educate someone without being a jerk about it.”

A Rise in Anti-Asian Attacks

A torrent of hate and violence against people of Asian descent around the United States began last spring, in the early days of the coronavirus pandemic.