Australia could only manage one run for the second match in a row but it was enough to get a 1-0 win over Italy on Thursday.

A day after being thrashed by Japan, the Spirit prevailed over their lowest-ranked Olympic competition to boost their medal hopes and stay in touch with the top teams. 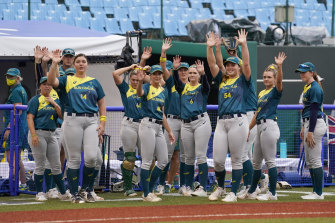 The Australians wave to their opponents after their 1-0 win.Credit:AP

But it was a tense and close finish at Fukushima Azuma Stadium.

The Australians led from the second inning, but the Italians rallied in the seventh and final inning.

Australian pitcher Kaia Parnaby, who looked much more settled after a tough start on Wednesday, got the first two outs of the seventh. But Giulia Longhi smoked a long single past Australian captain Stacey Porter down the third base line to keep the inning alive.

Fabrizia Marrone was brought in as a pinch runner and stole second base before Parnaby walked Laura Vigna to put the go-ahead run on base.

Coach Laing Harrow then went to the bullpen to bring in Ellen Roberts for her first appearance of the Games and she was able to end the threat, with Italian catcher Marta Gasparotto struck out looking.

While Australia looked much more comfortable in the field, their bats failed to fire for the second day straight.

Their lone run was batted in by Jade Wall in the second inning, after Taylah Tsitsikronis smacked a double that bounced off third base and into left field.

Chelsea Forkin struck out swinging before Tarni Stepto advanced Tsitsikronis to third on a ground out. Wall was then able to score her catcher on a single. 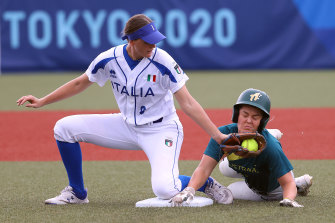 Taylah Tsitsikronis cops a tag to the face as she slides safely into second base.Credit:Getty Images

Leigh Godfrey was caught stealing at second to retire the side in what could have proved a crucial moment, with clean-up hitter Tsitsikronis at the plate in the bottom of the sixth inning. But the Spirit ended up not needing any insurance, holding on despite the traffic on the bases in the seventh.

The Italians also threatened to tie the game in the sixth inning, when Giulia Koutsoyanopulos reached first on a slow-developing infield hit. But she never got further than second base as the Aussies kept their cool to retire the next three batters.

Australia made just one change to the team that lost to Japan on Wednesday – Leah Parry came in for Stacey McManus at second base. Porter had attributed the loss to first-game nerves and said a win against Italy would help get Australia back on track.

Italy were beaten by the US on Wednesday but did well to hold them to just two runs.

Japan and the US stayed undefeated on Wednesday, with the host nation beating Mexico 3-2 and the Americans beating Canada 1-0.

There are no softball games on Friday, but Australia will resume on Saturday against Canada at 11am AEST.

Never miss a medal or great sporting moment with our Olympic update emailed daily. Sign up for our Sport newsletter here.