When guests gather after Friday’s State Memorial Service for former Prime Minister Bob Hawke and relate their favourite stories, there is one which has never previously appeared in print.

It demonstrates there was nothing fake about Hawke’s essential “Australian-ness” – his larrikinism,
extreme competitiveness and colourful language – all there to be seen in Bali in June, 1997, six years
after he had surrendered the nation’s top job. 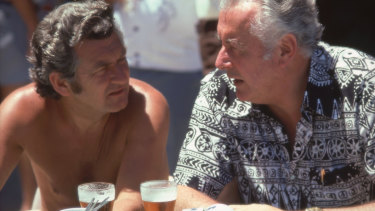 Legendary: Bob Hawke, seen here having a beer poolside with Gough Whitlam in the 1970s.Credit:Russell McPhedran

The world’s ironmen and women were competing at Legian Beach and Hawke was present at the
behest of Sydney businessman and publisher Kevin Weldon, the inaugural president of the
International Life Saving Federation.

I was covering the event Bali Oceanman – the old ironman circuit with an extra leg, the ocean kayak
– for the Herald.

When the athletes headed out to sea on a glorious sunsplashed day, Hawke, Weldon and myself
settled in for an afternoon drinking beer by the hotel pool.

“I wish I had a camera crew there,” recalls Weldon. “It was a unique afternoon.”

Conversation ranged from literature (Hawke was a fan of my mother Olga’s books), football (Hawke
was an Aussie rules man but believed rugby league stood up better as a spectacle in the wet),
longevity (“my greatest gift is my parent’s genes”) and, of course, politics.

The athletes returned late in the afternoon and challenged us to a sculling competition, where Dean
Mercer, Phil Clayton and Dwayne Thuys – young, fit athletes, tongues soaked in salt – lined up against three old men who had been consuming all afternoon.

“They only just pipped us and they were fresh off the top,” Weldon recalls. Hawke insisted Thuys
had not followed the rule of placing an empty glass on his head. Beer could be seen running down
his cheeks, prompting Hawke to say, “You bum. You cheated.”

He demanded a re-race, which was agreed by judge Kane Heussner, who had framed a market.
Hawke was incensed at his 7/1 price, growling, “I’m better than that.”

So we did it all again, Hawke, never once considering his two bloated team members.

However, Weldon is forever indebted to Hawke, who he says gave the ILSF instant credibility.

“In one day, he got Nelson Mandela, (Brian) Mulroney of Canada, (Charles) Haughey of Ireland and
(John) Major of the UK to join him as co-patrons,” Weldon said. "It now has 163 member countries,
with 53 million members.”

Furthermore, Hawke’s presence helped deliver peace in the bitter ironman-breakfast cereal war
which was being fought at the time of the Bali Oceanman event. 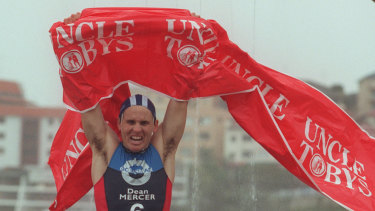 Dean Mercer, shown here in 1997, was part of the ‘Cereal Wars’.Credit:Adam Pretty

With the Mercer brothers (Darren and Dean) in the Kellogg's camp, Trevor Hendy contracted
to Uncle Tobys and a few ironmen signed to International Management Group, it seemed the sport
in Australia was fractured for all time.

But the Bali event, run over the Australian winter and therefore not conflicting with existing
obligations, provided the catalyst for peace, with Weldon saying, “So many of the Oceanmen came
up to me afterwards and said how grateful they were for meeting such as great man.”

Hawke’s diplomatic skills, however, were not as polished in the evening following the beer sculling.

The owner of the Kartika Plaza invited us to dinner with a group of visiting German industrialists.
It wasn’t long before Hawke berated them for the Holocaust.

As Weldon recalls, “He didn’t let up, asking how the German people could not have known what was going on. He put out dates, the names of villages, even the time of day the Nazis came to take the Jewish people to the concentration camps. The German hosts had no answers.”

The Italian cook had earlier been invited to the table for us to do the customary gush over the quality of the food.

He had been quietly giggling at the Germans’ embarrassment but Hawke turned on him, too,
mentioning Italian “heroics” in World War II.

I recall resurrecting the old David Frost joke about Italian tanks (one forward gear and four reverse
gears, the forward gear to be used if the enemy attacks from the rear).

It offered only a brief respite before a hotel attendant informed Hawke a car was waiting to take him to the airport. He hadn’t packed.

But he made it, as he always did, with a little help from his friends.