Brazil striker Cristiane became the oldest person to score a hat-trick in World Cup history as her treble handed debutants Jamaica a 3-0 loss.

But they got their Group C campaign off to a flying start as Cristiane headed the first before tapping home a second.

And a fine free-kick gave the 34-year-old the first hat-trick at France 2019.

Cristiane, who plays her club football in her home country for Sao Paulo, is the oldest player to score a World Cup hat-trick in either the men’s and women’s game.

Aged 34 years and 25 days, she beat the record held by Cristiano Ronaldo, who was 33 years and 130 days old when he scored a hat-trick in Portugal’s 3-3 draw with Spain at the men’s World Cup in Russia in June 2018.

In front of a 17,000 crowd at the Stade des Alpes, Brazil could even afford to miss a penalty, Jamaica’s 19-year-old keeper Sydney Schneider saving Andressa Alves’ weak attempt when the score was 1-0.

It was awarded after Allyson Swaby handled inside her own area.

The win lifted Brazil to the top of group, level on points with Italy, who came from behind to beat Australia 2-1 earlier in the day.

Brazil, who had lost their previous nine games, would have won by a bigger margin but for Schneider.

The Jamaica keeper twice denied Debinha when the Brazilian forward was through on goal.

Jamaica’s most dangerous player was Khadija Shaw who was denied a first-half equaliser by a fine one-handed save from Barbara.

Brazil’s side included Formiga, the midfielder becoming the first player to appear at seven Women’s World Cup finals, and the oldest player in the tournament’s history at 41 years and 98 days. 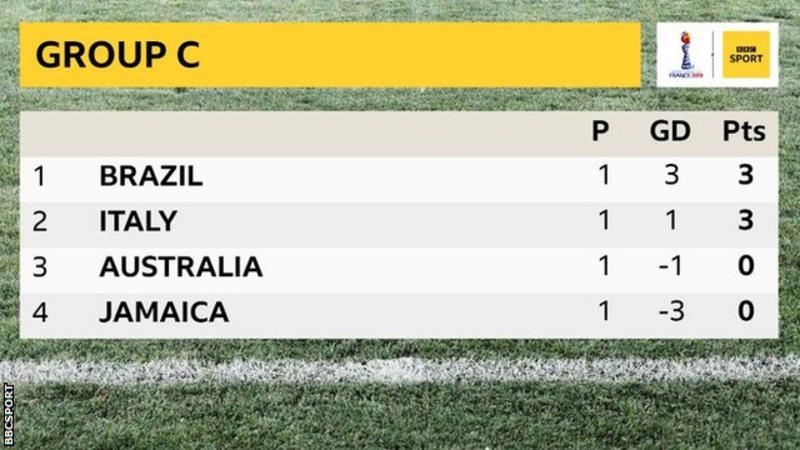 Brazil head for Montpellier where they face Australia on Thursday (17:00 BST) while Jamaica’s second Group C game is in Reims on Friday against Italy (17:00).

Attempt missed. Debinha (Brazil) right footed shot from outside the box is close, but misses to the right. Assisted by Geyse.

Sydney Schneider (Jamaica) wins a free kick in the defensive half.

Attempt missed. Ludmila (Brazil) right footed shot from the centre of the box is close, but misses to the right.

Attempt missed. Deneisha Blackwood (Jamaica) left footed shot from outside the box is high and wide to the left following a set piece situation.

Attempt missed. Dominique Bond-Flasza (Jamaica) right footed shot from outside the box misses to the left from a direct free kick.

Daiane (Brazil) is shown the yellow card for a bad foul.

Khadija Shaw (Jamaica) wins a free kick in the attacking half.

Tiffany Cameron (Jamaica) wins a free kick in the defensive half.

Attempt missed. Ludmila (Brazil) right footed shot from the centre of the box is close, but misses to the right. Assisted by Geyse.

Attempt missed. Thaisa (Brazil) right footed shot from outside the box is too high following a corner.

Attempt blocked. Mônica (Brazil) header from the centre of the box is blocked. Assisted by Andressa Alves with a cross.

Attempt saved. Geyse (Brazil) left footed shot from the centre of the box is saved in the bottom right corner. Assisted by Ludmila.

Chinyelu Asher (Jamaica) wins a free kick in the defensive half.

Delay over. They are ready to continue.

Goal! Brazil 3, Jamaica 0. Cristiane (Brazil) from a free kick with a left footed shot to the top right corner.

Cristiane (Brazil) wins a free kick in the attacking half.

Offside, Brazil. Tamires tries a through ball, but Cristiane is caught offside.