Aaron Judge and Giancarlo Stanton also homered — the Yankees are 9-0 when they go deep in the same game, including the playoffs. The Yankees stopped a four-game skid at Camden Yards and at 10-13 moved into a tie with the Orioles for last in the A.L. East.

“Corey set the tone,” Yankees Manager Aaron Boone said. “Obviously, he threw the ball really well and was in command most of the night. I thought our offense did a lot of really good things. We still didn’t breakthrough with a lot of runs, but we’ll certainly take five.”

Kluber (1-2), who signed an $11 million, one-year contract as a free agent, allowed one run and six hits with five strikeouts over six and two-thirds innings. Kluber has come back from two injury-marred seasons and became the first Yankees starter other than Gerrit Cole to pitch into the seventh inning this season. It was Kluber’s first win and longest outing since he threw seven innings against Atlanta on April 20, 2019.

“Obviously getting the win was the most important thing, but it was good to finally go out there and string together a good outing,” Kluber said. “Any win you can get is a special one.”

The Yankees had 12 hits, and for the first time this year the Nos. 1-3 hitters in the Yankees batting order had multiple hits.

D.J. LeMahieu doubled leading off and scored on a flyout by Gio Urshela; the Yankees had been the only major league team without a sacrifice fly this season.

Judge hit his fifth homer in the third, and the Yankees made it 4-0 in the fourth on a home run by Higashioka and an R.B.I. single by Urshela that ended the night for rookie Bruce Zimmermann (1-3), who gave up nine hits in three and two-thirds innings.

“I just though he left some balls out over the plate,” Orioles Manager Brandon Hyde said. “It wasn’t the best night for him..”

“I don’t concern myself too much with who is going to play when,” Higashioka said. “If I’m playing my best baseball, more than likely, I’ll end up finding more playing time at some point. My main focus is going out there and playing my best every time.”

The Yankees acquired Wandy Peralta, a left-handed pitcher, from the San Francisco Giants for outfielder Mike Tauchman. Tauchman, who the Yankees acquired from Colorado in a 2019 trade, hit .266 with 13 home runs in 141 games for the team. Peralta, 29, has a 4.72 E.R.A. in 220 career appearances, all of which have come out of the bullpen.

Richards Finds His Form Against Mets 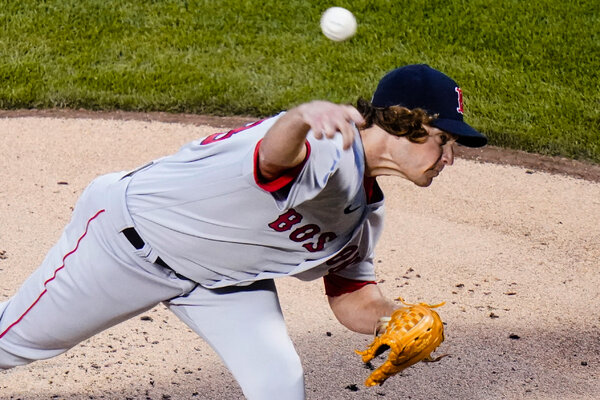 Garrett Richards reworked his delivery last weekend with one thought in mind.

“More north and south,” he said.

The Red Sox right-hander is going in the right direction now.

Richards finally found the strike zone and punched out 10, Bobby Dalbec hit his first homer of the season and Boston beat the Mets, 2-1, Tuesday night.

Richards (1-2) allowed a run and seven hits over seven innings, issuing no free passes one start after walking six. He trimmed his E.R.A. from 6.48 to 4.94 thanks to a tip from pitching coach Dave Bush, who suggested he ditch his full windup to eliminate side-to-side movement.

“It’s super simple as far as my delivery goes,” the 32-year-old Richards said. “And it helps me stay in the zone.”

Boston improved to an A.L. East-leading 15-9, including a major league-most 12 comeback victories.

Jeff McNeil put the Mets up by 1-0 with a homer in the second, but Dalbec tied it with a shot to right-center leading off the third. Rafael Devers put Boston ahead with an R.B.I. single in the sixth, scoring Enrique Hernandez after his leadoff double.

Matt Barnes fanned Pete Alonso and J.D. Davis during a 1-2-3 ninth for his fifth save. Alonso struck out four times.

Barnes quick-pitched Alonso for strike two, apparently upsetting the slugger. Alonso stared down Boston’s closer after fouling off the pitch, then failed to check his swing on a breaking ball for strike three.

David Peterson (1-3) permitted two runs in six innings for the Mets. The left-hander induced 12 groundouts and struck out three while giving up four hits and two walks.

“He had three pitches going on for him today and his command was solid,” Mets Manager Luis Rojas said.