De Minaur, 21, broke his Russian opponent twice to take the opening set but went off the boil in the second, winning just five points on his first serve. 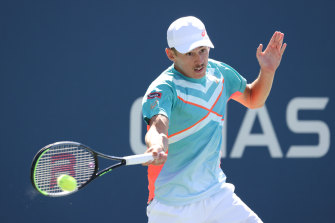 Australia’s Alex de Minaur returns a shot during his third-round match against Russia’s Karen Khachanov at the US Open.Credit:Getty Images

Khachanov extended his advantage by winning the third set before De Minaur suddenly found a second wind to take a 3-0 lead in the fourth, pulling away to seal victory in just over three hours on Court five.

De Minaur has reached the last-16 at Flushing Meadows for the second consecutive year and will meet Vasek Pospisil, who overcame Spain's Roberto Bautista Agut.

Pospisil, who eliminated fellow Canadian and 25th seed Milos Raonic in the second round, has already spent nearly 10 hours on court at Flushing Meadows and advanced in emphatic fashion after smashing 71 winners and 19 aces.

Pospisil lost his focus after taking the opening set with a late break, as he allowed Bautista Agut back into the contest, but got a new lease of life after a medical time-out in the fourth set and roared to victory.

A sure-footed Stephens pounced early as third seed Williams struggled with her first serve and committed 13 unforced errors in the first set, claiming an early break for a 2-1 lead. 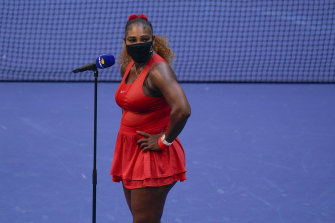 Serena Williams answers questions during an interview after defeating Sloane Stephens at the third round of the US Open.Credit:AP

Williams, who next faces Greek Maria Sakkari, played the match in front of her daughter, three-year-old Olympia, and said she hoped "that she saw her momma fighting".