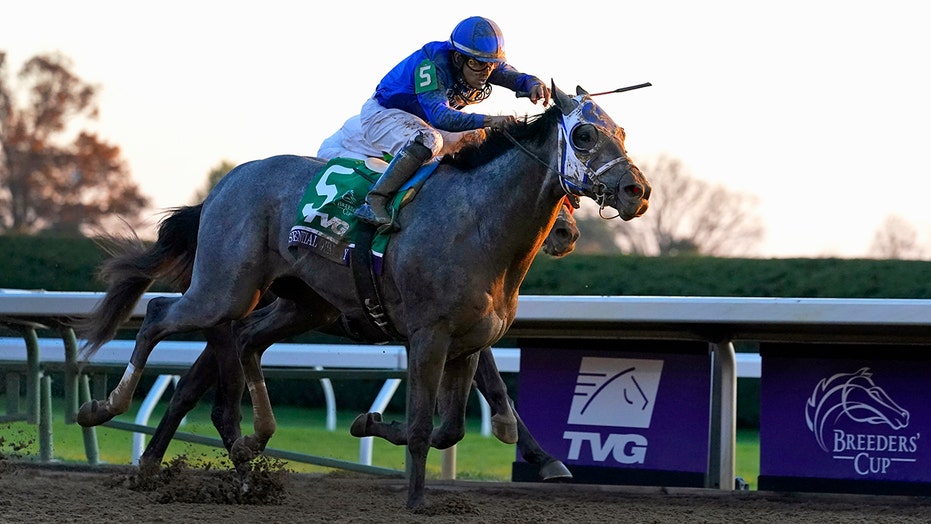 Horse racing could be in line for another Triple Crown bid and this time the likely candidate is an undefeated horse from a barn other than Bob Baffert’s.

Baffert, of course, is the sport’s dominant trainer who guided American Pharoah in 2015 and Justify in 2018 to sweeps of the Kentucky Derby, Preakness and Belmont.

Essential Quality brings the most impressive resume into the 1 1/4-mile Derby on Saturday. No surprise, then, that he’s the early 2-1 favorite in a full field of 20 horses.

“To me, it’s Essential Quality’s race,” said the six-time Derby winner, who will attempt to win a record-breaking seventh with a rare long shot, 15-1 Medina Spirit.

That’s the case, in part, because Baffert’s top two candidates — Life Is Good and Concert Tour — were derailed by injury and a dull effort in a final prep, respectively.

Essential Quality certainly has all the credentials most observers would want in a Triple Crown contender.

The gray colt comes into the Derby undefeated in five career races over four different tracks. He was last year’s 2-year-old champion and winner of the Breeders’ Cup Juvenile. He showed toughness in his final prep in the Blue Grass Stakes, winning by a neck over Derby foe Highly Motivated after a stretch duel.

“He’s a solid, solid horse, hasn’t missed a beat,” trainer Brad Cox said. “He’s a very classy horse. He knows when to turn it on and off.”

Jockey Luis Saez agreed, saying, “I know at the top of the stretch he’s always going to give me that kick.”

Essential Quality breaks from post 14, which has produced just two Derby winners, the last being Carry Back in 1961.

The colt has proven adaptable in his races. He can sit off a fast pace and make a charge. If the pace is moderate, he can run closer and finish strongly.

“With his tactical speed, he hopefully would get a good trip and sit pretty close, and if he fires his best shot, I think that’s good enough,” said Larry Collmus, who announces the Derby for NBC.

Saez adds, “He always wants to win. He knows where the wire is.”

Cox is making his Derby debut at 41, trying to become the first Louisville-born trainer to win the race. He grew up blocks away from the Churchill Downs stable gate.

Essential Quality knows the track well, too. He earned his first victory over the same dirt surface on last year’s Derby Day undercard when no spectators were on hand. On Saturday, there will be about 45,000 fans.

“I do feel like we have a little bit of a homecourt advantage,” Cox said. “With a 20-horse field, you have to overcome some things and have what you call racing luck. If he gets the racing luck and a clean trip, we should be in a great position.”

Essential Quality is regally owned and bred — by Dubai Sheikh Mohammed al Maktoum’s Godolphin stable — and his father is Tapit, who had a modest racing career only to become America’s most dominant sire over the last 16 years.

“He is quite versatile and obviously athletic, and with a very good mind,” said Jimmy Bell, who runs Godolphin’s U.S. operations. “When you put all those together, it can occasionally give you these kind of results.”

A victory by Essential Quality on Saturday at Churchill Downs would bring extra scrutiny of human rights issues involving the sheikh, who won’t be among the limited fans in attendance.

The Kentucky Horse Racing Commission received a complaint this week from a group of human rights attorneys and students at the University of Louisville seeking to have Sheikh Mohammed banned from the Derby over alleged human rights abuses. A judge in England ruled that he orchestrated the abductions of two of his adult daughters.

Thirty horses have gone into the Derby undefeated and nine have emerged with their record unscathed, the last being Justify.

The other undefeated horses in Saturday’s race are 5-1 Rock Your World and 50-1 Helium, both 3-0.

Celebrities
Fox News Flash top headlines for May 15 Fox News Flash top headlines are here. Check out what's clicking on...
Lifestyle
HOUSTON (AP) — A Texas man free on bond from a murder charge was returned to custody Monday after neighbors...
TV & Movies
James Martin’s Saturday Morning: Guest says she’s ‘still here’When you subscribe we will use the information you provide to send...
World News
More On: missing persons Court declares missing billionaire dead after 3 years Self-described ‘witch’ charged with murder in missing mom’s...
Beauty
Amazon deals is chock-full of deep discounts and markdowns on our favorite brands so you can find the best Amazon Mother's Day...
Fashion
Sponsored content. Us Weekly receives compensation for this article as well as for purchases made when you click on a...
Recent Posts