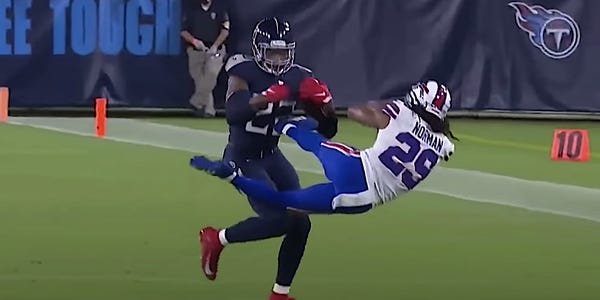 During the second quarter of Tuesday's game, which was moved to Tuesday after a second week of positive COVID-19 tests on the Titans, Henry ran the ball to the outside where he was met by Norman. As Norman went to tackle Henry, the 247-pound running back tossed the 200-pound Norman with a stiff arm.

Norman didn't just get sent out of the way — he went airborn, his body going parallel to the ground. It appeared as if Norman attempted to kick the ball out of Henry's hands, but was unsuccessful. Henry ran out of bounds for the first down, though the play got called back because of a penalty.

The image of Norman going horizontal in the air instantly became a meme.

Some also joked that Norman should ignore social media for a while.

After the game, Henry was asked about the stiff-arm and joked with reporters that he worked out his biceps too much in the offseason.

Henry finished the game with 57 rushing yards and 2 touchdowns on 19 carries.

Celebrities
Neil deGrasse Tyson made science cool for a whole generation of students. He began his career as an astrophysicist (casual, right?)...
Lifestyle
Donald Trump is not happy, to say the least, about the final debate moderator Kristen Welker, and it seems to...
TV & Movies
Hollyoaks is currently celebrating its 25th anniversary in an explosive fashion, and tonight’s episode (October 21) — aka the actual...
World News
CANDACE Owens claimed Democrats are trying to "tax black millionaires into poverty." The conservative political commentator's comment came after rapper...
Beauty
42 New Hair Products Launching This Fall That Will Transform Your Hair Makeup isn't the only category in beauty launching...
Fashion
Us Weekly has affiliate partnerships so we may receive compensation for some links to products and services.Please note: Information below...
Recent Posts
We and our partners use cookies on this site to improve our service, perform analytics, personalize advertising, measure advertising performance, and remember website preferences.Ok