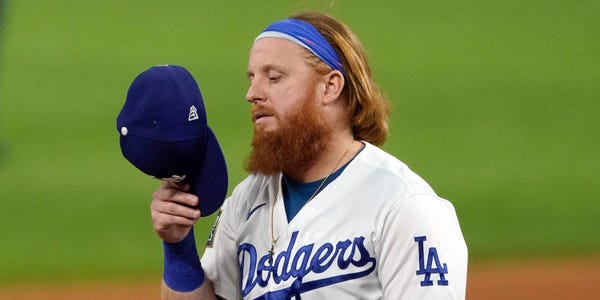 After the Los Angeles Dodgers won the World Series over the Tampa Bay Rays, it was revealed that Dodgers third baseman Justin Turner had been pulled from the game because he had tested positive for COVID-19.

Turner was pulled in the eighth without explanation. In a bizarre twist, the Dodgers' championship celebration — for which Turner wasn't present — was interrupted by the Fox news desk reporting that Turner had tested positive.

ESPN's Jeff Passan reported after the game that Turner's test on Monday was inconclusive. The tests from Tuesday did not reach the testing lab until Game 6, and when it came back positive, Turner was pulled.

According to Passan, the Dodgers will all get tested again upon returning to their hotel.

Turner tweeted after the game that he was feeling well and not showing symptoms.

Of course, Turner had spent the game in the dugout with the rest of the Dodgers, who then all celebrated on the field together. Questions about MLB's protocols are sure to come.

"Obviously, we're concerned when any of our players test positive," Manfred said. "We learned during the game that Justin was positive. He immediately was isolated to prevent spread."