IF only we could all experience the sort of crises Harry Kane suffers.

On the eve of this match, the England captain had admitted to feeling physical and mental fatigue after a summer which ended in the crushing disappointment of a Euros final defeat and a botched transfer attempt. 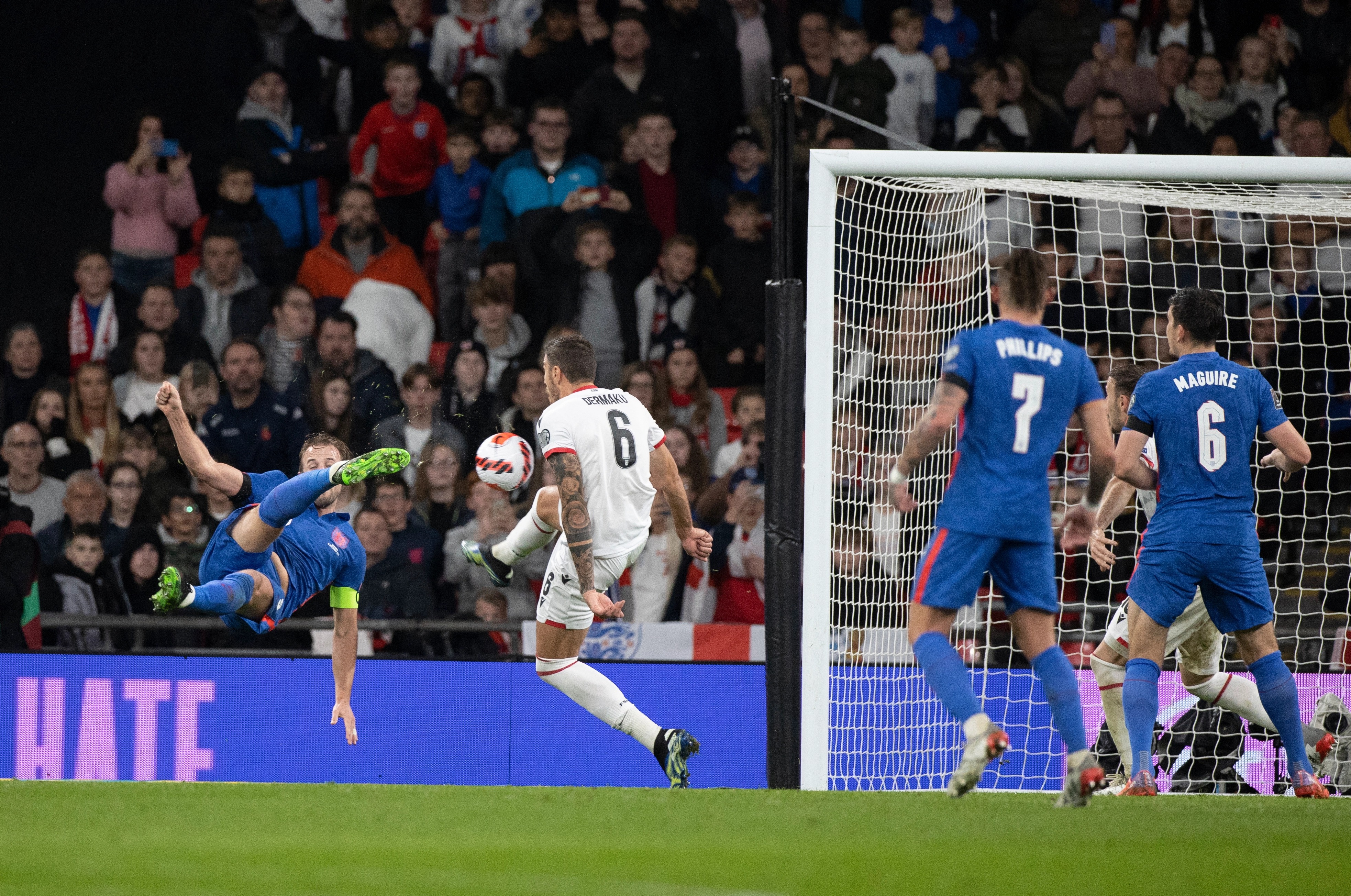 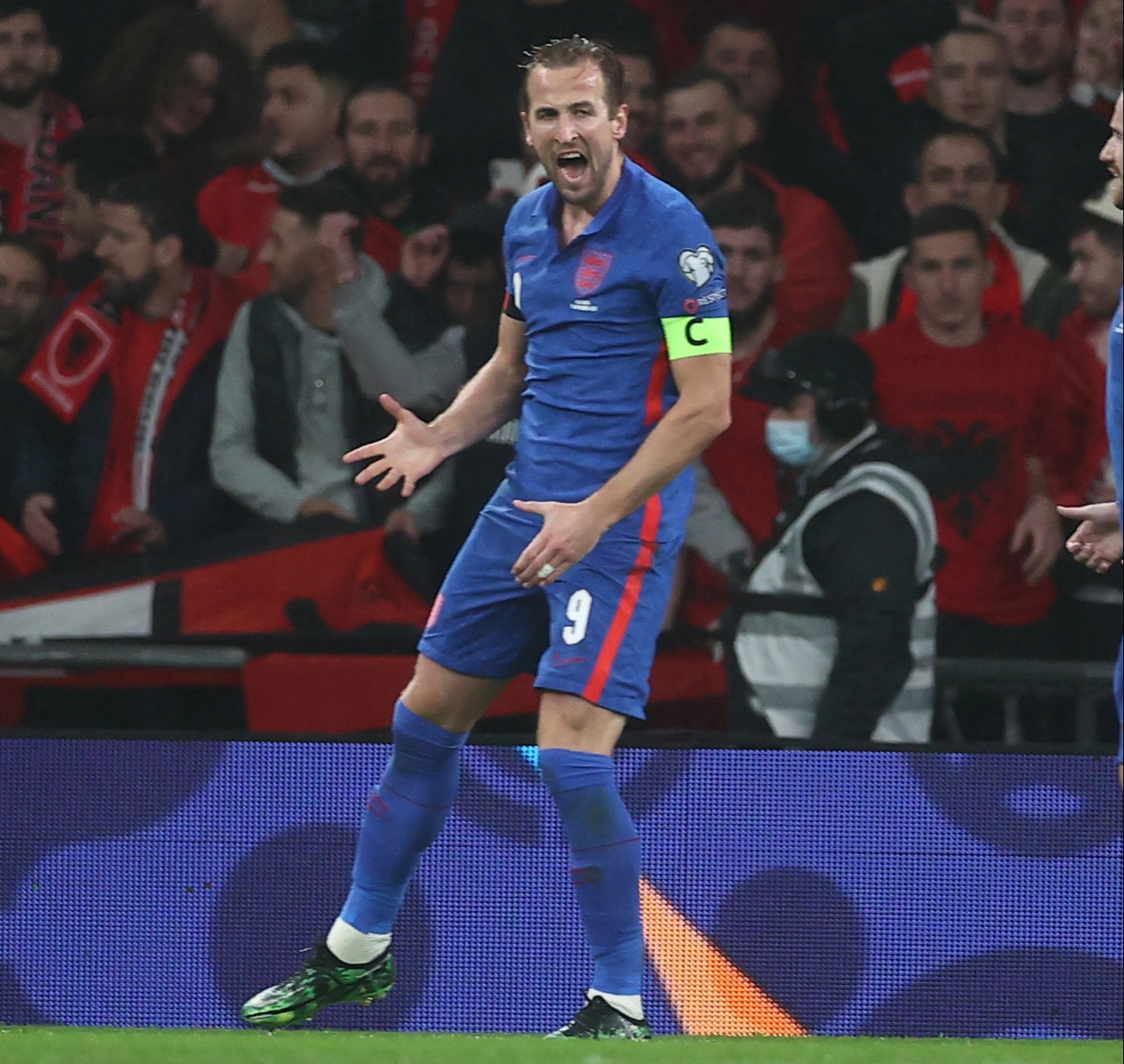 So here he was then – shot of confidence, a busted flush, a shadow of his former self – crashing home a perfect hat-trick in the space of 27 minutes to guarantee, beyond reasonable doubt, that England will qualify for the World Cup finals.

If only Gareth Southgate would let him start against San Marino and Andorra, the Spurs striker would have beaten Rooney’s all-time Three Lions record of 53 before now.

There was a header, then a gorgeous left-foot finish and a thunderous right-foot scissor kick to ensure that England were home and thoroughly hosed by half-time.

He scores all types of goal, this fella, but that third was surely his most spectacular for England – and one which the recently-departed Greaves would have richly appreciated.

Kane has actually scored 13 goals for club and country this season – again, some crisis.

Only one of those has come in the Premier League – so all that talk of a dip in form was not entirely fanciful.

But if Antonio Conte could only stick a Three Lions badge over Kane’s Tottenham cockerel, he might get his new Spurs team firing again.

All the Italian has done so far is ban ketchup from the Spurs canteen – but suddenly Kane is mustard once more.

This was an extraordinary first-half performance from England – especially given that Albania are no mugs and have defeated Hungary home and away in this qualifying campaign.

Here, a seemingly defensive line-up proved to be anything but as England decimated Albania with a ferocious and fearless display.

His favoured back five was back, the in-form Chelsea duo of Reece James and Ben Chilwell as rampaging wing-backs, and Jordan Henderson outstanding alongside Kalvin Phillips – the Liverpool skipper providing a classy assist and a dreamy goal himself.

And Kane was not the only apparently misfiring Premier League star to enjoy a spot of rehab at Southgate’s England getaway spa – Harry Maguire, struggling horribly for Manchester United, got the party started with a thumping early header.

Wembley was an 80,366 sell-out, the child-heavy crowd was a shrill assault on the eardrums and before kick-off, they were all filming each other on their telephones, belting out Sweet Caroline, and pretending it was summer all over again.

With a sizeable contingent of Albanians, there was a serious din around the place – and the match began at thrash-metal tempo.

Sterling scampered forward, received a forearm smash from Marash Kumbulla on the edge of the area, only for ref Nicola Rizzoli to Mr Magoo it.

Albania broke and Jordan Pickford dashed out of his box to clatter Myrto Uzuni before one of those dangerously late offside flags. 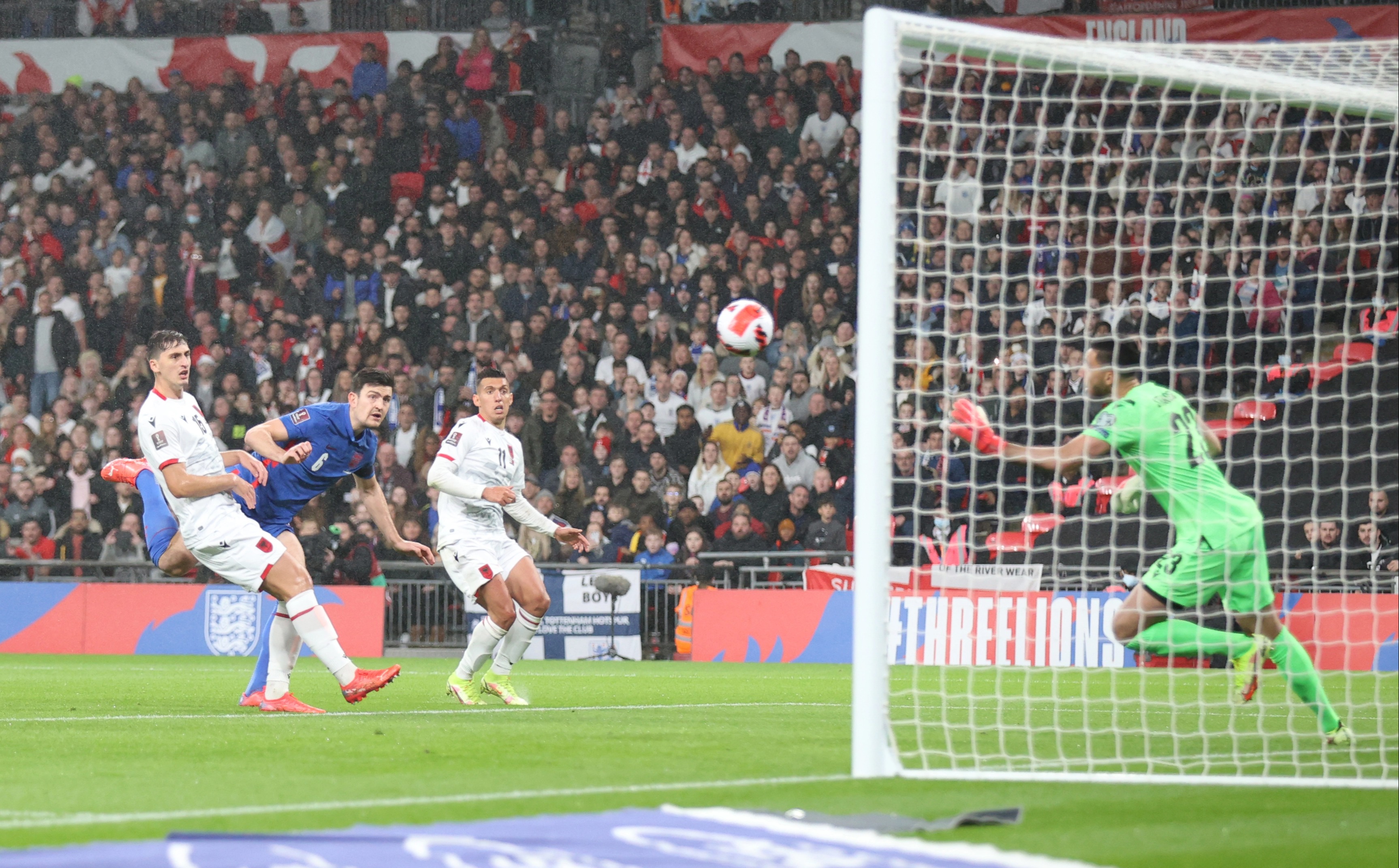 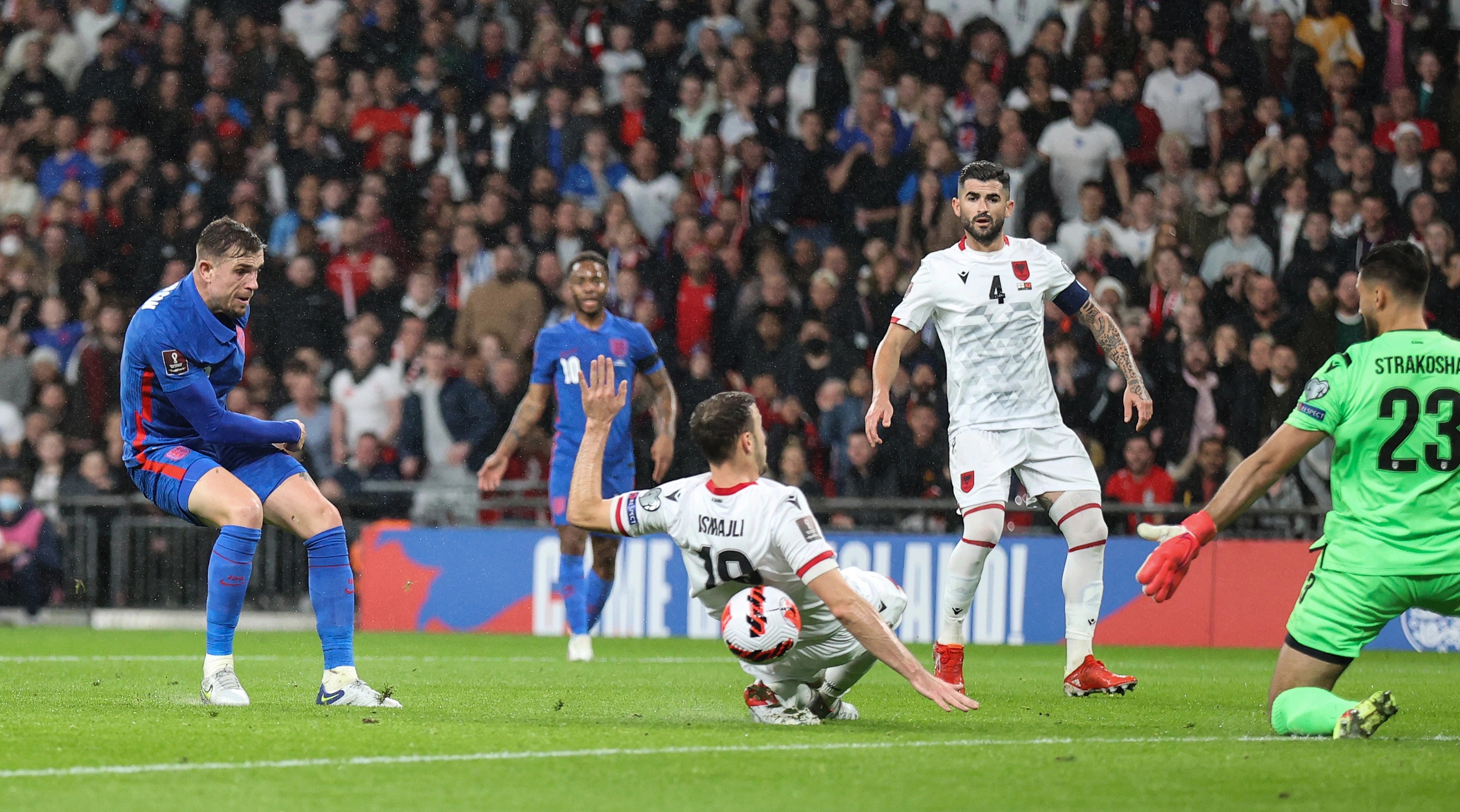 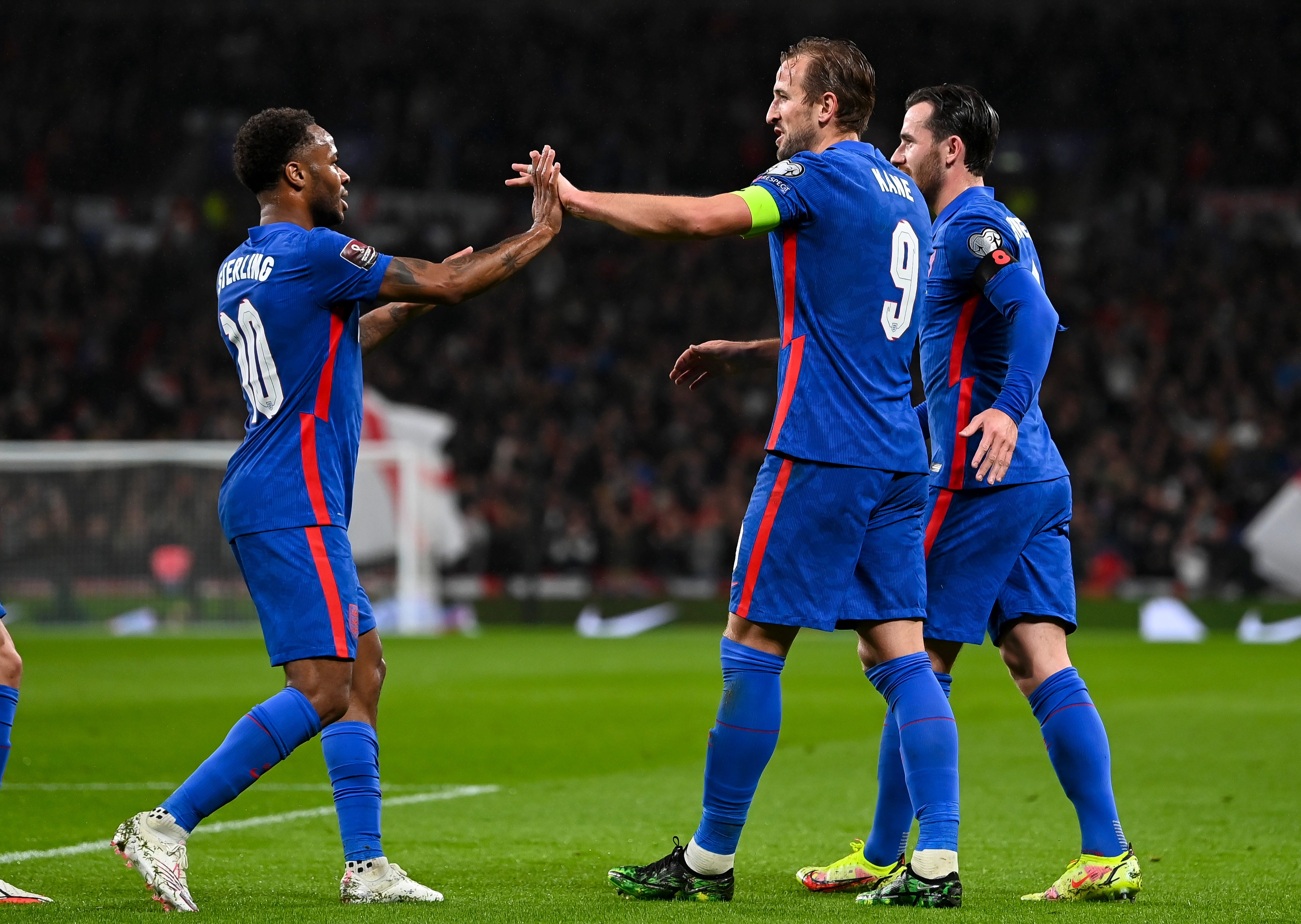 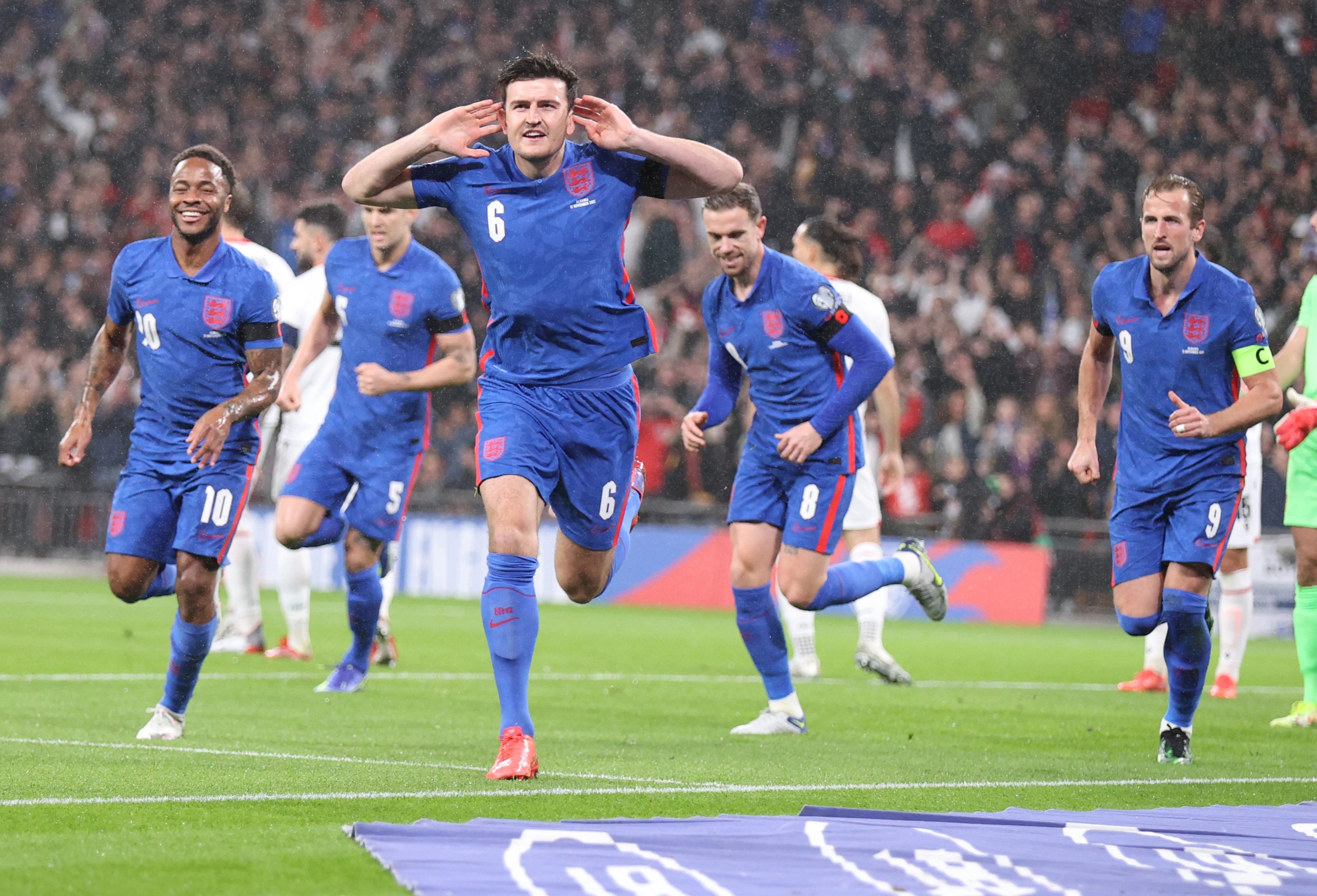 As the violence continued, Kane was poleaxed by Klaus Gjasula, who was booked.

And when James swung in a free-kick from the right, there was Maguire at the back stick thudding in one of those headers with that famously big nut of his.

It was the United captain’s fifth England goal in a year – some record for a centre-half, especially one being berated at club level.

England almost surrendered their lead when Kyle Walker produced a bizarre, comatose back-pass which sent Myrto Uzuni clean through – forcing Pickford to execute an excellent save.

There, though, the alarms ended. England’s second, and Kane’s first, was all about Henderson – a give-and-go with Phil Foden, a cute swivel and a chipped centre which put on a plate for the Tottenham striker to nod over the line.

Then Henderson decided to snaffle one for himself, exchanging passes with Kane, weaving past two defenders and cutting his shot back across the keeper – not a million miles from the goal Ricky Villa scored here 40 years ago.

Then an extraordinary spell in which Kane had six efforts on goal in 12 minutes – scoring twice.

WALK IN THE PARK

Kane had a shot blocked, then saw a bending 20-yarder tipped wide by Thomas Strakosha before his second arrived on 33 minutes.

Sterling slipped him a pass and Kane teased his man, then drilled a shot inside the far post.

Then he dragged a shot across goal and sent a diving header wide before his masterpiece third in first-half injury-time.

Phil Foden delivered a corner to the far post, where Kane leapt – defying gravity, reason and the Albanian defence – to wallop home that scissors-kick.

Southgate withdrew Kane on 63 minutes, perhaps planning to unleash him on poor old San Marino on Monday night, as England seek one final point against the world’s worst team to rubber-stamp qualification for Qatar.

There was one horrible moment when, as Qasim Laci attempted an overhead kick, James and John Stones cracked heads in sickening fashion – both somehow able to continue.

But other than that, this was a walk in the park and a stroll towards the desert next winter.

Kane will be fancying back-to-back World Cup Golden Boots at this rate – and nobody will relish facing Southgate’s England.