Mikki Austin cannot wait to integrate Felisitus Kwangwa’s flair into Surrey Storm’s work, after the director of netball completed her 2021 Vitality Netball Superleague squad with the signing of the Zimbabwe Gems’ captain.

The defender will be arriving in England shortly and after undergoing the necessary COVID-19 protocols, she will link up with her new squad and begin training at Surrey Sports Park.

Last year, Kwangwa was an integral part of Zimbabwe’s first Netball World Cup campaign and she caught the eye of her new director of netball and head coach with her performances.

“I think that anyone who sat and watched the Netball World Cup will remember Felisitus, if not by name then they’ll know her by her work,” Austin said to Sky Sports.

“She was one of the most exciting defenders there, and quite frankly she set the tournament alight.

“Felisitus played against some really tough opposition, for example Australia, and in some tight games. I think that Zimbabwe’s match against Northern Ireland was probably one of the best of the tournament and she really stood up for the Gems.

“Statistically Felisitus hit all of the high notes when it came to deflections, interceptions and centre pass takes, and she did that without making it through to the final, so essentially playing fewer games than others.”

Austin had a wait in order to give Kwangwa a contract with Surrey Storm, due to the Gems’ position in the INF rankings.

The visa regulations state only players from the top 12 teams in the International Netball Federation rankings are able to be signed to franchises in the Vitality Netball Superleague.

“It was unfortunate for both sides that it didn’t materialise then [directly after the World Cup]. I know that Felisitus was gutted at the time because an opportunity like this can be so life-changing and make such a difference to a player’s national team too.

“However, we stayed in contact and I always kept her in mind. This year, when the Gems moved up to 12th in the INF rankings and she became eligible, it was all systems go from our side to sign her.”

As we have seen with other franchises, once a relationship is formed with an emerging national side it can develop into a pathway. For example, Loughborough Lightning’s first signing Peace Proscovia and then Mary Cholhok or Manchester Thunder having both Joyce Mvula and Lauren Ngwira in their squad.

Austin acknowledges it is a possibility for Storm but right now, she’s solely focused on ensuring her new signing arrives in England safely.

“Felisitus earned her spot in the Vitality Netball Superleague at the Netball World Cup and if more players continue to shine across other nations, I’m sure head coaches like myself will have no problem in asking them to be part of their team,” she said.

“Who knows, this could be the start of something really special for Zimbabwe Netball as a nation. I’m certain that it’s something special for Felisitus herself. 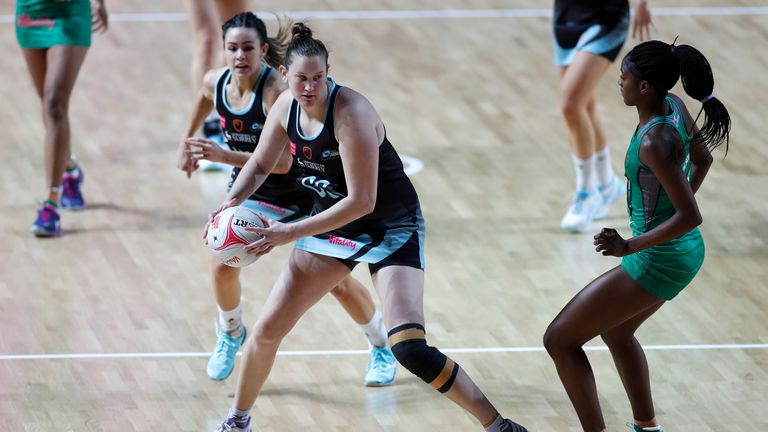 The Vitality Netball Superleague is due to start again in February and with players being classified as elite athletes, they are able to continue to train and work towards returning to court despite the current COVID-19 restrictions in England.

“We’re so excited to get Felisitus in and she’s so excited to get here,” Austin added. “We can’t wait to have her here, for her to be able to meet everyone in person and to start developing those relationships before preparing for the season. “

Tamsin Greenway, who worked alongside Austin for Sky Sports at the Netball World Cup, is thrilled Surrey Storm have signed Kwangwa.

“I was so happy and excited when I saw Felisitus named in the Surrey Storm squad. Her fearless tenacious style of defence rattled so many world-class attackers, but it was her energy and athleticism that captured the netball nation,” Greenway said.

“The match up against Australia in the early rounds was when I really took note of just how talented she was. For her to feature in the Superleague is credit to the teams and coaches who continue to give international players, from so many different nations, the opportunity to step up and shine.

“I can’t wait to see her in action, how she adapts to the English game and how she continues to improve, as she is a real star both on and off the court.”