PADDY POWER are offering new customers an amazing new sign up deal where punters can earn up to £50 in FREE BETS by betting just a tenner on the bet builder.

The offer is available between Friday 15 January and Sunday 17 and is to be used on the weekend’s Premier League action. 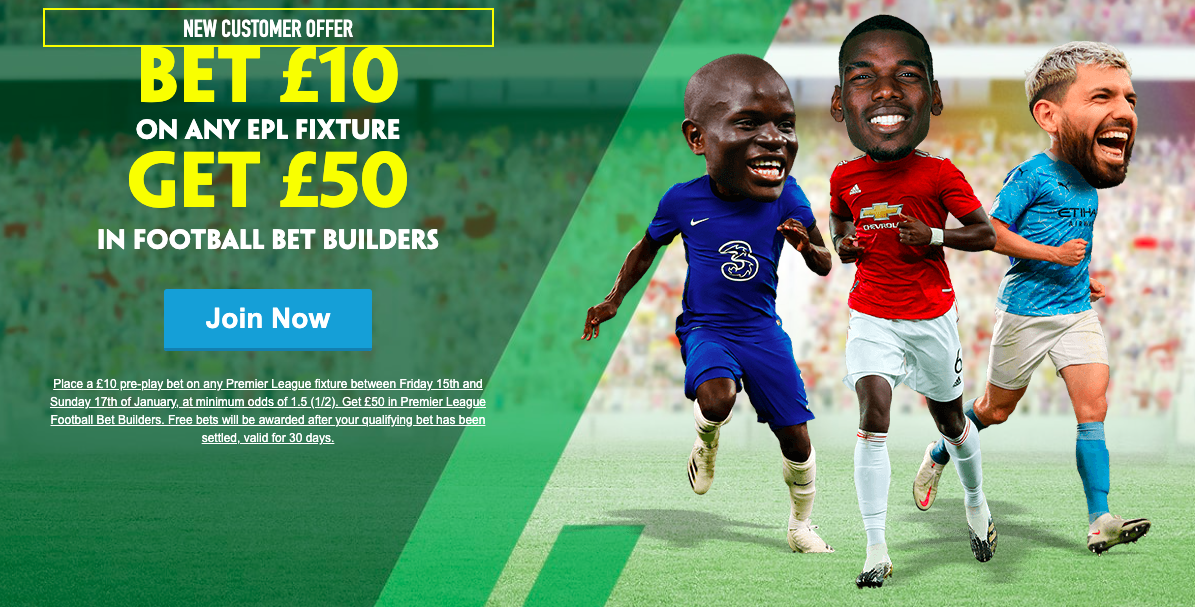 That means you could place a £10 bet builder bet on one of the first games on Saturday and when that bet settles you’ll be credited with £50 in free bets.

Your qualifying bet must be at odds of at least ½ and you will then have 30 days to use your free bets – claim it here*.

This week’s Prem action gets underway with Wolves vs West Brom at 12.30, with five games in total on Saturday including Fulham vs Chelsea.

Then Sunday includes the Liverpool vs Manchester United top of the table clash.

United go into the game top of the league after beating Burnley on Tuesday thanks to Paul Pogba’s second half goal.

Liverpool have failed to win their last three games in the league but beat Aston Villa’s youth side in the FA Cup last week.

Prior to that though they’d lost to Southampton and drew with Newcastle and West Brom.

They are now just a point ahead of Manchester City, Leicester and Everton – with City having played a game fewer as well.

City are the form team in the league having won their last four in a row and are now odds-on to win the league, and they face Crystal Palace Sunday evening.

But it’s United at the top of the pile going into the weekend after their run of four wins and a draw from their last five.

*Terms and conditions: Place a £10 pre-play bet on any Premier League fixture between Friday 15th and Sunday 17th of January, at minimum odds of 1.5 (1/2). Get £50 in Premier League Football Bet Builders. Free bets will be awarded after your qualifying bet has been settled, valid for 30 days. 18+ Begambleaware.org