FORMER Secretary of State John Kerry has blasted a 'f***ing' false report that he might run for president if Bernie wins the Democratic race.

Kerry seems to have heard enough of the rumor that was reported by NBC last night, issuing a fairly adamant denial that he will run for president on twitter, before removing his expletive. 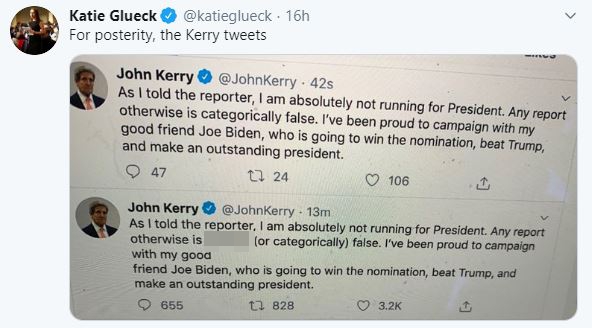 Presidential candidates are focussed on tonight's caucuses in Iowa and have been campaigning like mad to win the momentum from the 41 Iowa delegates before the New Hampshire primary next week.

Biden and Sanders are neck and neck in the polls, with Warren and Butigeg also doing extremely well.

Kerry, who is currently in Des Moines supporting Biden, tweeted: "As I told the reporter, I am absolutely not running for President. Any report otherwise is f***ing (or categorically) false.

"I've been proud to campaign with my good friend Joe Biden, who is going to win the nomination, beat Trump, and make an outstanding president."

An NBC network analyst who overheard Kerry on the phone in a hotel lobby over the weekend said he spoke about "the possibility of Bernie Sanders taking down the Democratic Party — down whole."

Many Democrat party heads are worried that Sanders' variety of proposals that he describes as progressive will be destroyed by President Trump who is certain to paint him as socialist.

Sanders is exceptionally popular among young and left-wing voters who are giving him a new surge in the primaries, flocking to his events in their thousands over the weekend and adding more complications for the more traditional Biden campaign should Sanders lose.

There are now only 11 candidates in the still-thinning field that once featured 28.

When asked by NBC, Kerry denied he was considering running, in spite of previously toying with the media on the subject.

A number of recent polls have shown Biden and Sanders neck-and-neck in Iowa.

Rep. Ro Khanna, a California Democrat who co-chairs Sanders' campaign, told DailyMail.com that he didn't believe the NBC report, nor did he believe there was any animosity toward Sanders, whom Kerry has worked with in the past.

He answered "not at all" when asked if he thought there was any way Kerry would try to sabotage the Sanders campaign if the Vermont senator were to win the Democratic nomination.

Everything you need to know about the Iowa Caucuses

GOT a story? EMAIL [email protected]