PARIS – France's women took a first step to follow in the World Cup footsteps of the French men.

Eugénie Le Sommer and Amandine Henry also got goals on a cool, windy night at Parc des Princes, the home of Paris Saint-Germain. French pop star Jain provided the pregame entertainment for the sellout crowd of 45,261, and French President Emmanuel Macron was among the spectators singing "La Marseillaise" and looking on.

"We knew that it was going to be a really emotional evening. But I think we managed it well," Renard said. "When you have more than 45,000 people singing the French national anthem, obviously it drives you forward."

France is hosting the tournament at a time when women's teams are increasing their push for equal treatment from FIFA and other soccer governing bodies. It is vying to become the first nation to hold both the men's and women's World Cup titles at the same time. 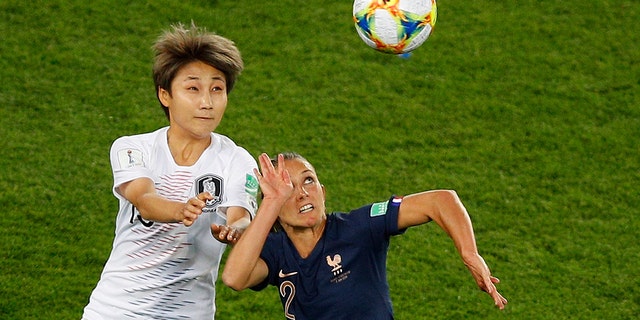 "I'm sure people expect or hope, and the same goes for us, we'd like to follow in the footsteps of the senior men's national team," French coach Corinne Diacre said. "But everything takes time. We won tonight, but we haven't still won anything. We have six more steps on the road that need to be taken. We need to be serious and focused for six games, and then we'll see what comes of it."

France's margin of victory was the largest in a Women's World Cup opener since China beat Norway by the same score at the first tournament in 1991. Four years ago, all nine teams that won their opener advanced from the 24-nation group stage to the round of 16.

The world's fourth-ranked team wasn't tested by No. 14 South Korea. France had a 17-0 advantage in shots during the first half and 21-4 overall.

Les Bleues, eliminated by Germany on penalty kicks in the quarterfinals four years ago in Canada, applied pressure from the start on goalkeeper Kim Minjung.

Le Sommer scored in the ninth minute off a cross from Henry and held up her hands in the shape of a heart in celebration after her 75th international goal, the earliest in a Women's World Cup opener. South Korea has conceded the first goal in all eight World Cup games it has played.

Griedge Mbock Bathy appeared to score in the 30th minute but the goal was disallowed in a video review, technology also used by FIFA at last year's men's tournament in Russia.

"On the spur of the moment you're happy and when the goal's disallowed it's frustrating, but you have to switch quickly," she said. "We had a lot of time left and we had a lot of opportunities to score."

Renard doubled the lead in the 35th from Gaëtane Thiney's corner kick as the crowd chanted "Wendie! Wendie!"

She made it 3-0 from Amel Majri's corner kick in stoppage time with her 22nd international goal. Ten of her last 11 goals have come on headers.

"It really feels good on a personal level," Renard said. "But I think above all as a team, because these were very important goals. It allowed us to go into the break with a 3-goal lead."

Henry added her 12th international goal off a pass from Le Sommer in the 85th.

South Korea substitute Lee Mina had the best chance for her team on a breakaway in the 76th minute, but the shot went just wide.

Renard, selected player of the match, is among seven players on France's roster that play for Lyon, which routed Barcelona 4-1 to win the women's Champions League for the fourth straight year and sixth time overall.

Diacre had surprised many when her roster did not include PSG's Marie-Antoinette Katoto, a 20-year-old who led the French league in scoring. Diacre also made the somewhat unexpected decision not to start Valérie Gauvin, who entered in the 70th. The coach said the decision was tactical.

France eliminated South Korea 3-0 in the round of 16 four years ago. Yoon Deok-yeo, South Korea's coach since 2012, said his team was simply outmatched by Les Bleues.

"The first match, the result is not that good," he said through a translator. "So for the upcoming two matches, we have to do our best. It is a must."