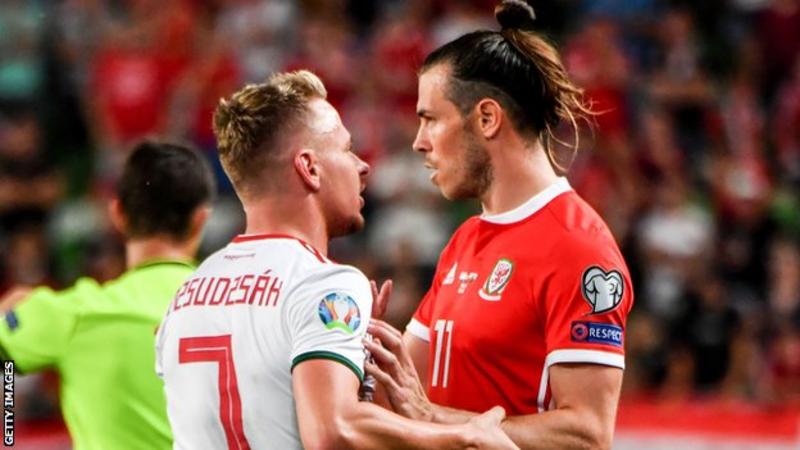 Wales succumbed to a late defeat in Hungary that could prove to be a severe blow to their hopes of qualifying for Euro 2020.

Roared on by a vociferous home crowd, Hungary threatened from set-pieces in a goalless first half during which Wales showed fleeting signs of their attacking potential but also left themselves defensively exposed.

Ryan Giggs’ side had a glorious chance to take the lead after an hour, as David Brooks and Tom Lawrence combined to tee up Gareth Bale – but the Real Madrid forward horribly miscued his close-range effort into the hands of goalkeeper Peter Gulacsi.

That was to prove costly as Wales failed to deal with a long ball to Hungarian striker Adam Szalai, who held off a weak challenge from James Lawrence and laid the ball on to Mate Patkai, who finished confidently to spark riotous celebrations in Budapest.

Despite starting this campaign as fourth seeds, a third successive victory takes Hungary to the top of Group E on nine points, three ahead of Slovakia and Croatia in second and third and six in front of Wales, who are now fourth.

Giggs’ men still have five games to revive their qualification prospects but to find themselves so far off the pace so early in this campaign is a cause for major concern.

Unhappy with his side’s errant finishing and sloppy defending during Saturday’s defeat in Croatia, Wales manager Giggs responded by making five changes as he named a far more attacking line-up.

While Brooks and Lawrence were brought in to add to the team’s goal threat, Chelsea teenager Ethan Ampadu was the recalled player who initially impressed as he combined with Joe Allen at the base of midfield to help Wales play with a composure they lacked against Croatia.

Despite signs of improvement, Giggs’ men looked vulnerable whenever they lost the ball; susceptible to Hungarian counter-attacks which added fuel to the fire of a cacophonous home crowd.

The hosts also looked dangerous from set-pieces, with centre-back Wili Orban – who scored twice in Saturday’s win over Azerbaijan – heading into the side netting from one corner.

This was a finely poised encounter, tension increasing with every minute that passed without a goal.

The electric pace of Daniel James seemed Wales’ likeliest source of making a breakthrough, with one of his forays down the left leading to a chance for Lawrence, whose low shot was saved.

That was a relatively difficult opportunity but there was no excusing Bale’s miss.

Wales’ record goalscorer looked destined to add to his tally when Lawrence laid on a low cross to him inside the six-yard box but Bale got his right-footed shot all wrong, spooning it harmlessly into Gulacsi’s arms.

With 10 minutes left, Hungary showed no such mercy in front of goal as Lawrence was easily beaten in his tangle with Szalai, giving Patkai the opportunity to seal a victory which the home players savoured with their fans for a long time after the final whistle.

Attempt missed. Ashley Williams (Wales) right footed shot from the centre of the box misses to the left. Assisted by Sam Vokes with a headed pass following a set piece situation.

Attempt missed. Roland Varga (Hungary) left footed shot from the left side of the box misses to the right. Assisted by László Kleinheisler.

Daniel James (Wales) wins a free kick in the defensive half.

Delay over. They are ready to continue.

Delay in match because of an injury Barnabás Bese (Hungary).

Ben Davies (Wales) is shown the yellow card for a bad foul.

Barnabás Bese (Hungary) wins a free kick in the defensive half.

Attempt missed. Ádám Szalai (Hungary) header from the centre of the box is close, but misses to the right. Assisted by Roland Varga with a cross following a set piece situation.

Botond Baráth (Hungary) wins a free kick in the defensive half.

Attempt missed. Gergo Lovrencsics (Hungary) right footed shot from outside the box is high and wide to the left. Assisted by Máté Pátkai.

Jamie Lawrence (Wales) is shown the yellow card for a bad foul.

László Kleinheisler (Hungary) wins a free kick in the attacking half.

Goal! Hungary 1, Wales 0. Máté Pátkai (Hungary) right footed shot from the centre of the box to the top right corner.

Harry Wilson (Wales) wins a free kick in the attacking half.

Attempt saved. Willi Orban (Hungary) header from the centre of the box is saved in the top left corner. Assisted by Botond Baráth with a cross.

Attempt saved. László Kleinheisler (Hungary) right footed shot from outside the box is saved in the bottom right corner.

Daniel James (Wales) wins a free kick in the defensive half.