Adam Hyeronimus will be allowed to ride through the early part of Sydney’s spring carnival until an appeal his heard on his betting ban.

The group 1-winning jockey on Friday was granted a stay of proceedings by the Racing NSW appeals panel, paving the way for him to continue riding. 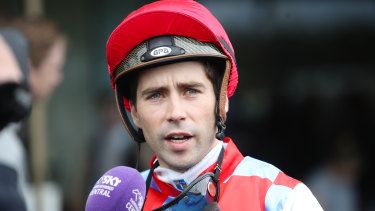 Hyeronimus was removed from rides at Canterbury on Wednesday and Hawkesbury on Thursday until submissions could be heard for a stay of proceedings.

Hyeronimus’ cousin and licensee Blake Paine was also given the green light to keep working until the appeal is scheduled.

He was accused of facilitating bets for Hyeronimus over a near three-year period and banned for two years and four months.

An appeal date is yet to be scheduled. Hyeronimus could ride for the majority of Sydney’s The Everest carnival and is coming off a career best season, which included a maiden group 1 win on Shout The Bar in the Vinery Stud Stakes.

Racing NSW stewards found Hyeronimus and Paine guilty on 30 of 31 betting charges, alleging the rider transferred about $30,000 to Paine over a near three-year period under the guise of “gift” and “savings”.

They accused Hyeronimus of having Paine back two horses he rode in races, including debutant Limbo Soul.

Racing NSW, which published a raft of text messages between Hyeronimus and Paine when delivering their findings, also hit the pair with a charge of giving false or misleading evidence.