Australian shooter Kiera Austin has revealed why she made the difficult decision to leave the Giants to join the Melbourne Vixens.

Austin surprised the netball community this week when she announced she would be joining the Vixens in 2022 after four seasons with the Giants. 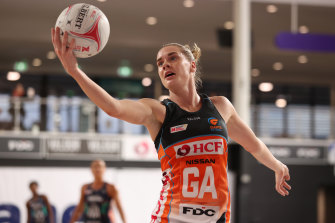 After debuting with the Giants in 2018, Kiera Austin is making her first ever club move. Credit:Getty

The 24-year-old suffered a torn ACL in the Giants’ first match of the Super Netball season and missed out on the club’s run to the grand final.

Austin said that while she owed the Giants for supporting her recovery, she felt she needed to make the move for the benefit of her career.

“I am appreciative for them looking after me this period of time and I didn’t realise until the back end of the season that this is something that I was probably going to do,” she said.

“I obviously owe a lot to them at the moment for looking after me in the early phases of my rehab, but at the end of the day, I felt a bit stagnant where I was.”

When Austin was sidelined, 19-year-old Sophie Dwyer was brought in to replace her. The teenager soared in the role, with her skills at GA position playing a major part in the Giants’ campaign.

Austin said if she had returned to the Giants in 2021, she would have been forced into a rotating shooting circle with Dwyer and goal shooter Jo Harten.

Ultimately, her return would mean more bench time for Dwyer, and Austin said she felt moving on would give Dwyer, with whom she shares a close relationship, a chance to shine.

“We’re both from the same association. I was probably in Sophie’s position a few years ago. I know how hard it is to be on the bench and to be that back-up shooter,” she said.

Austin will immediately slot in as starting goal attack at the Vixens and will likely play full minutes in most games.

The only battle now is getting fit in time for the start of the 2022 season in May.

“I obviously want to be ready for round one and I’m on track to be ready,” Austin said. “I want to come back from an injury and feel absolutely so confident in myself. And know that I’m good enough to be out there and I think I will feel that way at the Vixens.

“I want to get better as an athlete and I think that I can really unlock that potential with a change of environment.”

Austin’s rehab means she is missing Diamonds camp on the Sunshine Coast, where Liz Watson was announced as the new national captain this week. She replaced outgoing captain Caitlin Bassett, who has been in the role since 2017.

“We are thankful for the leadership Caitlin has shown and still shows in the group,” coach Stacey Marinkovich said on Thursday.

“While there are titles to be presented, it doesn’t take away the responsibility that everyone has to drive the Diamonds forward.”

Sports news, results and expert commentary. Sign up for our Sport newsletter.