PARIS — Michel Platini was in full flow when he was interrupted.

“Excuse me, are you Michel Platini?” a man asked, striding over with the purpose of someone who already knew the answer to his question. Platini, the former France midfielder, is one of the greatest soccer players of his generation — perhaps any generation. He had been in this situation many times. He nodded politely.

“I want to take a picture with you,” the man said. “You are one of my heroes.”

Well into his 60s, the man displayed the kind of childlike enthusiasm for Platini, 63, that has become common in France and beyond. At some point deep into their exchange the man introduced himself as José María Figueres, the former president of Costa Rica.

Platini allowed himself a wry smile before responding.

The words were laced with regret.

If things had been different, Platini would not have been there, seated on the terrace of a Parisian hotel on a rainy Tuesday three days before the start of the Women’s World Cup. He might have been meeting Emmanuel Macron at the Élysée Palace, as his former friend Gianni Infantino was that morning, or preparing to address FIFA’s 211 members as the organization’s president, as Infantino would do later in the week. He might have been basking in the glow of hosting the Women’s World Cup in his home country.

Instead, Platini was at the Peninsula Hotel, quietly fuming, counting down the days of his exile from the sport that has been his life’s work.

Platini’s world, and his dreams of running world soccer, came crashing down in the aftermath of the 2015 soccer corruption scandal. Banished for four years from the sport because of actions revealed as the scandal unfolded, Platini has watched from the sideline as Infantino, his former deputy and a lifetime administrator, has ridden the slipstream of scandal to become the most powerful man in soccer.

Platini and Infantino no longer speak. “He would not be UEFA general secretary without me, and he wouldn’t be FIFA president without me,” Platini said. 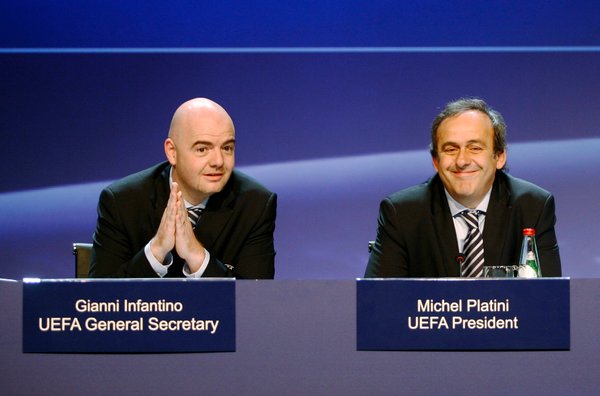 But now, as the end of his ban from soccer approaches — it expires in October — Platini is plotting a comeback.

First, though, he wants to clear his name.

Nevermind that a FIFA appeals panel, the Court of Arbitration for Sport and Switzerland’s Supreme Court all upheld the four-year ban issued to Platini, France’s former soccer captain, for secretly arranging for a $2 million backdated salary payment from FIFA’s former president, Sepp Blatter. The details of the payment, which Platini continues to insist was not illegal, emerged from a tip from a FIFA insider to the Swiss authorities — an example, Platini insisted, of a “great injustice,” but also of a longstanding plot to block him from running FIFA.

Lawyers are pressing Platini’s arguments in four different current cases, including one at the European Court of Human Rights.

For now, however, he remains only a consumer of the game he loves. The Women’s World Cup is the second major event on French soil from which Platini has been barred as a result of the ban. He missed the 2016 European Championship, too; that tournament took place only months after his ouster was confirmed, when the feelings of embarrassment and helplessness were at their most intense, he said, and when going outside meant disguising his appearance.

“You know, I’m Michel Platini — everybody knows me, everybody knows me,” he said, repeating the final clause to emphasize how hard he had found those early months. “The way people looked at me was totally different, that I was corrupted, like the others. You don’t go outside. You put on a hat. You put on glasses.”

For four decades before his self-inflicted troubles, Platini’s life in soccer had been lived out in public, ever since he emerged as a supremely talented attacking midfielder in the mid-1970s. A decorated career in which he played the lead role in bringing France its first major international title — the 1984 European Championship — led to a stint as national team coach and to a job as the head of the organizing committee for the 1998 World Cup in France. That led to his role advising Blatter, whose assistance helped Platini secure the presidency of European soccer’s governing body, UEFA, in 2006.

“When you wake up in the morning and you don’t know where to go after 50 years of work, and where not to go because you have no office, because you are banned from everything, you are out of UEFA, you have no work or nothing, what do you do?” Platini said.

He has spent most of the intervening years dealing with his lawyers, playing golf and walking, he said. When the mood strikes him, he watches some soccer on television.

The time away has left Platini hours and weeks to think deeply about what happened to him. He has been connecting the dots, linking his downfall to — at various times — Swiss officials, FIFA insiders, Blatter, Infantino and even the United States authorities who exposed the corruption case.

“It was a plot and only justice will decide, because FIFA will never help you,” Platini said.

The American authorities had secretly been building their case for at least three years before making it public with a series of dawn arrests at a five-star hotel in Zurich in May 2015. The sprawling indictment released that day accused some of the most influential leaders in soccer of bribery and corruption schemes dating back almost two decades.

Platini said that he first came in contact with those investigators in 2014, when he was briefly questioned about two former top North American soccer leaders indicted in the scandal — the American Chuck Blazer and Jack Warner of Trinidad and Tobago — when he arrived in New York on a trip with his wife, Christelle.

“I said, ‘I’m not inside FIFA, I’m inside UEFA,’” he said he told the investigators. “Everybody heard the rumors about Jack Warner and his money.”

Within two years, he had been accused of wrongdoing as well.

Platini’s ban, reduced to four years from its original eight, meant he was not in Russia for last year’s World Cup. But by then, being a ghost became second nature.

“Thank you for being a role model,” Figueres, the former Costa Rican president, said as he departed.

“For being what?” Platini replied.