PARIS — When Petra Martic reached her first Grand Slam quarterfinal at the French Open on Sunday, she felt not only relief, but validation of what she called “a pretty bold move”: hiring a former WTA player to be her coach.

“When I started working with her, everybody was doubting my decision,” Martic said of her coach, Sandra Zaniewska, whom she hired early last year. “People underestimated it, people even laughed at it, said I did a crazy thing — what am I doing? I’m not serious about my career because she’s so young and inexperienced. But I always knew. I heard this girl talking about tennis and I knew she knows what she’s doing.”

That a WTA player would hire a former WTA player as a coach might seem obvious or expected, but it remains an exceedingly rare choice. In its most recent index of players’ coaches, provided by the WTA, only five of the top 100 women list a woman as their primary coach — and one of those five split with her coach shortly before the French Open began.

Asked why they haven’t had female coaches, many players suggest few women are willing to travel, preferring to stay home with their families. A small group of male coaches are recycled by tour players, so outside voices are often not considered.

For Martic, who said Zaniewska understands her feelings “better than a guy could,” the atypical choice has paid dividends. She will play Marketa Vondrousova on Tuesday for a spot in the semifinals.

“She knows how it feels to go on court at a Grand Slam when nerves are kicking in and it’s not easy to control them,” Martic said of Zaniewska. “To have someone on your side who understands it and is not judging you or underestimating the way you feel, I think it plays a big role.” 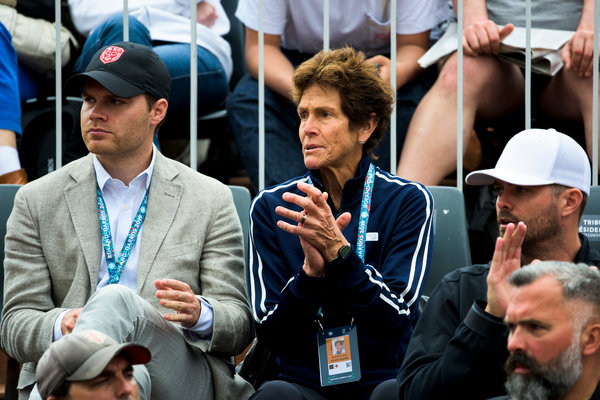 Zaniewska, who at 27 is a year younger than Martic, was studying business administration after she stopped playing in 2017, thinking a continued career in tennis would not be possible.

“I felt like maybe if I go into the business field, I could achieve more than in coaching,” Zaniewska said. “I wasn’t really sure how much I could do here, since there were practically none who were female coaches. Not that I didn’t want it, but it didn’t feel like it could be possible.”

She is not the only former WTA player who did not think a return to tour as a coach would ever be possible. Betsy Nagelsen McCormack, 62, was recently hired by Danielle Collins after spending years away from the sport while raising her daughter as a single mother and teaching tennis to young children in Florida.

“It never occurred to me; I never thought of approaching a player to coach,” said Nagelsen McCormack, who reached No. 23 in the singles rankings and is a two-time Grand Slam doubles champion. “I was just happy working with some kids.”

Collins, ranked 36th, has relished having a woman who had been ranked similarly guiding her, saying she was “so confused” by the proliferation of coaches who didn’t have the playing experience to give them credibility.

“It’s so different when I look over at Betsy,” Collins said. “I know she knows what I’m going through, rather than looking at some guy that has never been in this situation before and tries to act like he has.”

But despite the new opportunities gained by Zaniewska and Nagelsen McCormack, it remains extremely difficult for women to break into tennis coaching.

Naomi Cavaday played at Wimbledon five times, including holding two match points against the five-time Grand Slam champion Martina Hingis in 2007 when she was just 18. After she decided to stop playing competitively just before her 22nd birthday, Cavaday planned to return to the tour as a coach, to impart the experience she had gained on a young player.

But once she entered the world of performance coaching, Cavaday quickly learned how few doors would open for her. Her playing credentials were discounted, she said, considered inferior to that of male coaches who had achieved far less in their own careers.

Cavaday sees the discrimination she experienced in her tennis coaching career borne out by the number of female coaches at the elite levels.

“I don’t think anybody feels like they’re making a deliberate choice,” she said. “But everybody seems to be making the same choice, so there’s got to be something behind it, right?”

The number of women in other top jobs in tennis, including tournament directors, is also low. Cavaday braced herself for similar sexism when she went into broadcasting, but was surprised and relieved to find her voice welcomed. She is working at the French Open as a commentator for BBC Radio 5 Live.

“I’ve worked for the ATP — just in Rome I did the men’s final with Nadal and Djokovic — and everyone is great; it doesn’t seem to be any sort of issue,” she said. “But the parents of a 14-year-old boy in Britain think I don’t know what I’m talking about.”

The Serbian player Aleksandra Krunic, a self-described feminist who has worked with a succession of female coaches, has grown frustrated with her fellow players for not hiring women, saying women need to “stay united so we can change a little bit this man’s world thing.”

“Girls should think that maybe if one day they want to coach, they won’t want to be treated badly only because of their gender,” said Krunic, who split with the veteran coach Biljana Veselinovic shortly before the French Open. “They should put it in a perspective that if they want to be respected, they should respect fellow women.”

One of Krunic’s former coaches, Sarah Stone, established the Women’s Tennis Coaching Association to help male and female coaches better understand “the specific issues and needs of working with female athletes in tennis.” Stone has found her own needs unmet on tour, including one WTA tournament last year at which there was only one locker room for coaches, the rest of whom were male.

“From top pros, I’ve heard, ‘Too many women on tour would be too emotional,’” Stone told the women’s sports newsletter The IX. “I’ve heard, ‘I just wouldn’t respect a female coach.’ I’ve heard, ‘Women can’t hit as well as men.’ And a lot of top pros have never had a female coach, and when they get to the top of their career, they’re hesitant to try something new.”

The few top women who have hired a female coach have often found the best successes of their careers.

In 2017, Jelena Ostapenko won the French Open while coached by Anabel Medina Garrigues, and Garbiñe Muguruza won Wimbledon with Conchita Martinez when her main coach, Sam Sumyk, was on paternity leave. Martinez now works with Karolina Pliskova, who improved her ranking from seventh to second when she won the Italian Open in May.

Martinez said the best way to get more former players into the coaching ranks was to be seen thriving.

“It’s probably seeing us doing it, and being successful, and seeing other players being open to it,” she said. “Why not? We have a lot to bring to the table.”