So much of baseball involves thinking ahead: a runner on second base checking the infielders’ positions and reminding himself of the arm strength of the outfielders as he takes his lead. A shortstop asking himself whether the batter is more likely to pull a curveball into the hole or try to hit it the other way.

When the Ivy League’s baseball coaches meet virtually these days, they have found a new application for the familiar exercise of situational baseball: Should they take two buses to an away game in case somebody feels Covid-19 symptoms? Would Cornell and Penn play a series in Scranton, Pa. — cutting the 230-mile trip between the schools nearly in half — so the teams could return to their campuses after each game? When players return to campus, would they need to quarantine?

As the college baseball season kicks off around the country this weekend — just as pitchers and catchers report to major league camps in Arizona and Florida — these are contingencies for which the Ivy League coaches are thrilled to be planning. It means there is still a flickering hope they will have a season next month.

“Our mind-set is we’re gearing up and that at some point, we’ll get to put our uniforms on and compete,” said Princeton Coach Scott Bradley, whose athletes — masked up and bundled up — played catch and fielded grounders amid snow flurries early this month.

Still, with some Ivy League campuses (and classrooms) not fully open and last week’s decision to grant the conference’s seniors a one-year exemption to play as graduate students next year, there is an increasing belief that baseball and other spring sports like softball, track and field and lacrosse and will be canceled by the Ivy League’s university presidents. 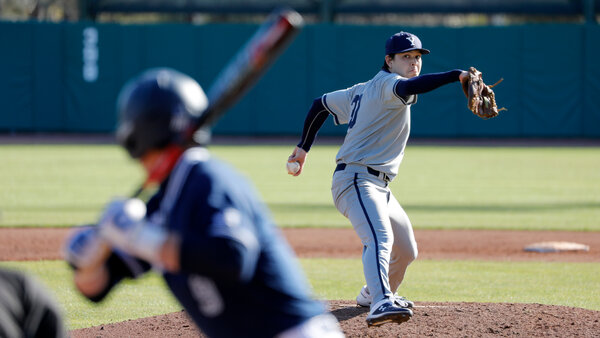 Robin Harris, the Ivy League’s executive director, did not respond to an interview request Wednesday, but a league spokesman said a decision could come this week. The Ivy League is alone among 31 Division I conferences in not having put out a conference baseball schedule. If the 2021 season is canceled, Ivy League baseball players will have lost almost two entire seasons to the coronavirus pandemic.

“It’s tough right now,” Cornell Coach Dan Pepicelli said on Wednesday, believing that the prospects for even a 21-game conference-only schedule were increasingly remote. “I try to keep an eye on the big picture. I get how we ended up here. But it’s frustrating when you see everybody else get started. We’re just trying to figure out how to get to the starting line. It’s not even about games.”

The Ivy League was the first conference to shut down sports last March, when it canceled its men's and women’s basketball tournaments. The decision outraged some basketball players, but not for long: A little more than 48 hours later, the N.C.A.A. tournaments, Major League Baseball, the N.B.A. and the N.H.L. had all stopped playing.

While major professional and college teams have returned, playing around and through outbreaks and stoppages, the Ivy League has not. Presidents of the league’s member universities announced in July that no sports would be played until Jan. 1, and in November the pause was extended until March 1. They thus became the first conference to cancel its football and basketball seasons.

In doing so, the Ivy League’s presidents have held onto a core principle: that athletes are treated essentially the same as students who do not play sports.

The latest on how the pandemic is reshaping education.