When Jerry Hairston Jr. ran out of contemporary comparisons to describe Mookie Betts, the Dodger studio analyst called his father for added perspective.

“Dad, the way Mookie plays, does he remind you of Willie Mays?” Hairston asked Jerry Sr., a former pinch-hitting specialist who broke into the big leagues as Mays was concluding his celebrated career.

“Jerry,” his father said, “his throwing arm, the accuracy, the way he runs the bases, how smart he is, it’s very, very similar.”

Betts, 28, is a player entering his prime, a few hundred home runs and a couple thousand hits short of Mays. For now, the Dodgers will be satisfied if the dynamic Betts can help craft eight more wins to cap this truncated season in championship fashion and end a 32-year title drought. The Dodgers opened play in the best-of-seven National League Championship Series against the Atlanta Braves with a 5-1 loss after sweeping past Milwaukee and San Diego.

On a star-heavy team with a history full of larger-than-life figures, Betts has the opportunity to do something distinct in the sport: Leading Los Angeles to its first championship since Ronald Reagan served in the Oval Office, without ever hitting in front of a packed Dodger Stadium crowd.

Despite flexing championship-worthy rosters for much of the past decade, the Dodgers have annually fallen short of replacing Kirk Gibson’s slow trot around the bases in 1988 as their latest moment of championship glory. The string of disappointments includes two World Series losses: one scandal-tainted defeat to the Houston Astros in 2017 and another to Betts’ Boston Red Sox the following season.

The Dodgers’ current roster has much of the same nucleus — including Cody Bellinger, Clayton Kershaw and Kenley Jansen — that has regularly bulldozed through the regular season, winning eight consecutive N.L. West titles, only to encounter postseason stumbling blocks. There have been some improvements this year: Their bullpen is deeper, the young standouts — pitcher Dustin May and catcher Will Smith — are each a year older and better, and Corey Seager and Julio Urías are now healthy.

But the biggest factor behind more October optimism for the Dodgers is the one they agreed to pay $365 million, the 2018 American League most valuable player who is surpassing already lofty expectations in Los Angeles. 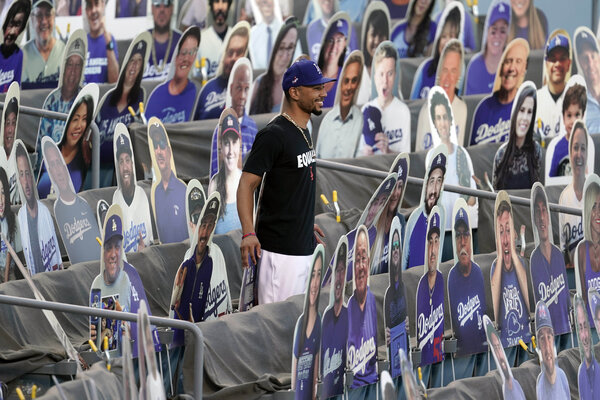 Fred Claire, the general manager of the Dodgers from 1987 through 1998, noted that the franchise’s historical jumps from contention to celebration had traditionally coincided with the addition of a memorable, talented player: Maury Wills in 1959, Lou Johnson in 1965, Gibson in 1988.

“It shows the impact that a player can make,” Claire said. “And that’s what Mookie is doing this year.”

The Red Sox parted with Betts, a generational talent known for his generosity away from the diamond, as part of a salary dump that frustrated fans in Boston. The three-way trade, which also included the Minnesota Twins, also provided the Dodgers with Brusdar Graterol, a young flamethrower who may play a pivotal playoff role out the bullpen, and starter David Price, who opted out of the season.

Once Dodgers Manager Dave Roberts slotted Betts permanently in the leadoff spot in mid-August, he and the rest of the offense clicked into position. He finished the sprint of a season with 16 home runs, 39 runs batted in and a M.L.B.-best WAR of 3.4. He stacked highlights, flexing a cannon arm, mixing speed, instinct and technique on the basepaths.

He also added to the Dodgers’ rich history of prominent Black players in a sport that has seen both interest and participation among African-Americans steadily dip over the last 30 years. Betts could become the team’s first Black player to win the M.V.P. Award since Wills in 1962 (outfielder Matt Kemp finished as runner-up to the Brewers’ Ryan Braun in 2011).

As Claire was attempting to engineer the next Dodgers championship team in the early 1990s, he landed Darryl Strawberry and Eric Davis, two potential cornerstones at the corner outfield positions, two Black stars from Southern California returning home. Injuries and personal issues derailed the collaboration.

“What a difference this could make — not only for our team, first and foremost, because that was my obligation, but for the community,” Claire said of his thinking at the time. “Two players coming back to Los Angeles at really what should have been the peak of their careers, and it just didn’t happen.”

Betts, though, quickly became one of the team’s leaders when the season began in late July. He has also used his voice and platform since arriving in Los Angeles. Though he had stood for the national anthem throughout his career — his father, Willie, served in the Vietnam War — Betts was the only Dodger to kneel during the playing of the national anthem on opening night.

He took the action after seeking further education on peaceful protests and realizing that kneeling was not aimed at disrespecting military veterans.

Later, Betts joined other athletes throughout sports in declining to play a game to protest the police shooting of Jacob Blake in Wisconsin. “In my shoes, I couldn’t play,” he said after the walkout in August.

The rest of the Dodgers joined him in solidarity, as did their opponent, the San Francisco Giants.

“I don’t think he overdid anything,” said Mike Morrison, Betts’ baseball coach at John Overton High School in Nashville. “I don’t think he tried to shove it down anybody’s throat in any way. He’s just drawing attention to some things that have always gone on in this country that we’ve got to do a better job of getting a handle on.”

Hairston hopes that Betts’ influence, in a city as large and diverse as Los Angeles, will also draw more minority children to seek out baseball. To him, Michael Jordan’s cultural dominance robbed baseball of many Black children who would have otherwise played the sport.

That could have been the route Betts had taken as well, had he grown a couple inches: His nickname, after all, is derived not from Wilson, the former Mets outfielder, but Blaylock, the former Atlanta Hawks point guard. At Overton, Betts was a skinny, pass-first point guard who earned honors throughout Nashville on the hardwood.

Morrison recalled watching Betts in high school as he waited to enter a pickup game against college players. Betts observed the players from the sidelines, ascertaining their strengths and weaknesses until he went on the court and succeeded against older players he had no business beating.

To Morrison, it’s not much different than watching Betts now — waiting out a pitcher, seeking a mistake, and then delivering a detailed scouting report back to teammates in the dugout.

“That’s kind of what he’s always been,” Morrison said.

These days, Betts reminds Hairston of a couple N.B.A. legends with his off-field demeanor. “He could care less about stats, it’s all about rings, plural,” Hairston said. “And that’s all Michael Jordan and Kobe Bryant ever talked about.”

Betts’s impact cannot be overstated, even if Roberts recently tried to understate it. Roberts said that Betts’s defense was a “game changer,” that he had an uncanny ability to control the strike zone and that he “does a lot on the bases.”

“He just made everyone around him better,” Roberts said. “But with that said, we all got to do our part.”

If Betts continues to do more than his part in leading the Dodgers to a title, the applause before that first at bat in front of a Los Angeles audience will be long and thunderous, the appreciation of three decades worth of frustration ended.