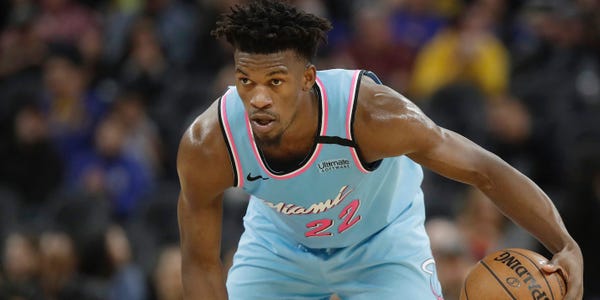 Throughout the 2019-20 season and the Miami Heat's playoff run, NBA analysts, from players to announcers, have remarked what a perfect match Jimmy Butler is for the team.

Butler joined the Heat in the summer of 2019 via sign-and-trade, pairing a hard-nosed, driven player with a franchise singularly focused on winning and demanding the best out of players and employees. The Heat now hold a 1-0 lead over the Boston Celtics in the Eastern Conference Finals and are three wins away from a Finals appearance.

According to ESPN's Zach Lowe, Butler became consumed by the Heat in recent years, all thanks to a comment made by Dwyane Wade in 2016, when the two were teammates on the Bulls.

According to Lowe, Wade, who left the Heat in 2016 over a contract disagreement, remarked that he didn't fully appreciate Miami's culture until leaving. From that point on, Butler's eyes were open.

According to Lowe, when Butler became a free agent last offseason, and it became clear he wasn't re-signing with the 76ers, he wanted to join the Heat. Miami didn't have cap space to sign him, but immediately called around the NBA to work out deals to bring him in, eventually resulting in a four-team sign-and-trade.

As Lowe said, Miami is an obvious free-agent destination because of its natural perks. But many players are also drawn to the Heat because of the team's culture and history of success.

Butler's agent, Lee, told Lowe that Butler never even discussed Miami as a city, only the people involved with the Heat.

"Obviously, it's an amazing place with amazing people, but Jimmy wasn't going there for the beach. Since he's gotten there, I think we have gone out to eat less than 10 times, and one of them was the Super Bowl. We didn't even talk about the tax advantages. The only questions he asked were of the background of the people involved and how they would build out the team."

The fit has proven to be a match made in heaven. When Butler joined the Heat, he immediately began working out at 4 A.M., convincing his teammates to join him.

As ESPN's Brian Windhorst wrote, the Heat have never "fallen faster or harder" for a player than they have for Butler, the type of leader "they would create in a laboratory if they could."

That adoration could be seen in the bubble after the Heat beat the Milwaukee Bucks in Game 1 of the second round of the playoffs. Cameras caught Butler and Heat president and NBA legend Pat Riley lovingly pointing at each other as Butler walked off the court.

Short, up-and-down stints in Minnesota and Philadelphia left the impression that Butler was a difficult locker room presence. Heat coach Erik Spoelstra pushed back on that narrative during the playoffs.

"He just fits everything about us, our fabric, and who we are," Spoelstra said. "These are extreme circumstances, they're not easy for anybody. And you need a level of discipline, of structure, and camaraderie. Jimmy, despite what, probably, the narrative is out there, he's a very likable guy in the locker room, and I think that helps in a setting like this."