Amid a haze of strewn pints and the swirling boos of his 20,000 supporters, Josh Warrington’s pursuit of redemption succumbed to the most unsatisfactory ending as an accidental clash of heads meant his long-anticipated rematch with Mauricio Lara was ruled a two-round technical draw.

After the distressing nature of Warrington’s defeat against Lara last April, when his body broke and betrayed him long before his pride had shattered, this was a cruel and unforgiving conclusion that leaves so many unanswered questions and will fail to alleviate those scars.

His astonishing bravery on that fateful night in Wembley did little to soothe doubts over what spirit remained towards the end of Warrington’s decorated career. In the end, he was denied the opportunity to prove those doubters wrong. But then, boxing is a brutal business, and there are no sympathies reserved even for its icons, and safety is always paramount.

That will not console the months of preparation and the psychological demons that still need to be conquered, though. A night when Headingley was supposed to be the pedestal that resurrected or razed Warrington’s career has instead left him in a disappointing limbo.

“I’m absolutely gutted, considering the reception when I walked out, they’ve paid their hard-earned money,” Warrington said in the ring afterwards. “These things happen. I thought I opened him up with a punch. I’m absolutely gutted. I keep on saying it, my manager and promoter could point me in a different direction, but I need the slate clean. I could see it was mine for the taking.”

There is little that can be gleaned from those two rounds, but the atmosphere inside the stadium was electric, the cheers like blood gushing through Warrington’s veins, the adrenaline spilling out of every pore. For the first minute, he remained cautious, testing the limits of the power that had caused him such shock. But before long, he burst into a signature flurry, trapping the Mexican on the ropes and unleashing a combination that offered a statement of intent, if not any telling damage. Lara is a sharp, powerful puncher, though, not content to suffer any shot without return, and delivered a wincing reminder of his power with a thudding right hand. 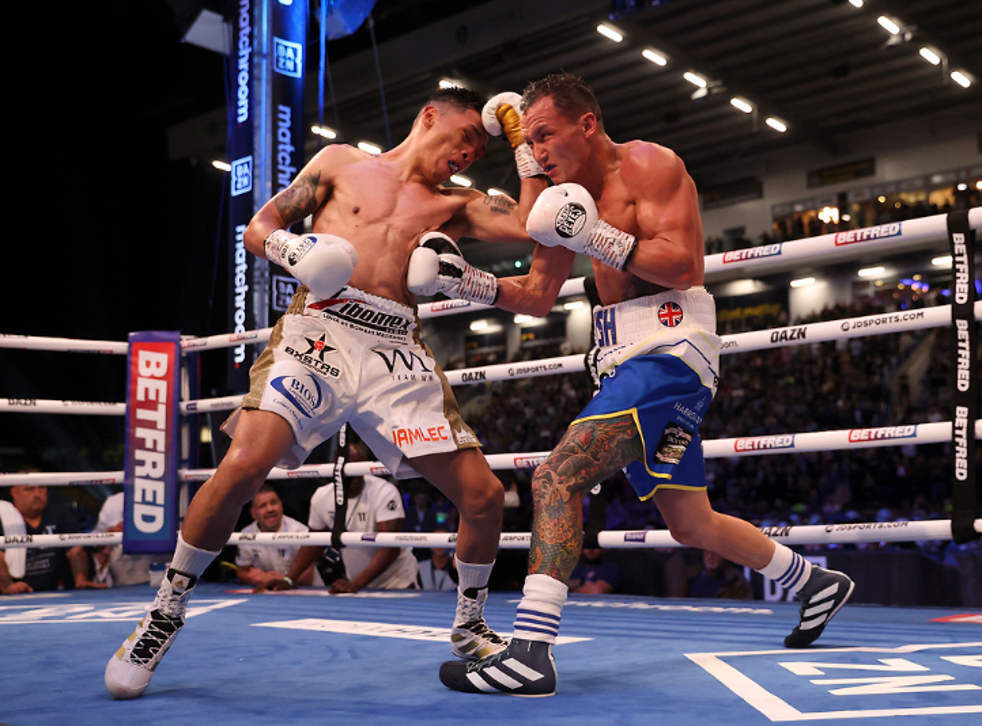 But early in the second, Warrington dove over his front foot and the two fighters clashed heads. The impact was obvious and immediately sickening, a nasty gash and stream of blood immediately apparent above the Mexican’s eye. Lara squinted in the corner, the damage evident, and both fighters sensed the fight could be called to an early end.

Desperate for a definitive conclusion, they both hurled themselves into gruelling combinations, their defences suddenly left wide open. With Lara struggling to see, Warrington found openings, but his power was always inferior and it never felt likely that he could finish the contest inside the two remaining minutes.

The fighters were called from their corners for the third round, but immediately the referee sent Lara back towards the British Boxing Board of Control’s ringside doctor. The crowd might have booed, but this is a brutal sport with worse consequences, and protocols have to be answered. That will have been of little mercy to Warrington, though, as the disappointment suffocated the months of his angst, anticipation and excitement. In his corner, members of his team seemed to tap their hearts, suggesting Lara had lacked the will to continue. This was a decision taken out of Lara’s hands, though, even if that will do nothing to ease the anger of those who’d lined Headingley in hope of witnessing another famous night for their hero.