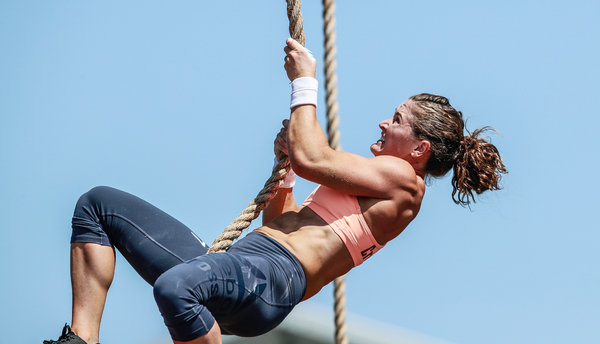 Hours on a rowing machine. A bicycle race. Push-ups followed by dead lifts. A mini-triathlon of swimming, paddle boarding and running.

In the decathlon, athletes compete in 10 track and field events. In the CrossFit Games, the namesake competition of the gym and exercise franchise, the athletes go further: 13 to 15 events, with most involving multiple disciplines.

Now in their 13th year, the CrossFit Games are being held this week in Madison, Wis. In the opening event on Thursday, athletes ran a quarter-mile, climbed a rope three times without using their legs and quickly lifted 185 pounds (for men) or 130 (for women) seven times. Then they did the sequence three more times, with a 20-minute total time limit. Later the same day there were competitions in rowing, kettlebell lifting and handstand walking.

The event attracts about 20,000 paying customers a day and are streamed on YouTube. At the conclusion on Sunday, the winners will be named the “fittest man and woman on Earth,” and each will receive $300,000.

The games are operated by CrossFit, which was founded in 2000 and now has over 15,000 affiliated gyms worldwide. Its followers are known for their devotion and demanding workouts.

One of the biggest challenges of the CrossFit games is that the athletes don’t know exactly what they will be doing until shortly before each event starts. Unlike decathletes, CrossFit competitors “can’t just practice 10 events and call it a day,” said Justin Bergh, the event’s general manager. “Anything is fair game.”

About 500 athletes from 114 countries entered this year’s games, which in the past had competitors from about 30 countries. The organizers sharply expanded the event geographically by inviting national champions from places like Papua New Guinea, Sri Lanka and Andorra.

One of the toughest competitions is the Fibonacci event, named for the numerical sequence in which every number is the sum of the preceding two. Last year that meant five handstand push-ups and kettlebell lifts, then eight and then 13.

Events growing tougher as they go along is not uncommon. In a race on Friday, athletes ran four miles while carrying weighted backpacks, and the weight was increased each mile.

“The variety of the tasks is how you can have confidence that the winner is the fittest in the world,” Bergh said. As he described the most difficult events, Bergh singled out the Murph, which was named for Michael Murphy, a Navy lieutenant and Medal of Honor recipient who died in Afghanistan in 2005. The event consists of a mile run, 100 pull-ups, 200 push-ups, 300 squats and then another mile run.

Mathew Fraser, 29, a former competitive weight lifter from Tennessee, has won the last three men’s titles and took an early lead this year by winning both of the first day’s events.

Tia-Clair Toomey, 26, had a running background, then began doing CrossFit and went on to represent Australia in weight lifting at the 2106 Summer Olympics. She is a two-time defending champion and as of Friday was in contention again.

“I’m really happy with that performance,” Toomey said, “but we don’t know what’s coming, and you just have to take advantage.”

CrossFit gyms have become known for their challenging “workouts of the day,” and the organization has sometimes been criticized for pushing ordinary athletes too far, encouraging them to risk injury. During the CrossFit Games, the workouts of the day tend to match the events the elite athletes are performing.

“They vary by degree but not kind,” Bragh said, adding that “a grandmother would scale the workout down.”

Many competitors in Madison struggled to meet the time limits in the early events. Fraser, though, displayed an almost blasé confidence after winning the row/kettlebell lift/handstand walk event in 5 minutes 37.02 seconds.

“It’s all about the transitions,” he said. “Keeping it cool on the row. Trying to get as few no-reps as you can on the thrusters, then kick up whenever you feel ready.”

Victor Mather covers every sport, no matter how small.