Controversial former football pundit Matt Le Tissier has once again caused outrage on social media after sharing an image appearing to compare the plight of the holocaust to the present day situation of wearing masks during the coronavirus pandemic.

Le Tissier, who was recently sacked from his position at Sky Sports as a long-serving TV pundit on popular football show Soccer Saturday, has remained outspoken on several contentious issues throughout the year.

Taking to Twitter on Friday, Le Tissier re-shared an image which had been posted by a user in response to a video showing a police officer challenging a member of the public on a train about the failure to wear a protective mask. 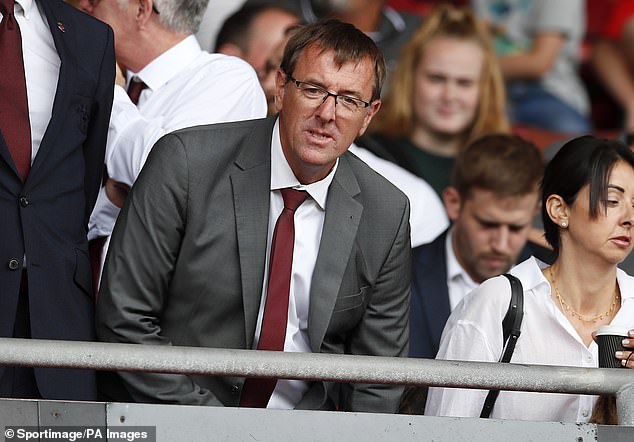 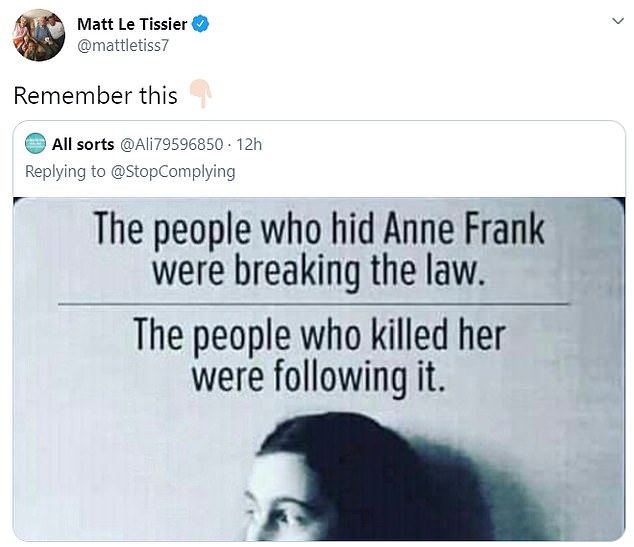 The post showed an image of Anne Frank, along with a caption regarding her treatment

The image used showed holocaust victim Anne Frank, with words above which read: ‘The people who hid Anne Frank were breaking the law. The people who killed her were following it.’

A huge backlash immediately followed, with Twitter users giving Le Tissier a piece of their mind and strongly condemning his actions.

Le Tissier did not delete the post, but appeared to quickly backtrack on its intended meaning.

Following up, Le Tissier wrote: ‘This appears to have got a lot of bots and trolls tweeting me about about masks! Yet I’ve just checked again and still I find no reference to masks anywhere in the original tweet!.’ 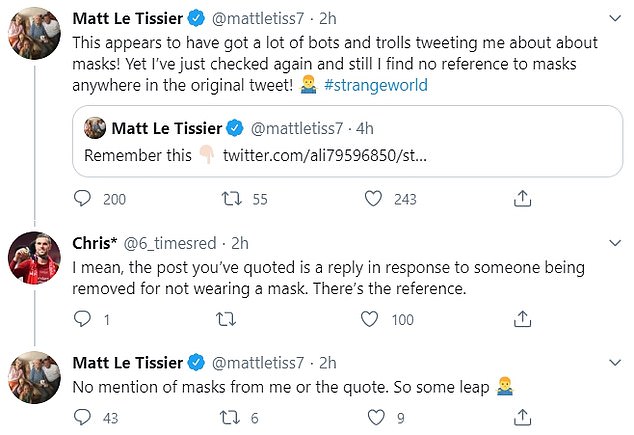 When challenged about the Holocaust reference, Le Tissier replied with laughing faces

When pointed out by one user that the reference to the wearing of face masks had been inferred by the original post, which was posted under the video of the train altercation, Le Tisser doubled down and responded: ‘No mention of masks from me or the quote. So some leap.’

Another direct response to Le Tissier read: ‘Perhaps you’re being ignorant rather than deliberately offensive but please don’t invoke the Holocaust to support your crackpot views about masks. Thanks in advance,’ to which the former Southampton player simply responded with a series of laughing faces.

The incident joins a long line of controversy courted by Le Tissier, the most recent of which in the form of his questioning of the support of his former employers Sky Sports for the Black Lives Matter movement, and declaring he would be re-evaluating his personal stance.

The 51-year-old hit out at the movement’s ‘far-left ideology’ – as black footballer Karl Henry also branded the group ‘divisive’.

Last month Le Tissier announced he would be temporarily quitting social media, saying he had been repeatedly targeted by cyber bullies who were attempting to force him out of his job. 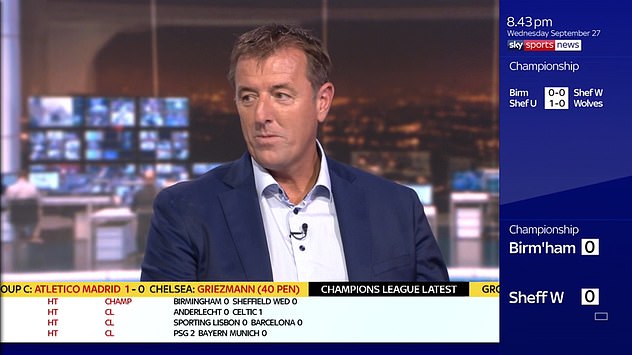 Jeff Stelling, who anchors the popular show, described it as ‘one of my saddest days ever’

Throughout the year Le Tissier had repeatedly remained vocal on the topic of the global coronavirus pandemic, making questionable comments regarding the way the situation should be handled.

He urged fans to ‘look beyond the headlines and government propaganda’ and talked up the topic of herd immunity.

In the wake of personal criticism, the retired playmaker released a lengthy statement detailing his position, before later going on to deny that he identified as an ‘anti-vaxxer.’

Le Tissier had wrote: ‘Yes I’ve made mistakes and errors of judgment in the past, which I regret, but I believe the good I’ve done far outweighs the mistakes.

‘I have huge sympathy for anyone who loses someone close to them by whatever health reason, I recently lost my grandad so I know how it feels.

‘You trolls and bots out there who try to belittle me with your snide remarks trying to make out I’m some uncaring individual who has no empathy, you couldn’t be further from the truth and I feel incredible sorry for you that there is so little joy in your life that you resort to this.

After being sacked by Sky Sports on August 26, Le Tissier issued a short statement online which read: ‘Enjoyed my time at sky sports, time to look forward to life’s next challenge, thank you for the support down the years and special thanks to the backroom team… good luck all have a lovely day.’

The 51-year-old remains out of football work since, though still remains an official ambassador of Premier League side Southampton.