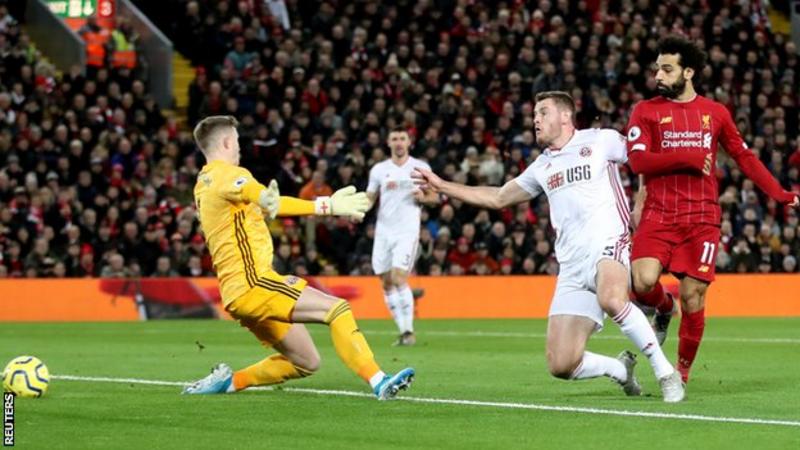 Unbeaten Premier League leaders Liverpool made it a full year without losing in the top flight as Sheffield United were brushed aside at Anfield.

A slice of good fortune enabled the Reds to take an early lead – George Baldock’s slip allowing Andy Robertson to set up Mohamed Salah for a simple close-range finish in just the fourth minute.

But there was nothing fortuitous about their win, which Sadio Mane sealed, finishing at the second attempt after being played in by Salah.

It maintains the Reds’ 13-point advantage at the top of the division after nearest rivals Leicester and Manchester City both won on New Year’s Day.

Jurgen Klopp’s side have dropped just two points from a possible 60 this season.

For Chris Wilder’s side, this was a second successive defeat, but they remain firmly in credit from the first half of their league campaign and sit eighth in the table, just two points off fifth.

Liverpool’s 18th consecutive league win and 51st top-flight encounter without defeat in a row at Anfield was another showcase for a side working to near maximum capacity.

Despite Klopp labelling as “criminal” a festive fixture schedule that has seen his side play six games in 17 days, the German kept his team changes to a minimum.

He did have to make a late alteration, bringing James Milner in for the man he originally drafted in to the side, Naby Keita, who injured himself in the warm-up, but it made little discernable difference.

In fact, Milner was superb as one third of a brilliant midfield unit, along with Jordan Henderson and Georginio Wijnaldum.

Their work-rate, movement and accuracy of passing provided the platform, with Virgil van Dijk alert and efficient on the rare occasions Sheffield United were allowed a kick in the Liverpool half. 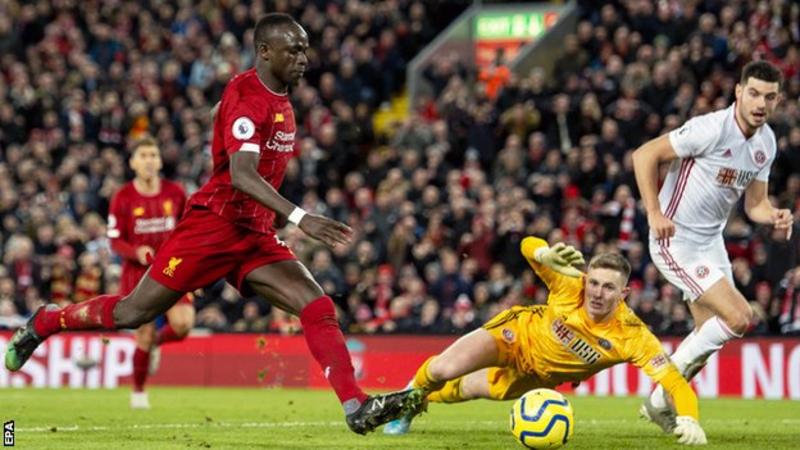 Salah scored one, but he would have had more but for the combination of some excellent reflex saves from Dean Henderson and the woodwork – the Egyptian’s chipped second-half cross floating past everyone and hitting the inside of the post.

Roberto Firmino went close to his first Anfield goal since March with a curling effort just past the post and should have got it later in the second half, but failed to connect with Trent Alexander-Arnold’s low cross from point-blank range.

In the end, though, two was more than enough to seal another win and move another step closer to their ultimate goal.

However, it would now take an implosion of unprecedented proportions to deny the Reds a first top-flight title in 30 years.

Sheffield United enjoyed a stellar 2019 of their own, in which they achieved promotion back to England’s top division for the first time since 2007 before exceeding expectation to end the year firmly embedded in the top half of the table.

Such has been their form under Chris Wilder only three sides in the country had a superior points-per-game record across 2019 – the current Premier League leaders, the top-flight’s reigning champions Manchester City and West Brom, who presently have the joint most points in the Championship.

This is the first time they have suffered back-to-back defeats under Wilder since the start of last season and they have come at the two toughest grounds to visit in the country – Manchester City’s Etihad Stadium and Anfield.

Wilder prepared his team for Thursday night’s daunting match with a final practice session on Stanley Park, the public park next to Anfield, which included one moment when a dog joined them and urinated on one of their cones.

There is a lot more to this Sheffield United side than graft, although they were given only fleeting opportunities to demonstrate this at Anfield.

United asked more questions of the Reds than most sides this season when they met at Bramall Lane in September, an error from goalkeeper Henderson leading to the game’s only goal from Wijnaldum.

They gave a solid account of themselves here, where there is no shame in defeat – 17 sides have directly preceded them with the same fate, some wilting a lot more readily than the Blades.

David McGoldrick has yet to score this season, but he went close soon after Liverpool’s opener with an effort that Alisson had to tip over.

And John Lundstram had the ball in the net, but long after an offside flag had already ruled any potential goal out.

They should also have had at least a consolation goal near the end, but somehow substitute Oliver McBurnie failed to poke the ball in from close range at the back post from a low cross. 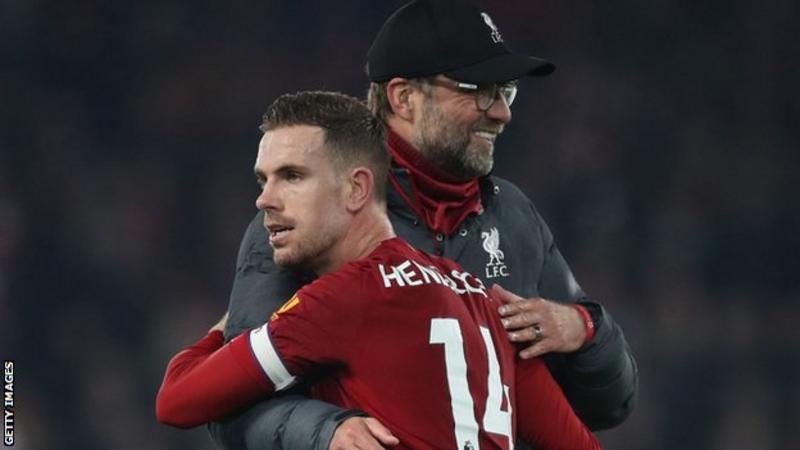 Rare back-to-back defeats for the Blades – the stats

‘The goals were exceptional’ – what they said

Liverpool manager Jurgen Klopp speaking to Match of the Day: “It’s obviously good [to go unbeaten for a year] but the target was not to extend this [run], but to win the game. The best thing you can say when you play against Sheffield United is to keep the game not spectacular. We controlled the game.

“We played around their formation, played behind, in-between, broke the lines and had counter-attacks. All the things we want to have. The boys played sensational.

“You saw these glimpses in the game where we were a bit sloppy. They wanted two or three situations in which they could score in. We needed that concentration and that was incredibly tough but the boys did so well. Nothing ends. We have to make sure we are ready again.

“I am really happy and really proud of the boys. We should not take things like this for granted. The way we controlled Sheffield United was exceptional. In possession we were incredible, we were calm but lively as well. The goals we scored were exceptional.”

Sheffield United manager Chris Wilder speaking to Match of the Day: “Little bit drained – disappointed in our performance tonight, we never laid a glove on them. If there’s ever an example of a team doing well and with the desire, that’s Liverpool.

“The first balls, second balls, running forward, tackling, defending, being aggressive; they [Liverpool] showed all those qualities. It’s a great example for our team. We were off the pace. Maybe the Manchester City game took more out of them than I expected – our goalkeeper kept us in the game. For us to get anything, we would have had to perform really well and we didn’t.

“Every time we tried to press they played around us with the quality they have got. All the stuff that gets talked about in academies, with young coaches – just look at what they did in terms of the basic stuff that gives you an opportunity to play and dominate. That’s what they did to us. Not only technically, but tactically, they are a fantastic side. We have been well beaten.

“People talk about us having afternoons and nights like this when we came to the Premier League. We have not had that done to us all season until now so that’s a small comfort. But it still hurts, we are still professionals. I believe if we played near our best we could have got something but we weren’t anywhere near it.”

Liverpool have a testing January, starting with a Merseyside derby against Everton in the FA Cup on Sunday, before they travel to Tottenham in the league the following Saturday.

Sheffield United host National League side AFC Fylde in the Cup, before hosting West Ham in the Premier League on Friday, 10 January.

Chris Basham (Sheffield United) wins a free kick in the defensive half.

Muhamed Besic (Sheffield United) wins a free kick in the defensive half.

Attempt saved. Oliver McBurnie (Sheffield United) right footed shot from very close range is saved in the top centre of the goal. Assisted by Jack O’Connell with a cross.

Virgil van Dijk (Liverpool) wins a free kick in the defensive half.

Attempt saved. Sadio Mané (Liverpool) right footed shot from a difficult angle on the left is saved in the centre of the goal. Assisted by Andrew Robertson.

Attempt saved. Mohamed Salah (Liverpool) left footed shot from the right side of the box is saved in the bottom right corner.

James Milner (Liverpool) wins a free kick in the attacking half.

Attempt blocked. Roberto Firmino (Liverpool) right footed shot from the centre of the box is blocked. Assisted by Andrew Robertson.

Virgil van Dijk (Liverpool) wins a free kick in the defensive half.

Attempt missed. Roberto Firmino (Liverpool) right footed shot from outside the box is close, but misses to the right. Assisted by Andrew Robertson.

Attempt missed. Roberto Firmino (Liverpool) header from the centre of the box misses to the left. Assisted by Jordan Henderson with a cross.