Emma McKeon has become the first Australian Olympian to win 10 medals with her victory in the 50m freestyle final on Sunday.

McKeon qualified fastest for the last individual women’s swimming race of the Games after setting Olympic records in her heat and semi-final swims. 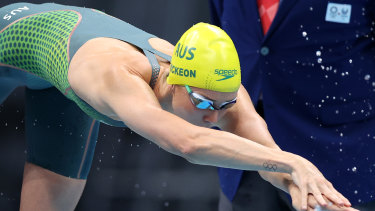 She continued her brilliant form, touching the wall first in 23.81, an Olympic record, ahead of Sweden’s Sarah Sjoestroem (24.07) and Denmark’s Pernille Blume (24.21).

McKeon, who now has three gold medals at these Games, is only the fourth woman in Olympic history to do the 50m and 100m freestyle double.

McKeon is now the only Australian with double digit Olympic medals. Her 50m first place leaves her with six medals in Tokyo, to go with the four medals she won in Rio in 2016.

As for Cate Campbell, her final push for an elusive individual gold medal was unsuccessful. She finished in seventh (24.36). At 29, this will likely be her final Olympic campaign.

Campbell finished fifth in the 50m freestyle final five years ago at Rio in a time of 24.15. She has three golds, one silver and three bronze overall from four Olympic campaigns.

Australia now has eight gold medals, three silver and eight bronze from the pool – an extremely pleasing haul compared to other years. It equals the tally of eight golds set at Melbourne in 1956.

It easily surpasses recent results from Rio (three golds) and London (one gold).

The 27-year-old has now equalled the joint women’s record set by Germany’s Kristin Otto (1988) and American Natalie Coughlin (2008) as the only swimmers in history to win six medals of any colour at a single Olympics.

McKeon could create more history on Sunday if Australia’s women’s 4x100m medley relay team is successful. If Australia finish in the top three, McKeon will equal the record for the most medals by any female athlete at an Olympics (7). Soviet gymnast Maria Gorokhovskaya managed the feat at the 1952 Helsinki Games.