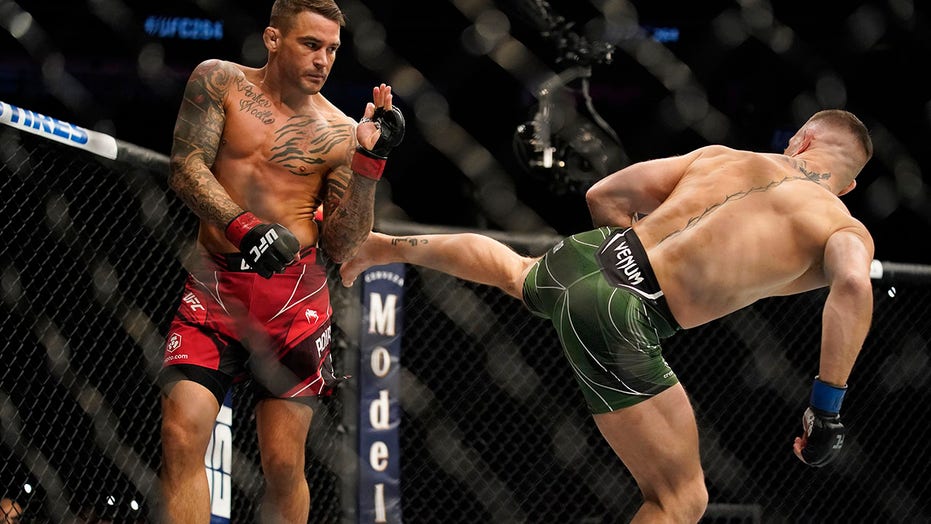 Conor McGregor may have injured himself before slipping and falling to the mat during his fight Saturday night at UFC 264 against Dustin Poirier.

Additional breakdown of the fight on Monday may have pinpointed the exact moment where McGregor first hurt himself. MMA coach Eric Nicksick wrote on social media his mom told him she thought that McGregor was first injured with about 10 seconds left in the first round after he kicked Poirier’s elbow.

“Credit to my mom, yes, my mom wrote me at 7am to tell me she thinks Conor broke his foot off Dustin’s elbow after throwing the rear teep kick. After slowing it down, it makes a lot of sense. Watch the integrity of his foot before and after. You be the judge,” Nicksick wrote on Instagram.

After McGregor delivered the kick, he would dodge a punch from Poirier and fall backward. He would be down on the mat and would not get back up.

McGregor’s coach John Kavanaugh also alluded to the same clip in an interview.

“He very aggressively threw that kick, Dustin shelled with the lead hand and the foot wraps around the knee, in a similar fashion to poor old [Anderson] Silva and [Chris] Weidman,” Kavanaugh told UFC broadcaster Laura Sanko.

“He stands back on it and you can see the bone almost protrude through the skin; I don’t know how he didn’t fall there, but he comes in and they both exchange crosses, they both miss, he goes to step back and that is where you have that horrifying fold.”

He also said McGregor had a bit of an injury to his ankle in camp but was unsure whether it played a part in the devastating injury the Irishman suffered.

Poirier would be given the win via a doctor-stoppage technical knockout.

Poirier mentioned in his post-fight interview with commentator Joe Rogan he believed McGregor’s ankle fractured when he checked a kick.

But Poirier’s timing didn’t exactly line up with Nicksick’s video.

McGregor had surgery to repair a fractured fibula and tibia.