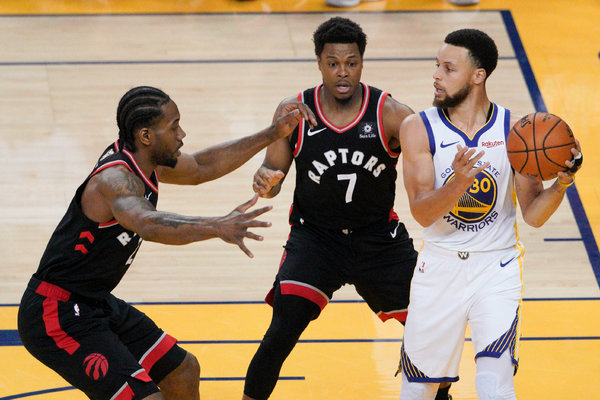 1st Quarter: Nobody is scoring for Golden State except Curry.

Toronto’s lead is up to 26-16 thanks to an offensive approach that spreads the ball around to find the right shooter on every possession. Marc Gasol is leading the way with 8 points, but Danny Green has a pair of 3-pointers, Pascal Siakam has looked far better than he did in Game 2, and Kawhi Leonard has been effective as well.

For the Warriors, it continues to be almost entirely the Stephen Curry show. The guard has 12 points (1 of 8 from the field), and is clearly happy to shoot in heavy traffic, but Golden State’s only field goal by a player other than Curry was a 2-footer by Andrew Bogut with 4:14 left in the quarter.

The non-Currys are currently 1 of 17 from the field.

In the early going, Toronto is off to a quick 15-7 lead thanks to a diversified offense that is succeeding against Stephen Curry’s one-man show.

Curry opened the game with a miss from 3-point range, but he hit a short jumper on the next possession and then made a statement with a wild 30-footer that found home. His teammates, however, opened the game a combined 0 of 4 from the field, including an airball on a 3-point attempt by Draymond Green.

Toronto, though, was able to get to the line quickly after fouls by Shaun Livingston and DeMarcus Cousins, and also got quick baskets from Pascal Siakam, Danny Green and Kawhi Leonard, showing a more diverse attack than at any point in Game 2.

DeMarcus Cousins, starting once again at center for Golden State, won the tip against Toronto’s Marc Gasol and Game 3 is officially underway. The Warriors, chasing a third consecutive championship, will play tonight without three of the team’s top seven players.

What to watch for in Game 3

The Golden State Warriors should be riding high as they return to Oakland for Game 3 having stolen home court advantage in the series by winning Game 2 in Toronto. But with Kevin Durant still out, Kevon Looney lost for the series and Klay Thompson out for Game 3, Golden State is vulnerable ahead of tonight’s crucial game against the Raptors.

Klay Thompson is officially out

Over the last seven seasons, the Warriors have played 120 playoff games, and Thompson has started all of them. He’s the only player on the team who can make such a claim — Draymond Green is second with 119, having missed only Game 5 of the 2016 N.B.A. finals because of a suspension — but Thompson’s streak is over thanks to an injured hamstring. Shaun Livingston will start in his place. Thompson had played through injuries before, including a sprained ankle in last year’s finals, so there is no doubt that he lobbied the training staff to allow him to play. Now Golden State will play its first postseason game without him since 2007, when he was still in high school.

Can the Raptors stay out of foul trouble?

Toronto has kept its rotation tight in these finals, with eight players combining for 473 of 480 minutes. (Patrick McCaw, the former Warrior, got the remaining seven.) Potentially standing in the way of keeping things so neat — especially with this series leaving Toronto for two games — is the foul trouble of both Marc Gasol and Kyle Lowry. Gasol fouled out of Game 1, and had four fouls in Game 2. Lowry had five in Game 1 and fouled out of Game 2. Considering how important both players are to the team’s defensive scheme, keeping them on the court is paramount.

A potential boost for the Raptors’ defense, though, could come from OG Anunoby should the small forward be sufficiently recovered from his appendectomy. He was available for Game 2 but did not play.

Andre Iguodala is the oldest player on either team, and he and Leonard are the only active ones who have been named most valuable player of a finals. But with Iguodala coming off one of the biggest shots of his career (the Game 2 clincher), and with people once again bringing up the viability of the Hall of Fame for him, the versatile swing man recently talked openly about how he plays to support Curry and “protect his legacy.” He also cleared up that while he does not love being called Iggy, he doesn’t mind being called an author.

DeMarcus Cousins could hardly be a more different player from the injured Looney. The four-time All-Star is known almost entirely for his offense, and he has struggled with defense, especially during his brief time in Golden State, which has never seen him 100 percent healthy. As a result, Cousins, in just his third game back from a severely injured quadriceps, is an awkward fit to fill the crucial crunchtime minutes that the Warriors have often gotten from Looney. There is some optimism that Cousins’s strong second half in Game 2, when he showed a strong nose for rebounds and some intricate passing, means he is ready to step up his minutes. But there is also a strong possibility that more minutes will instead have to fall to Andrew Bogut or Jordan Bell.

The Raptors miss their bench players.

In Game 1, the Raptors got a subpar performance from Kawhi Leonard (23 points on 5 of 14 shooting), great games from several of the team’s less heralded players, and they won. In Game 2, Leonard was dominant (34 points, 14 rebounds), the supporting cast regressed a great deal, and they lost.

Even against a short-handed Warriors team, Toronto will need a lot more from its “other” players to win in Oakland’s deafening Oracle Arena. A return to form from Pascal Siakam, the hero of Game 1, would help, but so would a stepped-up performance from Kyle Lowry, Toronto’s only All-Star besides Leonard; Lowry scored just 7 points in Game 1 and only 13 in Game 2.

Lowry was confident ahead of Game 3, telling reporters that he expected “to do whatever I need to do to help my team win. Being on the road, I may be more looking for my shot, being more aggressive.”

Toronto may need a new strategy to defend Stephen Curry.

A hallmark of Curry’s career has been that no matter how down he or his team gets, it takes just one or two of his circus shots to get the Warriors right back into a game. It’s why he has, essentially, become the Roboshooter that Coach Steve Kerr once prophesied. Game 2 was no exception, with Curry seeming sluggish throughout the first quarter only to spark the team’s comeback, which began in the second quarter and continued into the third.

In the fourth, Toronto resurrected an old defensive concept called the box-and-one, in which four players form a zone defense (the box) and the remaining one attacks Curry directly. He called the strategy “janky” and said it was “disrespectful” to his teammate Andre Iguodala. He may have a point about the disrespect, as Iguodala proceeded to hit a game-sealing 3-pointer, but the jankiness is debatable since the plan seemed to negate Curry’s ability to score.

The question now is whether Coach Nick Nurse would go back to that defense when Curry is on the floor with four subpar shooters, or if he would avoid it, knowing that Kerr has had a few days to think about how best to crack the scheme.

Benjamin Hoffman is a senior staff editor and regular contributor to the Keeping Score column in sports. He joined The Times in 2005. @BenHoffmanNYT • Facebook