Western United coach Mark Rudan is confident Western United will bounce back to be genuine title challengers next season after his A-League newcomers came up just short in their first campaign, losing to Melbourne City in the semi-final on Wednesday night.

While City prepare to meet Sydney in the title decider on Sunday evening, Rudan and his players can only think of what might have been after a semi-final in which they, not City, seemed to be the more likely grand finalists for long periods. 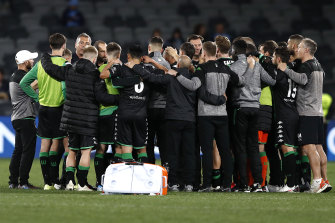 Mark Rudan speaks to his players after the semi-final loss to Melbourne City.Credit:Getty Images

"It tells you how the game panned out when their goalkeeper is man of the match."

The Western coach does not believe the cramped schedule – the semi-final was their eighth game in 33 days – made the difference.

"I don't think so. Up until that moment [when City got the penalty that gave them the lead] we were the better side, we had more shots on target and created more opportunities.

"I am astounded by how well they backed up and how hard they fought throughout the match."

The only way for the club, he says, is up.

"There's a lot to build on for next year. A lot of bright signs as far as I am concerned. It's still raw and fresh but our goal is to improve in all areas from top to bottom.

"If you have a proper pre-season to work with this current group and add a few going forward, we have got a fantastic foundation and base. You can see just how much we have improved from the first game of the season to the kind of football we want to play.

"Things take time but for a new club it's been a hell of a ride, just to see how far we have come to make the last four I think it speaks more than enough for all the effort we have put in.

"All the players have agreed that if the salary cap changes so do their contracts. The thing that gives me the biggest joy is the cultural environment we have been able to create."