The tears came even before Mikaela Shiffrin won her first race this past season.

She always takes a nap or meditates between runs and, when she awoke that December day in Courchevel, France, she found herself crying because she could feel what was coming and she knew the flood of emotions it would bring.

The win, in giant slalom, would be her first victory since the unexpected February 2020 death of her father, Jeff, whose low-key presence loomed large throughout every aspect of the two-time Olympic champion’s life.

“This is going to be first the race I win without him saying anything. Without being able to call him,” Shiffrin said recently, recalling her thinking that day. “This is the start of the rest of my ski career without one of the biggest pieces of my ski career. 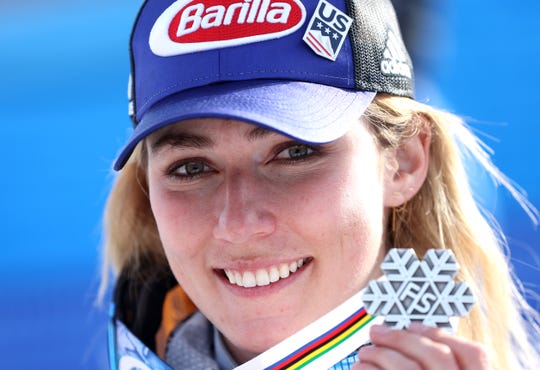 If you didn’t know any better, you could look at Shiffrin’s results last season – one year out from the Beijing Olympics – and not realize how much was amiss. Yes, she had “only” three World Cup victories, but they came in just 16 starts and she made the podium another seven times. She didn’t win any season titles, but she was second in both slalom and giant slalom.

She also became the first skier in 14 years, male or female, to win four medals at the world championships, including a gold in the Alpine combined.

But those accomplishments grow even more impressive when you realize Shiffrin’s life has been a seesaw of that “do or don’t” for much of the last 15 months, ever since she got the phone call that her father had had an accident at home in Vail, Colo.

There is always grief when a loved one dies, but it is unimaginable, almost debilitatingly so, when it comes so suddenly. And when you realize just how much you’ve lost.

As large a role as her mother Eileen, who is one of her coaches, has had in Shiffrin’s career, her father was equally instrumental. He was the one who booked her flights and made the vagabond schedule of a ski racer make sense. He was the one who made sure the bills were paid and the taxes were filed.

By doing all those little things, Jeff Shiffrin made it possible for his daughter to do all the big things. That first Olympic gold at 18, which made her the youngest slalom champion ever. The second gold in 2018, tying her for most by an American skier. The 69 World Cup victories, which trail only Ingemar Stenmark (86) and Lindsey Vonn (82).

Shiffrin, now 26, knew she needed to sit down with her father and learn the details of what he did. But even her off-seasons are filled with workouts and training camps and all the other things required of one of the world’s best athletes.

Besides, she thought they had time.

“The first year was incredibly stressful just trying to get our lives in order, completely different from sport and being a professional athlete,” Shiffrin said. “Life survival mode. That’s where my mind was at.”

The off-season training camps she normally does in California and the southern hemisphere were impossible, both emotionally and logistically because of COVID-19 restrictions. Even as she and her mother prepared to leave for Europe in September, Shiffrin’s heart wasn’t fully in it.

“There was a huge part of me, and I think my Mom felt the same, that thought there was a 50-50 chance we were going to say, `Nope, we’re not going to do it,’” Shiffrin said.

She did go, only to suffer a back injury that forced her to return to the United States. Terrifying as it was – she feared it might become chronic, a non-starter for someone who races on bumpy, icy terrain at speeds of up to 80 mph – it also was somewhat of a relief.

“More than anything, I felt a little bit numb to it. Why does it even matter? Why do I even care?” Shiffrin said. “It felt like the universe was sending sign after sign, 'Go home, take a breath,’ and then … I don’t know. Come back in the middle of the season or come back next season. But don’t push it.”

When Shiffrin did return, in November, she was freed of any expectations.

Shiffrin has never been driven by what others think but rather her own standards, which are the result of her exacting preparations. But she’d had no time to prepare, no ability to train. There were still days she didn’t want to get out of bed, the sadness simply too overwhelming.

Even when she was able to carve out training time, and the grief began to loosen, her reserve of energy remained elusive. Rather than being able to summon another level of intensity for the second run, something that had always been her strength, she found herself drained.

So Shiffrin went into the starting gate knowing that whatever she did on that day was going to be the best she could manage.

“It got better, race after race,” Shiffrin said. “That’s just not a position I’ve ever been in before. I feel like it’s related (to Jeff Shiffrin’s death) because there’s nothing else. It’s like your brain gets to a point and starts switching off. You can’t control your emotions or fears or feeling pressure.”

Shiffrin has always been introspective – and refreshingly open with her thoughts – and plans to spend part of this summer examining what she can do to restore that emotional energy she lost. But she also knows there’s no shortcutting the grieving process, that it’s simply going to take time.

One thing that did help was the response to the Jeff Shiffrin Athlete Resiliency Fund, which raised more than $3 million. As a result, each named U.S. Ski & Snowboard athlete received a one-time payment of $1,300 to help get them through COVID-19.

What began as a way for Shiffrin, her mother and brother to honor Jeff Shiffrin and channel their sorrow soon became a kind of communal therapy. Teammates chimed in with their own experiences and inspirations. People outside the sport reached out to Shiffrin to share their stories and what had helped them.

And it reminded Shiffrin that the human spirit is strong enough to withstand just about anything, even if it seems impossible in the moment.

For Shiffrin, her mother and her brother, life is returning to normal. Or what their normal will be from now on. They might not have mastered all the things Jeff Shiffrin once did – Shiffrin is still trying to figure out how her father found not only direct flights but reasonably priced ones – but they have gotten a handle on them. Last week, Shiffrin joined her teammates for a training camp in California.

“If we can start and follow a somewhat typical program for the summer preparation period, we’ll be starting ahead of the game,” she said. “Or at least not behind.”

There are still days of unbearable sadness for what Shiffrin lost. But more and more, there’s gratitude for what she has left.

“Keep getting out of bed in the morning. Keep doing my workouts and studying my skiing and studying the finance and just try to keep going with life. And appreciate the time I have with the people that I love, and appreciate I’m able to ski race as a profession and that I’m pretty good at it. That’s kind of cool!” she said, laughing.

“Just kind of find things to appreciate and move forward,” she said, “and that’s how we go.”