REIMS, France — There’s no mercy at the World Cup.

Not from the U.S. women, who have waited almost three years to avenge the most humiliating loss in the program’s storied history at the Rio Olympics. Not for a team that has listened to the whispers and rumbles for months now about how the days of their dynasty might be ending and heard since Friday how brilliant and devastating France looked in its World Cup opener.

Was the 13-0 victory over Thailand on Tuesday night absurd? Could the Americans have throttled back after the seventh goal? Or the eighth goal? Or halftime even, when it was 3-0? Sure.

But this is the World Cup, not a rec league. You want a participation trophy or for the big kids to take it easy on the over-matched teams? Go to the local park. The U.S. women have a title to defend and a message to send, and they’re not about to apologize for the aggressive manner in which they do it.

Alex Morgan had five of the U.S. goals, while Rose Lavelle and Samantha Mewis added two each. Thailand had just two attempts, both of which went right to Alyssa Naeher’s hands.

The U.S. women play Chile next, on Sunday in Paris, and the score is not likely to be a whole lot closer. 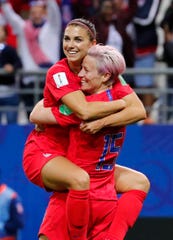 There will be some who say the Americans showed up Thailand and humiliated the world’s No. 34 team. But it would have been far more offensive if the Americans had taken their foot off the gas, the ultimate sign of condescension from a powerhouse team. The Americans see everyone’s best game, and they ought to give as good as they get.

It’s no different than when Clemson, Alabama or anyone else runs up the score on the Football Subdivision patsies in September, and no one bats an eye at those blowouts.

To go easy on Thailand, even later in the game, would have been a cop-out, and could come back to haunt the U.S. later in the tournament. If this was the best Thailand could do, so be it. That’s that team’s problem, not the U.S. women’s.

The Americans are chasing a trophy. If you don’t like that, tough.