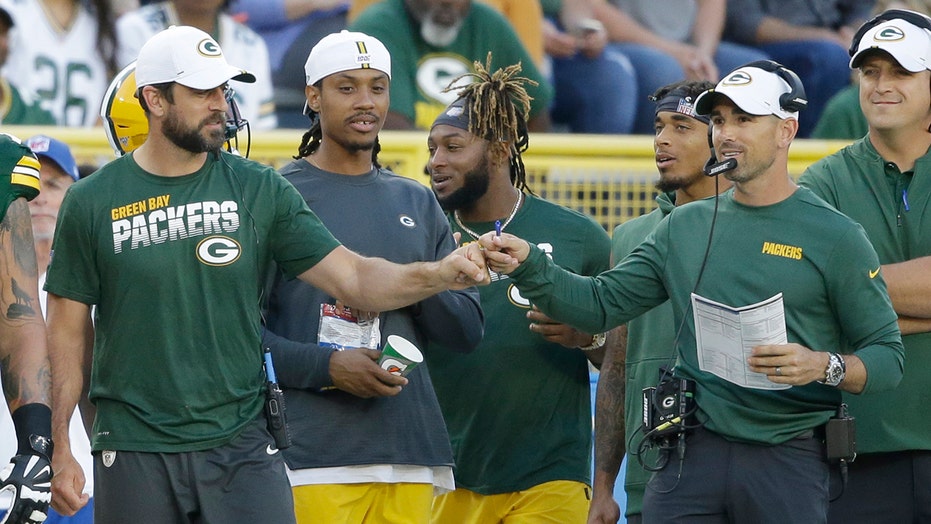 LaFleur made it clear that he wants Rodgers to return to the Packers in 2021. He, along with team president Mark Murphy and general manager Brian Gutekunst, all stressed how important it is to make sure Rodgers remains with the team, but a report surfaced that Rodgers will not return if Gutekunst remains with the team.

Rodgers will reportedly stay away from offseason activities, hold out of training camp and possibly even retire, a source told Yahoo Sports on Saturday. Murphy is aware of Rodgers’ issues with Gutekunst, according to a report.

LaFleur, who has enjoyed a ton of success with Rodgers during his first two seasons as the coach of the Packers, says he “can’t fathom” the quarterback not being in Green Bay.

“I can’t even take my brain to that spot right now,” LaFleur said after the final round of the 2021 NFL Draft via ESPN. “So I just want to do everything in my power to ensure that doesn’t happen.”

LaFleur said: “I don’t only love the player, but I love the person.”

He went on to say that he enjoys working with Rodgers on a daily basis, as do the players in the locker room and the coaching staff.

“I’ll always remain hopeful and optimistic, and certainly, we’ll always welcome him back with open arms,” LaFleur continued. “He knows exactly how, not only myself but our staff and our players, feel about him. Like I said before, I just can’t imagine him not being in a Green Bay Packer uniform.”

According to Yahoo Sports, the main point of contention involves the Packers selecting quarterback Jordan Love in the first round of the 2020 draft without informing Rodgers. Rodgers reportedly gave the Packers’ front office the opportunity to re-commit to him for the 2021 season and beyond. Green Bay was reportedly initially unwilling to commit to anything beyond a restructure of the quarterback’s contract.

According to the NFL Network on Friday, Rodgers would owe the Packers millions from his signing bonus if he does decide to call it quits. The quarterback would reportedly have to repay $11.5 million this year if he retires and another $11.5 million next year if he chose to stay retired.

Additionally, the NFL Network reported, “unless the situation is repaired to his liking, this is a serious consideration.”

NFL Network’s Ian Rapoport also reported that Rodgers’ agent, Dave Dunn, helped orchestrate Carston Palmer’s abrupt retirement from the NFL and the Cincinnati Bengals only for him to join the Arizona Cardinals.

Rodgers has not made any public statement specifically stating whether he wants out of Green Bay.

He told ESPN on April 2 that the future is as hazy as ever as he enters the 2021 season.

“So far, it’s definitely been my team. I said last year I didn’t know if that was actually possible to be able to finish there. I still feel that’s kind of where we’re at. I don’t know that a lot of that is in my hands. I guess we’ll just kind of see as we go,” Rodgers said.

When ESPN anchor Kenny Mayne asked Rodgers to just come out and say he wanted to be a Packer for life, Rodgers replied: “Ken, you and I both know that’s not how it works.”

The Packers paid out Rodgers’ $6.8 million roster bonus last month instead of restructuring it to make more cap space as Green Bay moved into the offseason

Rodgers won the 2020 NFL MVP award. He had a league-leading 48 touchdown passes with 4,299 passing yards and only five interceptions. He hasn’t thrown more than eight picks in a season since 2010.