Paul Hornung, one of the most versatile and glamorous football stars of the modern game, the “Golden Boy” quarterback from Notre Dame who won championships as a running back with Vince Lombardi’s Green Bay Packers but whose image was tarnished by gambling and carousing, died on Friday in Louisville, Ky. He was 84.

His wife and only immediate survivor, Angela Hornung, said that the cause was dementia and that he died at a senior living facility.

Hornung filed a lawsuit in July 2016 seeking damages against Riddell, the longtime supplier of helmets to the N.F.L., saying he was suffering from “dementia and other neurodegenerative disease(s) caused by repetitive head trauma” as a result of Riddell’s failure to inform players that it knew its helmets could not prevent concussions.

The suit said he had incurred numerous concussions while wearing Riddell helmets as a Packer. His case was later consolidated with many others filed by former N.F.L. players against Riddell and was in federal court in the Eastern District of Pennsylvania.

Hornung, who won the 1956 Heisman Trophy with Notre Dame, could run, throw passes and catch them, block, place-kick and punt, and he returned kicks and played defense too. In nine professional seasons he helped propel the Packers to four National Football League championships and led the N.F.L. in scoring from 1959 to 1961. 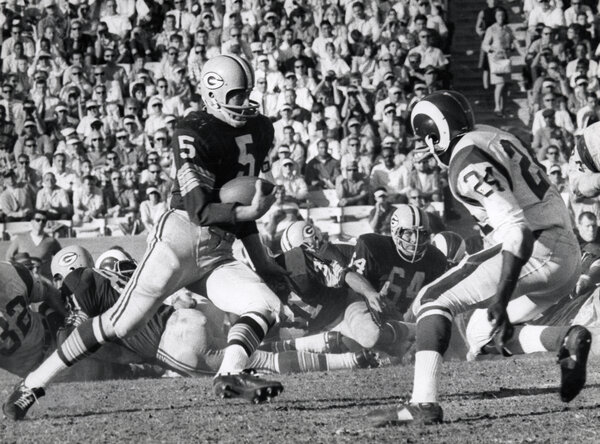 Hornung was the fourth Hall of Fame Packer from the Lombardi era to die this year. The others were safety Willie Wood (in February), defensive end Willie Davis (in April) and cornerback Herb Adderley (in October).

Hornung scored a record 176 points in the 12-game 1960 season on 15 touchdowns, 41 extra points and 15 field goals. He also passed for two touchdowns that year.

Hornung was the league’s most valuable player in 1961, when he scored a championship-game record 19 points (on a rushing touchdown, four extra points and three field goals) in the Packers’ 37-0 victory over the Giants.

All the while he pursued a robust night life of women and drink that seemed to have little effect on his on-field performance. His movie-star looks certainly had something to do with the attention: He was blond and handsome, 6 feet 2 inches and 215 pounds. He wore No. 5 in honor of his boyhood idol, Joe DiMaggio.

But Hornung’s career was marred when the N.F.L. commissioner, Pete Rozelle, suspended him indefinitely in the spring of 1963 for gambling on pro football, including Packer games, over several seasons. Hornung said he had bet on Green Bay only to win, and the league found no evidence to the contrary, but he remained suspended for the entire season. The ban was an outgrowth of an N.F.L. drive against gambling by players that also brought a one-year suspension for Alex Karras, the Detroit Lions’ star defensive tackle.

Hornung had to wait until 1986, his 15th time on the ballot, to be selected to the Pro Football Hall of Fame, evidently because of his suspension.

“I don’t see this as Paul Hornung being vindicated,” he told The Associated Press when he was finally elected to the hall, in Canton, Ohio. “I never considered myself a villain, but obviously some people did.”

When Hornung was inducted, his Packer Hall of Fame teammates marveled at his accomplishments.

“I’ve never seen a guy more effective inside the 20-yard line,” the former Green Bay offensive tackle Forrest Gregg told The A.P. “You could hand off to him or throw a pass to him and somehow he would get the ball in the end zone.” Bart Starr, the Packer quarterback, called him “one of the best clutch players ever.”

Paul Vernon Hornung was born in Louisville on Dec. 23, 1935, and raised there by his divorced mother, Loretta Hornung. He was recruited out of high school by Bear Bryant, then the head coach at the University of Kentucky, but chose Notre Dame to please his mother, who was a devout Roman Catholic.

In his junior year at Notre Dame, Hornung was primarily a running back and a safety. As a senior, switching to quarterback, he ran or passed for 1,337 yards and continued to excel in the defensive secondary. He became the first player to win the Heisman Trophy with a losing team: Notre Dame had a 2-8 record in 1956.

The Packers, having floundered for many years, continued to struggle in Hornung’s first two pro seasons, but everything began to change in 1959, when Lombardi, formerly the Giants’ offensive coach, was named head coach at Green Bay.

Lombardi preached discipline, but Hornung, free-spirited as he was, became one of his favorites, and he installed him at left halfback, the key man in what became Green Bay’s signature play, the Packer sweep.

The offensive linemen — Jim Ringo at center, Jerry Kramer and Fuzzy Thurston at guard, Bob Skoronski and Gregg at tackle, and Ron Kramer or Gary Knafelc at tight end — along with fullback Jim Taylor, a superb runner in his own right — supplied the blocking. Hornung would run wide, then look for a hole, but he might also throw to receivers like Boyd Dowler and Max McGee, who was often his pal on the nightclub scene.

The Packers defeated the American Football League’s Kansas City Chiefs, 35-10, in the first Super Bowl, played at the Los Angeles Coliseum in January 1967, but by then Hornung had reached the end of his career. Hampered by arm and knee injuries, he didn’t play in the game. The New Orleans Saints selected him in the 1967 expansion draft, but he retired because of injury problems.

He later invested in real estate and other business ventures, became a popular figure in Miller Lite beer commercials and broadcast college and pro football. He created a stir in a March 2004 interview with a Detroit radio station when he said that Notre Dame needed to ease its academic standards to “get the Black athlete.” A spokesman for Notre Dame called the remark “insulting.” Although Hornung expressed regret for the comment, he discontinued his broadcasts of his alma mater’s games for Westwood One radio, saying that “Notre Dame does not want me there.”

His wife, Angela (Cervilli) Hornung, also sued Riddell in 2016, citing the loss of Hornung’s companionship because of his disabilities. His first marriage, to Patricia Roeder, ended in divorce. He had no children from either marriage and no siblings.

In his autobiography, “Golden Boy” (2004, with William F. Reed), Hornung alternated accounts of his football feats with tales of his amorous conquests and his drinking.

He said that his playboy reputation had caught the attention of the syndicated gossip columnist Walter Winchell, who wrote in an early 1964 item: “Myrna Loy is being rushed by Paul Hornung, the football glamour boy. He long distances the one-time Hollywood star from his Old Kentucky Home.”

Hornung told a reporter who inquired about the item that he had never even spoken to Ms. Loy and that Winchell might have confused her with an aspiring actress named Myrna Ross, with whom he had one date.

“I’m sure that during my playing days I wasn’t considered a good role model for the nation’s youth,” he wrote in his memoir. “But the way times have changed, I’d look like an altar boy if I played today. I never beat up a woman, carried a gun or a knife, shot somebody, or got arrested for disturbing the peace. I never even experimented with drugs during the season.

“All I did, really,” he went on, “was seek out fun wherever I could find it. Everything was all tied in together — the drinking, the womanizing, the partying, the traveling, the gambling. And, of course, football made it all possible.”