Phil Linz played on three World Series teams with the Yankees in the 1960s and spent seven seasons in the major leagues.

But he was remembered mostly for playing the harmonica.

Linz was usually a fill-in at shortstop, third base or second base, and occasionally in the outfield, bringing him the nickname Supersub. But in the summer of 1964 he briefly became a baseball celebrity of sorts.

On the afternoon of Aug. 20, the Yankees were on the team bus heading to O’Hare Airport in Chicago for a flight to Boston to play the Red Sox after losing four straight games to the White Sox while in a tight pennant race.

Linz was sitting at the rear of the bus practicing on a harmonica he had bought earlier in the road trip.

It came with a learner’s sheet, and the first tune was “Mary Had a Little Lamb.”

Manager Yogi Berra, seated up front, was hardly in the mood for frivolity in view of the Yankees’ slump and shouted toward the back of the bus, “Shove that harmonica up!”

So he sought help from Mickey Mantle, who was sitting across from him. “I asked, ‘What did he say, Mickey?’”

Mantle, quick to seize an opportunity for a practical joke, told him that Berra had said, “Play it louder.”

So Linz played on.

Berra charged toward Linz, who either flipped his harmonica toward him or had it swatted away by Berra; accounts differ.

“I went in and apologized to Yogi the next day, told him it was disrespectful, shook hands and promised it would never happen again,” Linz remembered. “Yogi said, ‘I still got to fine you.’ He fined me $250. It was all right. I was making $14,000.”

By then, the New York sportswriters who were on the Yankee bus had filed stories describing the episode, and The Associated Press had spread its account to newspapers throughout the country. 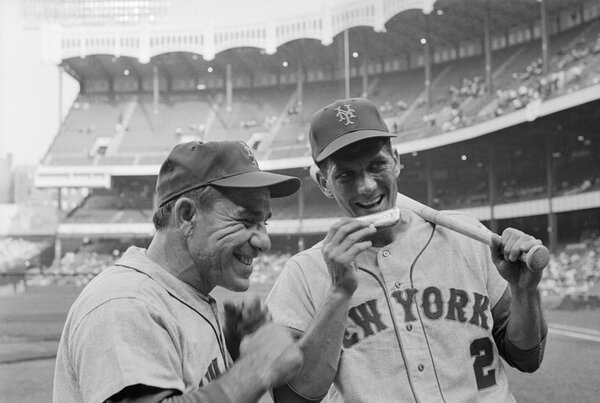 Linz died overnight — either late Wednesday or early Thursday — at 81, his former Mets teammate and business partner Art Shamsky said on Thursday, relaying the news from Linz’s wife, Lynn. She said he died in Virginia, but no other details were given.

After the harmonica incident, the Yankees went on to post a 22-6 record in September, their pitching buttressed by the arrival of Mel Stottlemyre, who went 9-3 following his August call-up from the minors, as well as by Whitey Ford’s recovery from a bruised heel and the September acquisition of the Cleveland Indians’ Pedro Ramos, who was credited with eight saves.

With a rotation that also included Jim Bouton and Al Downing, the Yankees won the American League pennant, finishing one game ahead of the White Sox.

Linz — who often played shortstop that season in place of Tony Kubek, who was limited by back and neck injuries and then sprained a wrist — started against the St. Louis Cardinals in every game of the World Series. He hit two home runs, one off the intimidating Bob Gibson, but the Yankees lost to the Cards in seven games.

Berra, the longtime Yankee catcher who was a future Hall of Famer and a beloved figure in the baseball world, was fired as manager the day after the Series ended and replaced by Johnny Keane, the Cardinals’ manager. Ralph Houk, the Yankees’ general manager, gave no reason for the stunning moves. (The Yankees, heading into some lean times, would not appear in another World Series for 12 years.)

Philip Francis Linz was born on June 4, 1939, in Baltimore, the son of a metals refinery mechanic. He was signed by the Yankee organization out of high school and made his debut with the team in April 1962.

The Yankees traded Linz to the Philadelphia Phillies after the 1965 season. The Phillies sent him to the Mets in July 1967 (by then Berra was a coach for the Mets), and he retired after the 1968 season with a career batting average of .235 and 11 home runs.

Linz had a stroke in 2015 and in recent months had been living at a nursing home in Maryland. He and his wife had a son, Philip. Complete information on survivors was not immediately available.

After his playing days, Linz joined with Shamsky as owners of a popular restaurant and night spot, Mr. Laffs, at First Avenue and 64th Street on Manhattan’s Upper East Side. He kept the business going for more than 20 years.

“It became the postgame destination for Knicks and Rangers and all those who basked in their reflected glory,” Sports Illustrated recalled in 2005.

Linz also sold insurance in Manhattan while living in Stamford, Conn. He appeared at baseball shows over the years to retell the story of an ordinary ballplayer and his famous harmonica.

When the Yankees’ 1965 yearbook came out, Linz had an encore for Yankee fans. In an advertisement paid for by Hohner, he was depicted on the back cover in his Yankee uniform with a harmonica. The caption read, “Play It Again, Phil.”