In the end, he did it the Phil Mickelson way. He did it with birdies and bogeys and by holing a bunker shot. Amidst a cacophonous scene of joyous, unconfined emotion at the 103rd USPGA Championship, he took his brilliant career to another level, tearing up the record books and making us rethink convention.

This was the 456th major championship stretching all the way back to 1860, and now we have the first winner over the age of 50. It was his sixth major triumph, eight years after his last one at the 2013 Open, and it takes him alongside Sir Nick Faldo on the all-time list of legends.

He did it by destroying Brooks Koepka, the best major golfer of the last decade. He did it with meditation and chewing gun and a pair of aviator shades that couldn’t hide the steel. 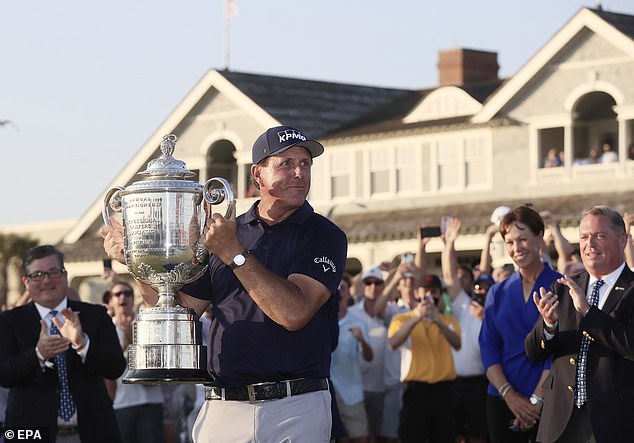 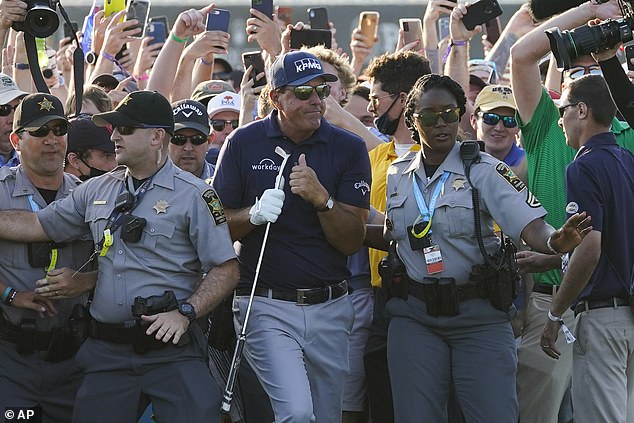 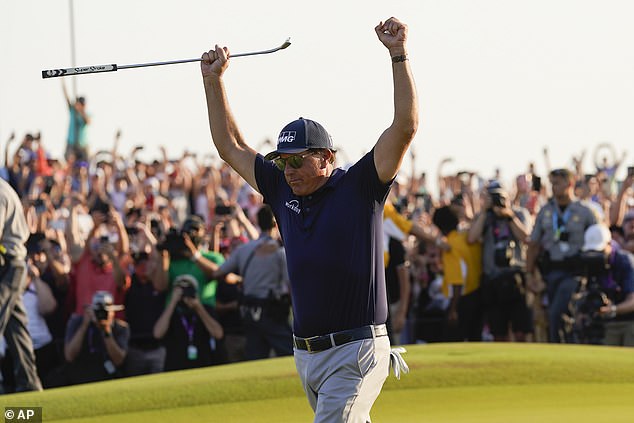 He did it by demonstrating that Phil the thrill is most definitely not over the hill.

Following his two stroke victory over Koepka and Louis Oosthuizen, Mickelson will now celebrate his 51st birthday at his hometown US Open in San Diego next month, not as the recipient of a special exemption but the proud holder of the Wanamaker Trophy. Six-times a runner-up in his national championship, he will be trying to complete the career Grand Slam and prolong the season of miracles.

Here beside the Atlantic, they call this magical area of America the Low Country. Now it’s the Low Country for Old Men. What a day. What a week. What a story.

Two years after Tiger Woods’ incredible 15th major success at the Masters, the man who spent 20 years in his shadow has come up with something every bit as remarkable, another tale that will transcend the sport and put it on front pages in America as well as the back. Here’s a sports story to make anyone forget the pandemic. 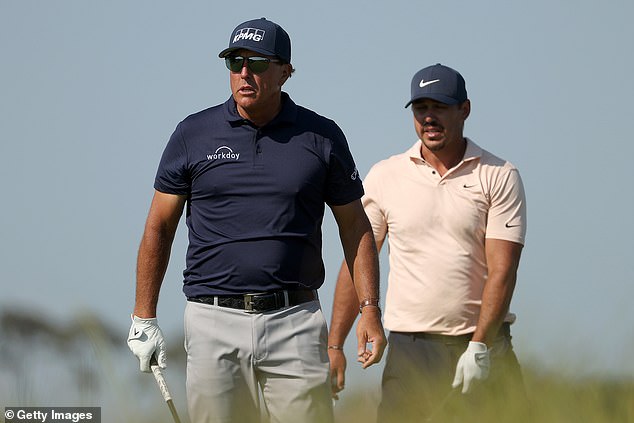 Naturally, it was a rollercoaster ride in the capricious breezes. Brilliance mixed with excruciating lapses. When is it ever anything else with the mercurial Mickelson? One shot ahead at the start of play, he was one stroke behind after one hole, a bogey to Koepka’s birdie.

The natural order of things asserting themselves? Not a bit of it. At the par five second, Koepka ran up a double bogey to Mickelson’s birdie. So the rocky ride began with two stroke swings or more occurring on no fewer than five of the first 10 holes.

The highlight undoubtedly came at the par five fifth, and one more exquisite example of the greatest short game of all, as Mickelson’s bunker shot fell into the hole. What a roar accompanied the moment. Major championship golf. There’s nothing like it. With the terrifying back nine to play, Mickelson had a two shot lead.

It was five with six holes to play. Koepka looked gone. Former Open Champion Oosthuizen was leaking fuel. All over? Mickelson ran up back to back bogeys. He never makes it easy. 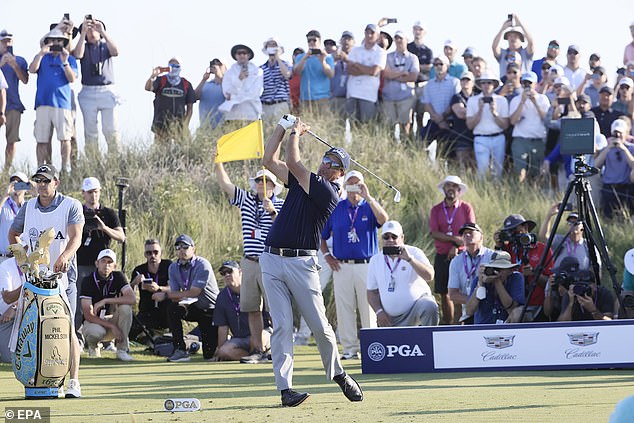 MY KIAWAH HIGHS AND LOWS

Thirty years on from its unveiling at the fractious 1991 Ryder Cup, my how this venue has blossomed. I have always been a Pete Dye fan and this might prove his most masterful design. A truly original test and now one of the great courses in American golf.

May date PERFECT for major

When this tournament switched from August, meaning all four majors would take place in consecutive months from April, it seemed an act of lunacy. Now, it is looking inspired. If you must hold three majors in America then how much nicer to have one in the spring, rather than an annual sweat bath.

Whoever thought hearing, ‘Get in the hole!’ would be sheer bliss? What a joy to have a blast of normality as 20,000 fans, all without face coverings, revelled in the excitement. The noise on Saturday, as Phil Mickelson performed his magic, brought a tear to the eye for what we have missed.

Time for Daly to take a back seat

Yes, it was the 30th anniversary of John Daly’s fairytale triumph in Indiana and we have enjoyed the immense colour he has brought to the game. But enough is enough. Daly (right) cannot walk 18 holes any more and shot rounds of 86 and 85 from his golf cart. Given his own story of how he got to play in 1991 – he was eighth reserve at the start of the week – he should know it is time to step aside.

Well, the PGA of America cannot say they were not warned. Every caddie worth his salt had told them that allowing the use of range finders to measure distance would slow the game down, not speed it up as intended. And, as usual, the caddies were right. Four hours 40 minutes for a two-ball on Saturday? That is just crazy.

Lack of diversity a big worry

The fabulous crowds consisted of people of all ages and it looked a pretty even split between men and women. The one worrying aspect was that virtually everyone was white. As we approach the 25th anniversary of Tiger Woods’ debut as a pro, it is a sad fact that the game has still not come close to crossing the racial divide.

Time for some brilliance. At the par five 16th would you believe, the 115th ranked golfer in the world, playing in his 114th major, unleashed the longest drive seen on the hole all week. The roar of the adjacent ocean was no match for the one from the fans. ‘Come on Uncle Phil!’ screamed one cheeky youngster.

The birdie that followed meant a three stroke cushion, and now he could finally breathe more easily. Surrounded by his adoring public, the place erupted when one final glorious iron found the middle of the 18th green to seal it all. Mickelson pumped his fist in triumph. He knew it was all over.. ‘Lefty! Lefty!’ they yelled, over and over again.

Thirty years after his first victory on tour, he was a major winner once more. Thumbs up to Phil.

Paul Casey followed up his runner-up finish last year with tied fourth place alongside Open Champion Shane Lowry and fellow Irishman, Padraig Harrington. The latter believed events on the Ocean Course would be the perfect audition for those hoping to make his Ryder Cup team, but it was the non-playing captain who made the biggest impression.

While Rory McIlroy was already on the plane home after a ‘very average’ week, the 49-year-old was holing a chip shot from beside the 14th green to move to the fringes of contention.

Harrington played the first two rounds in the company of Mickelson and clearly emerged feeling inspired by his fellow veteran. The Dubliner was playing at the weekend at a major for the first time since the PGA five years ago. The last time he mustered a top 10 was in the US Open in 2012.

Here he showed all the guile and intensity of a man who won successive Opens in 2007 and 2008, as well as following the latter triumph with the PGA a month later.

The reason he had flagged up this event for his team was that it asks the same questions as the Ryder Cup venue, Whistling Straits, also designed by Pete Dye. It was Harrington who came up with the most answers.

With four holes to play, he knew if he could find one more birdie he’d post a formidable total. A tugged iron at the 15th, alas, led to a bogey. Still, what a display. Honours might have been shared with Lowry and Casey but the kudos surely went to Harrington.

McIlroy’s week fell so far short of expectations that he was planning on being back home in Florida in time to watch Mickelson and Koepka play the back nine. He rather stated the obvious by dismissing his week as ‘very average’ after finishing off with a level par 72 and acknowledged that his swing adjustments under new coach Pete Cowen have some way to go before he can compete on a course as tough as this one. The Northern Irishman will spend this week practising at home before playing in Jack Nicklaus’s Memorial Tournament – then it’s on to the next major, the US Open.

At his beloved Torrey Pines, do you think Uncle Phil might get a decent reception?