OAKLAND, Calif. — It was another classic Andre Iguodala moment in his reincarnation as the Golden State Warriors’ playoff sage — before, during and after the dagger 3-pointer he rattled in as the final seconds of Sunday’s game ticked down.

You couldn’t miss the way Iguodala hesitated when he caught the ball even though he was all alone on the left wing. Or the way he got the shot to ring around the rim and drop even when recent form suggested he wouldn’t. Or how he tried to say afterward that he had achieved nothing at all.

“I was happy for Shaun,” Iguodala said, referring to his teammate Shaun Livingston, who passed him the ball without even looking in Iguodala’s direction. “He made the right play. That’s it.”

That, of course, is not it. The shot that sealed Game 2 of the N.B.A. finals, after Iguodala had missed 13 of his last 14 attempts from 3-point range, is bound to go down as his biggest on the game’s grandest stage, as long as Golden State wins this series against the Toronto Raptors. Or unless Iguodala tops it in the next week or so.

In eight seasons in Philadelphia, he made just one All-Star team and never led the 76ers to more than the 43 wins they managed in his rookie season, when he was an understudy to Allen Iverson. With Golden State, teammates expect Iguodala to nitpick like a coach on the practice floor and in film sessions, make every big play when the opportunity arises in the real games and insist in the aftermath that no one should be terribly impressed.

Yet it turns out that, in Year 6 for him in the Bay Area, there is at last something on the Iguodala résumé that fills him with a (gasp) sense of pride. Win or lose this series, Iguodala’s first book — “The Sixth Man,” written with Carvell Wallace — will be published June 25.

Which means that you will soon be able to address the three-time champion and defensive specialist as follows: Andre Iguodala, author. 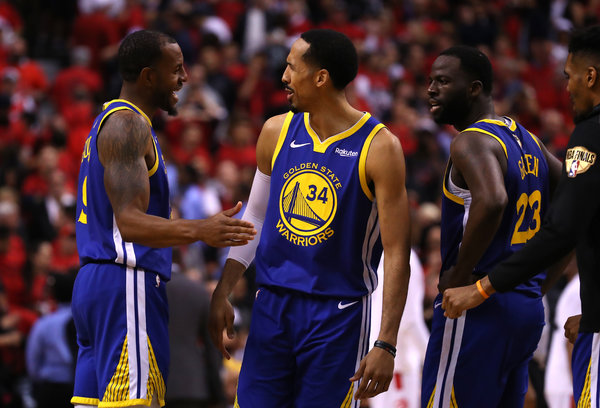 Those who have followed the Warriors’ story throughout their five-year run of title contention might see Iguodala as an unlikely candidate to have produced the first book among the 38 players who have come through the team’s doors in that period. Iguodala, after all, has been known to joust with members of the news media who pry too much and speaks often of his disdain for what he refers to as “the machine” — season after season of the Warriors’ leading the league in scrutiny.

“For five years, it weighs on you,” Iguodala said, adding: “We’re not looked at as actual human beings. But that’s the gift and the curse.”

He continued: “The gift side is that we see more and more conversations about the game, which in turn brings in more revenue.”

Iguodala is careful to insist that “The Sixth Man” and its 256 pages should not be billed as a tell-all. He sees the book as a journey to unpack “the foundation that was laid for my brain to work the way it does.”

“It’s more or less like therapy,” Iguodala said. “You realize a lot about yourself.”

Maybe Iguodala needed the two-year exercise of retracing his youth and career path after operating for so long, in the oft-cited words of Warriors Coach Steve Kerr, as Golden State’s “adult in the room.” It’s typically Iguodala, 35, who provides counsel and direction for younger colleagues. Yet he has increasingly contemplated retirement and has vowed to leave the game sooner rather than later even if, as the Warriors expect, Iguodala decides to play next season, finishing out a three-year, $48 million contract.

“I have a good idea how much longer I want to play,” Iguodala said. “I’m keeping it to myself, but it’s going to be soon. I can play four or five more years. But I won’t.”

That’s Andre. Quotes like those are why he is routinely described as a contrarian, an instigator and, yes, a cynic. But from within team boundaries, only reverence spills out.

“Andre is as highly respected as anyone in the N.B.A.,” said Bob Myers, Golden State’s president of basketball operations. “He’s respected as a player, as a teammate, as an intellectual, as kind of a pioneer in terms of what he’s doing off the court. He’s someone that’s always kind of searching, educating himself, and he’s very socially aware.”

And destined for the Hall of Fame?

Myers was chosen by his peers as the N.B.A.’s executive of the year in 2017, after the Warriors signed Kevin Durant away from the Oklahoma City Thunder, but he won the same award in 2015 after this group won the first of its three championships over four seasons.

His first big score as the lead voice of the Warriors’ front office was the 2013 summer sign-and-trade to acquire the free agent Iguodala, which was possible only after Myers released two veterans (Jarrett Jack and Carl Landry) and persuaded the Utah Jazz to absorb the contracts of Richard Jefferson, Andris Biedrins and Brandon Rush via trade by also surrendering two first-round and two second-round draft picks to Utah.

Iguodala was represented in those days by Rob Pelinka, now the Los Angeles Lakers’ general manager. Myers warned Iguodala and Pelinka repeatedly during negotiations that he feared Golden State wouldn’t be able to create the salary-cap space for Iguodala’s new contract.

A former agent himself, Myers felt compelled to advise them to take one of the offers on the table (from Dallas, Sacramento and Denver, Iguodala’s most recent employer) rather than miss out on the money if the Warriors could not manufacture the necessary salary cap space.

“He chose us more than we chose him,” Myers said of Iguodala. “We obviously met with him and wanted him, but they hung in there with us. Andre had a vision for what we could be maybe before we even did and how he could fit with us. I always credit Andre for being somebody that believed in us even before we believed in ourselves.”

The marriage has clearly been mutually beneficial. Iguodala had nothing close to a Mr. Clutch reputation when he arrived in Oakland, but his work as a defensive stopper against the game’s biggest stars and his undeniable contributions to a budding dynasty seem to inspire a robust debate during every N.B.A. finals about his case, even as a role player, for Hall of Fame enshrinement.

It’s a dramatic turn from his Philadelphia days, when Iguodala — as covered in the book — endured “most hated athlete in town” status for falling short of true franchise-player branding as Iverson’s successor.

“It’s interesting now because, when I go back to Philly, I’m really embraced,” Iguodala said. “When I was there, it never really felt like home. It just shows how sports work. When you win, when you have success, everyone wants to be part of it.”

‘Perfectionist’ may be mellowing

With the Warriors, Iguodala has also found a kindred spirit in Ron Adams, Golden State’s seen-it-all, truth-telling assistant coach. The Warriors may be known for the joyful brand of basketball they have so often played under Kerr, but Iguodala and Adams, 71, share a favorite saying when it’s time to get serious: Forget fun.

The word they use in place of “forget,” mind you, is an expletive that starts with the same letter.

Said Iguodala: “I’m a perfectionist but not within myself — within the team. I’m never satisfied. We could win eight games straight and we’re watching film and I’ll say, ‘We still ain’t got it yet.’”

In typical Iguodala fashion, he insists he has only looked at his 2015 finals most valuable player trophy “four or five times” and isn’t totally sure where it is after a recent move. And he won’t deny that he generally greets the outside world with a “shield-up, pessimistic outlook.”

But Iguodala may be softening some. In his early days under Kerr, who asked him to accept the sixth-man job for the good of the group, Iguodala routinely shot down any suggestion from reporters that he was a natural in that role. Now it’s the title of his first book.

“It’s kind of like the nickname Iggy, which I always hated,” Iguodala said. “I was always like, ‘Stop calling me that.’ I don’t hate it as much as I used to — I don’t mind if people who know me call me Iggy. You just learn to embrace it.”