Roy Keane is filmed having furious confrontation with Manchester United fan who called him ‘an absolute pr***’ at Old Trafford after derby defeat, as Sky Sports pundit blasts ‘you’ve had a few drinks, they got beat and now you take it out on me?’

Roy Keane was seen angrily confronting a Manchester United fan who called him a ‘pr***’ outside Old Trafford following the team’s defeat by local rivals Man City on Saturday.

Former United captain Keane, 50, who was at the game working as a pundit for Sky Sports’ coverage of the game, was giving a supporter his autograph on a shirt when the fan approached him and criticised the retired Irish player.

Keane angrily accused the fan of being drunk on ‘two pints’ and at one point took a couple of steps forward to nearly square up to the man in question.

In a video posted on social media, the fan said: ‘You’re a legend of this club.’

Keane then responded: ‘What am I trying to do? Hang around all day and sign autographs? I’ve signed autographs!’

The fan then responded: ‘Why are you being like that?’ to which Keane angrily said with his arms open: ‘Like what? Like what? What did I do?’ 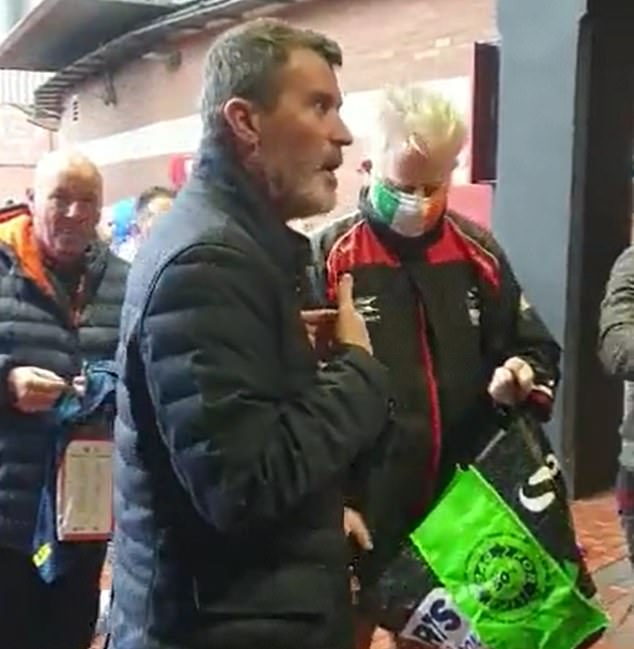 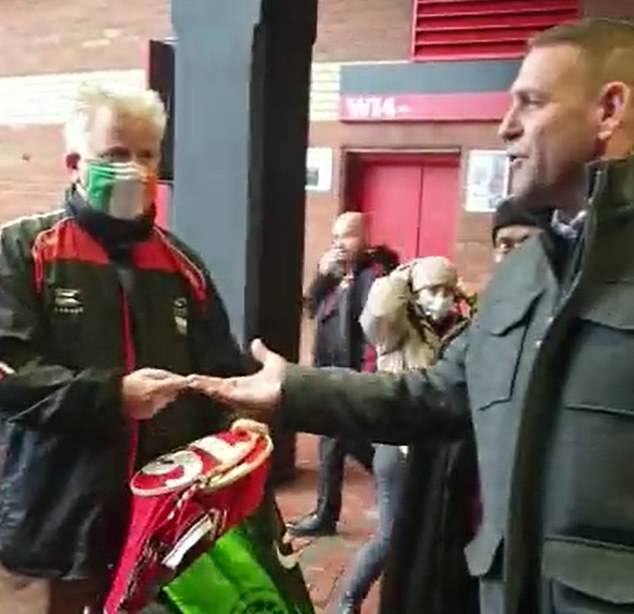 Fan: You’re a legend of this club.

Keane: What am I trying to do? Hang around all day and sign autographs? I’ve signed autographs!

The supporter jibed: ‘An absolute pr***’ which angered Keane even more.

The former United midfielder took a couple of steps forward saying: ‘Oh, because you’ve had a few drinks and they (United) got beat you’re taking it out on me? What’s that got to do with me?

‘You’ve had a few drinks, I can tell. What have you had, two pints? Tell all your mates not to lecture me.’

The Sky Sports pundit then strolled out into the rain outside Old Trafford, right into a packed area of United fans leaving the stadium after the 2-0 defeat.

Manchester United fan Darren Russell, who took the social media video of Keane on Saturday, told Sportsmail: ‘Keane wasn’t in a bad mood at all. I’m sure he was disappointed with the result like the rest of us, but he wasn’t unreasonable at any time.

‘He was stood there in the rain signing autographs for some of the fans when that other guy started. I’m not exactly sure why, but I think he was impatient because Keane hadn’t got to him yet.’

Keane’s former club United, where the Irishman spent 13 years of his career at including eight years as captain before his 2005 departure, were beaten by reigning Premier League champions City in what is another dent to their season. 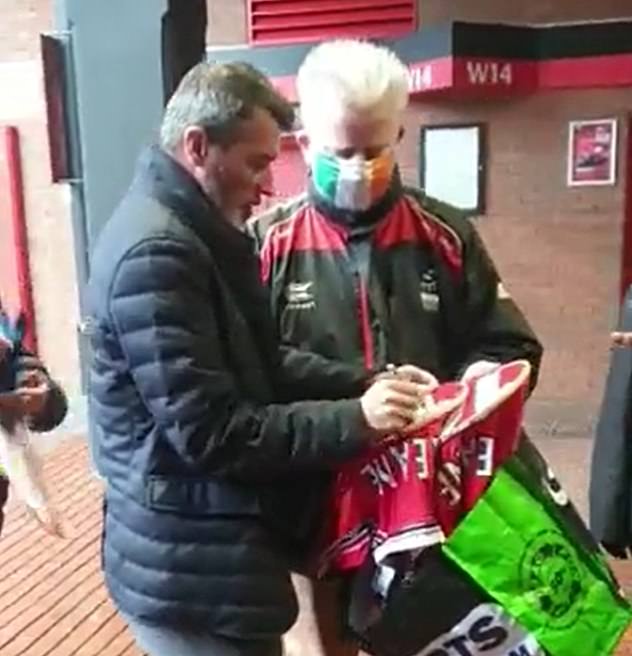 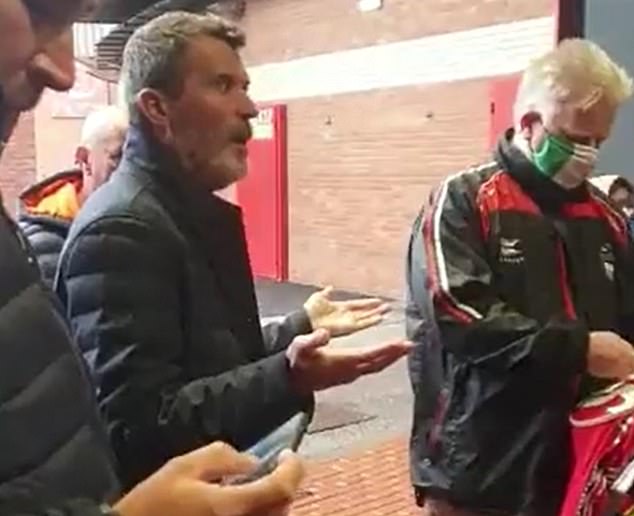 Keane told the fan ‘because you’ve had a few drinks and they (United) got beat you’re taking it out on me?’ 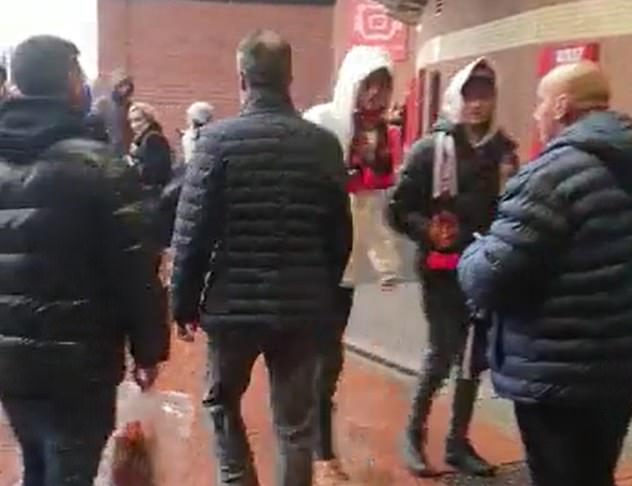 An early own goal from Eric Bailly put United behind after a few minutes before Bernardo Silva’s strike just before half-time was enough to earn Pep Guardiola’s City side the victory.

Keane was already furious with Saturday afternoon’s result and furiously blasted the Manchester United players live on Sky Sports for their defending.

‘This defending – not enough pressure, you need to put pressure,’ an animated Keane said live on air. ‘It’s nearly half-time, stay in the game! Look at Shaw here, the goalkeeper – I’ve been cross with these fellas for years.

‘I give up on these players. These are international footballers! I can’t understand the defending – I give up… Really so poor, difference in class, quality, decision-making, everything. It was men vs boys. United are so off it, it’s unbelievable. It should be a difficult place to come – it’s not. Teams are coming here and getting joy. 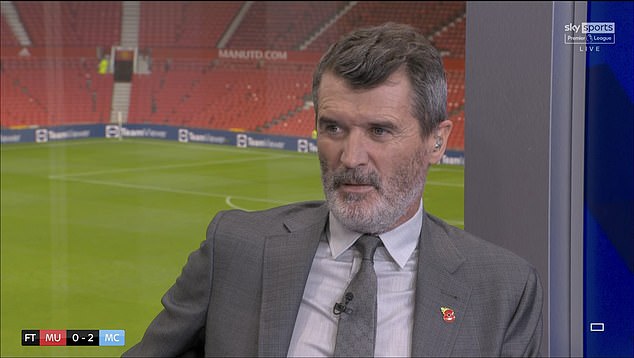 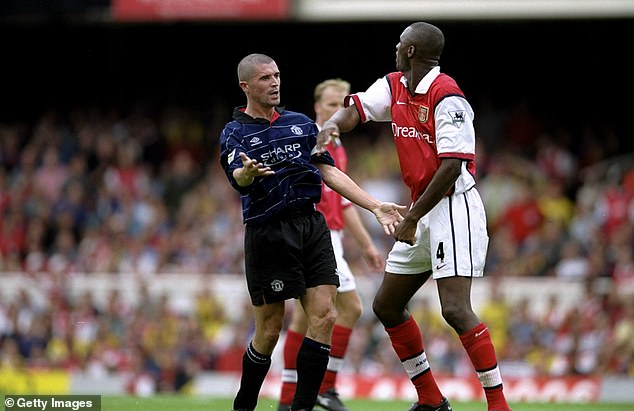 Keane (left), who spent 13 years at the Manchester club, was a fierce competitior as a player

‘I know they’ve been doing away but ultimately it’s what you do at home that builds the foundations and wins you trophies. Goal at half-time – United just need to go into half-time at 1-0. Second goal it’s game over. I don’t know what to say, it’s just so poor.

‘McTominay, Fred, these players aren’t good enough for Manchester United. I wasn’t shocked Bailly sliced at it, he’s got that in him, he’s erratic. I looked at Foden after the game, you should be exhausted after a derby game. You should be drained, should have no energy left. He talked like he had a practice game.’

Keane admitted in an interview with Gary Neville on his Overlap YouTube channel that he dislikes being in the public eye and does not like fans coming up to him and asking him for autographs or pictures of him.

‘Being in the public eye, I detest it,’ he said earlier this year. ‘I hate it. People can be polite or stick a phone (up) and following you with a camera and then people think you’re rude. I’m the rude one and you’re coming up? 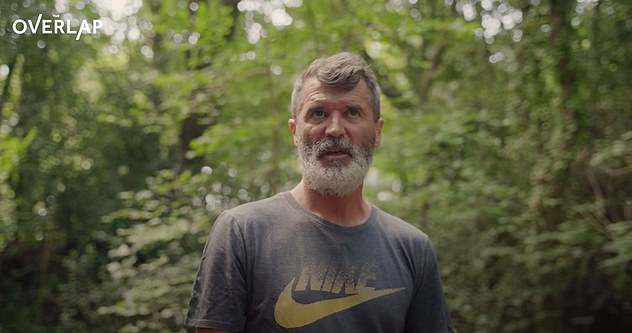 ‘I bumped into a United fan the other day and he showed me his tattoo and he said “Alright, bye” and then walked on. That’s a proper fan. People who invade you with your phone or (signing) your jerseys, you’re just annoying.

‘I think it’s because people are busy and they see you as someone in the public eye and it’s like “can I have a piece of you?” or “can you sign that?” Even City fans come up and want a photograph. You want a photograph of me? Why?

‘To me it’s a busyness thing. It’s not a respect thing. People who respect you leave you alone.’